Notices on the bulletin board

Seems like every time I begin a new blog post around the ol’ TDOY ranch it usually kicks off with an apology for not posting more often…so today’s entry is no exception.  With the month of September rolling in, I have a trunkful of assignments that I’m trying to get an early start on…notably a new Radio Spirits collection (that would be the paying gig) that’s due in a couple of weeks, so while I’ve been working on that the blog fields remain fallow. 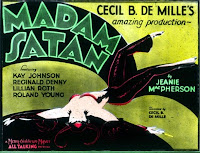 But one of those projects that I completed ahead of schedule is now up at She Blogged by Night—yes, while pal Stacia continues snorkeling off the coast of the tropical paradise known as Tourist Trap Bay, guest stars have invaded her ‘umble scrap of the blogosphere and I was granted the privilege to do a second post…this one on a cult film that she was nice enough to make a copy for me, Madam Satan (1930).  If you read this, I don’t want you to get the impression that I didn’t enjoy watching this movie because I did get a tremendous kick out of it—it’s just there are some moments in the film that are a little slow (anytime I don’t care whether the romantic leads get together or not is never a good sign), which is pretty typical of a lot of the product cranked out in the early talkie era.  I laughed out loud at Stacia’s introduction to my guest post because she wrote: “Interestingly, this post documents the exact moment Ivan realized that I have really horrible taste in movies.”  (I found it funny because I actually learned this tidbit about the time she recommended I watch Skidoo. Thank you and good night, everybody!)

I received a nice pre-birthday present from my father today, courtesy of FedEx—he saw an HP F4500 printer/copier/scanner/coffee machine/weather station on sale in some catalog and ordered me one for my natal anniversary.  What Dad did not realize, however, was that the unit was “refurbished”—which is a technical term meaning “not new.”  This matters very little in the overall scheme of things, I needed a scanner (my old one died shortly before the move to in 2008) and once I figured out the intricacies involving the machine’s ink cartridge system (the set-up is definitely not one of Hewlitt-Packard’s finer hours) everything started running like a top. 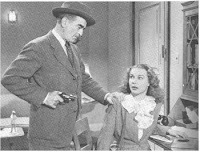 And speaking of the move to Athens in 2008 (okay, that one might need a little work) apparently my coveted DVD copy of The Phantom Creeps was a victim of that redeployment three years ago—it’s got to be in one of several boxes containing DVDs that is now being held hostage in Dad’s storage area because I’ve turned our current house upside down and can’t find it to save my life.  As such, this necessitates a switch in the entry I had planned to do for the Classic Movie Blog Association’s Guilty Pleasures Blogathon—I e-mailed Rick to notify him of the program change, which will now be Brenda Starr, Reporter…the “lost” 1945 Columbia cliffhanger serial that was located in the Library of Congress a few years back and released to DVD by VCI Entertainment.  And though it’s going to be a bit tight, I’ve also found a pair of films that I can review for the Juxtaposition Blogathon at Pussy Goes Grrr beginning September 12th: The Fuller Brush Man (1948; with Red Skelton) and The Fuller Brush Girl (1950; with Lucille Ball).

While researching a post at Thrilling Days of Yesteryear’s old Salon Blogs neighborhood yesterday, I discovered something…well, mildly shocking.  The neighborhood…ain’t there anymore.  (They’ve even razed the Church’s Chicken!)  The previous four years of TDOY has vaporized into the Internets ether, and though I’m fortunate in that when the Net Gods created Google they also judiciously created its cache properties it means that all the links to previous posts here at the Blogger incarnation of TDOY are finished. (Fertig! Verfallen! Verlumpt! Verblunget! Verkackt!)  This also means I need to step up production on TDOY’s “spin-off” blog, which is proving to be a Herculean labor beyond my expectations. 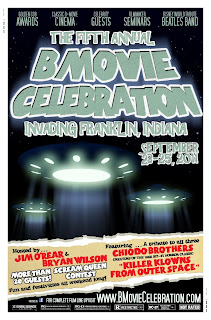 Finally, I was sent a press release yesterday regarding the Fifth Annual B-Movie Celebration, held in yearly and this year will get underway from September 23-25.  I put up a notice about this amazing event practically every year here on the blog but since this is the first time in recent memory someone took the time to give me the complete skinny, I will present it here for your edification:
As we all know, the B-Movie has had a long and humble tradition beginning with the double features of the 1930s and 40s where a lower-budget production would be used to fill the bottom half of a double bill. Within that time, there were hundreds of low-budget westerns, horror features, comedies and even film noir (“Detour” from 1946, for example) filled screens and entertained audiences as companies like Republic, Monogram, PRC and Lippert kept them coming.
The drive-ins came along in the late 40s and 50s and soon more companies came to meet the demand like American International Pictures, who were best known for their monster flicks, teenage juvenile delinquency pictures, sci-fi epics and beach party movies. What’s more, many budding film talents found their first work in these conditions, often working for the man who would be called “King of the B’s,” Roger Corman. This would continue on through the 60s and 70s as people like Peter Bogdanovich, Monte Hellman, Jack Nicholson, Allan Arkush, Joe Dante, James Cameron, Ron Howard and many more.
The 80s and 90s saw another boom in the B-Movie business with the arrival of the videocassette. Now, movies could be brought straight to video for the home market and still more prominent names appeared to produce these direct to video features. Even so, there were still lower budget pictures brought to the theatres and have earned massive cult followings, including Stuart Gordon’s “Re-Animator” and Joseph Ruben’s “The Stepfather.” Other prominent names to appear during this period include Charles Band’s Empire and Full Moon companies, Menahem Golan and Yoram Globus’ Cannon Films and two people who we are honoring at this year’s celebration, Fred Olen Ray and Albert Pyun.
This little history only scratches the surface of the vast history of theB-Movie’s influence and popularity. Some have said that the B-Movie is dead, but they’re wrong. Outlets like the SyFy channel regularly show lower budget pictures from people like B-Movie Celebration favorite Jim Wynorski and the Asylum company, which regularly produces well-received science fiction and fantasy items for the SyFy channel and for the DVD and Blu Ray market.
The B-Movie Celebration honors all those traditions from then to now. Here you’ll find late night TV perennials like Ib Melchoir’s “The Angry Red Planet” (1959) and the first in the series of popular films featuring “Francis, The Talking Mule.” You’ll get pioneering black efforts like the black vampire movie “Ganja and Hess” and Fred Williamson’s “Boss Nigger.” You’ll get underground films from John Waters (“Desperate Living”) and 80s classics like “Fright Night,” “Night of the Comet” and “Killer Klowns From Outer Space,” all of which feature significant creators on those films on hand to introduce the screening and talk about the film.  The Chiodo Brothers will all be at their respective screenings to chat with you about their work.
We are also looking toward the present and the future in B-Movie filmmaking with films not just from the , but around the world. We have films from (Rare Exports: A Christmas Tale, critically acclaimed by Roger Ebert and others), and , among many others. And we have several world premieres as well: Fred Olen Ray’s “Dino Wolf,” Albert Pyun’s “Tales from an Ancient Empire,” “Night Beast”  and still more, more, more.
Plus, we have a massive guest list roster this year, which means you get to talk to the filmmakers and learn from them. In addition to the Chiodos, there’s B-movie mavericks Fred Olen Ray and Albert Pyun, scream queen Debbie Rochon, drive-in movie critic Joe Bob Briggs, “Cashiers Du Cinemart publisher Mike White, Angry Filmmaker Kelly Baker, hosts Jim O’Rear and Bryan Wilson and still more. The B-Movie Celebration also offers many seminars with experts to talk about the art of screenwriting, directing and other aspects of the filmmaking process. So not only can you watch a lot of great movies, you can learn a whole lot, too.
And we can’t forget the Golden Cob Awards in which the cream of the crop of B-Movie talent is awarded and honored for their work. This, like every aspect of the B-Movie Celebration, continues to grow and expand every year with recipients of the awards present to take their slice of B-Movie glory.
That’s the B-Movie Celebration. 3 days of basking in the glow of killer B-movies and hanging out with many of the stars and filmmakers. There’s networking opportunities, lots of star gazing and loads of movies to see. We are proud once again to bring you an experience in B-Movies that we hope will enrapture you and enthrall you. So let the B-Movies begin and let a weekend of cinematic fun and excitement commence!

I’ve spoken with the treasurer here at TDOY Enterprises and inquired about the possibility of attending this event…and he probably wouldn’t be in a body cast right now had he not been laughing hysterically and unaware of that car racing toward him to run him over.  So I’ll be a no-show, but maybe some of our loyal Hoosier readers will make a pilgrimage and let us know how it went.  I hate to blog and run, but the ‘rents and I are going to wing our way over to the Double K Ranch this evening for a pre-birthday feast (fire up the grill, good people!) so I shall return to this space on the morrow.

For your old TDOY archives, you might also want to try the Wayback Machine (spelled that way for legal reasons, I'm assuming) -- archive.org. They're hit and miss, but can be useful at times.

Er, did I really suggest Skidoo? I should have known better. Then again, I'm about to embark on an evening of Arby's and Reb Brown movies, so maybe I don't know better at all.