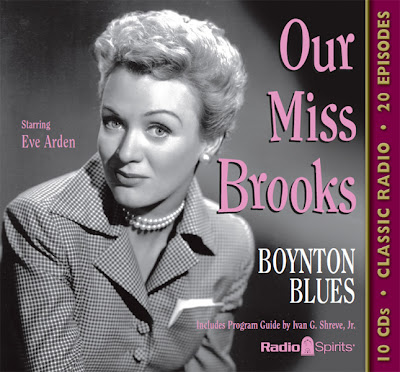 To the winners of both the Burns and Allen: Treasury and Sergeant Preston of the Yukon: Arctic Odyssey giveaways—I just wanted to let you know that I will have your free swag out to you by Saturday.  It’s been another one of those crazy busy weeks, but I have to stop by the post office eventually to check on my mail and to see what dastardly deed they’re concocting to make my existence a hell on Earth, so the packages containing your winnings will be making the trip as well. 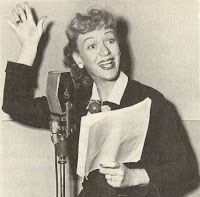 The policy here at Thrilling Days of Yesteryear is that if you’ve won one of the blog giveaways we’d like you to wait at least thirty days until you enter another…that way everybody out there in YesteryearLand gets the opportunity to take home free stuff.  Which allows me to segueway (smooth as glass, I tells ya) into the latest contest here at TDOY: a chance to win a 10-CD collection of Our Miss Brooks: Boynton Blues—the newest Radio Spirits set (valued at $39.98) containing twenty broadcasts of the popular sitcom heard over CBS Radio from 1948 to 1957 (and also making the boob tube transition in the fall of 1952 for a four-season run). 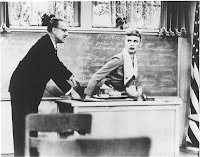 Many old-time radio buffs often argue that the comedy of that era doesn’t particularly date well (and anyone who’s ever listened to broadcasts starring TDOY idol Fred Allen will no doubt agree) but Our Miss Brooks holds up better than most because it’s primarily character-based comedy, with the topical jokes usually kept to a minimum.  Writing the notes for this set was pure unadulterated joy because the series is one of my favorites; the writing is sharp and funny, and the timing of the actors (Eve Arden, Jeff Chandler, Dick Crenna, etc.) is simply sublime.  People of my generation remember Gale Gordon as the irascible employer of Lucille Ball on such shows as The Lucy Show and Here’s Lucy, but I truly think Osgood Conklin is his finest portrayal, both on radio and TV.  There’s a moment at the end of one of the broadcasts on this set (“Game at Clay City,” ) where I was literally crying with laughter at his performance…and I have a sworn affidavit from my mother attesting to this. 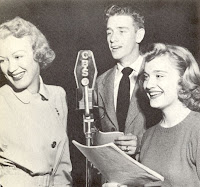 So if you’ve had a particularly trying day at the office and would like nothing better than to come home and chase those cubicle blues away by listening to some first-rate radio comedy, all you need to do is send me an e-mail with the subject header “Boynton Blues” to igsjrotr(at)gmail(dot)com before 11:59pm EST on Thursday, February 16.  Friday morning, I will select one winner (sorry I only have one of these to give away—I promised the other set to a friend) via the Amazing Random Number Generator at Random.org and will speed the prize to the lucky recipient ASAP.  As always, it will be a wonderful addition to your old-time radio library or, should you be feeling especially generous, a nifty gift for that OTR fan you know.  Thrilling Days of Yesteryear—where the winning tradition continues!
Posted by Ivan G Shreve Jr at 12:30 PM

Okay, so I can't enter, but I gotta say that I love Connie Brooks on radio and TV, too. When I was a kid, Eve Arden was my kind of woman. I suspect she's one big reason I became an English teacher, but I never met one like her during my career.

Oh Ivan, I remember OUR MISS BROOKS from early tv. It was such a hilarious show. Eve Arden, gosh, was there ever another one like her? Was there ever anyone to match her delivery? NOPE!

I love Gale Gordon too and Richard Crenna will always be the kid with a beanie whose way of saying Mr. Boynton always made me laugh. What a voice!

Can't remember if I've ever heard the radio version, but I'll send you an email and maybe I'll win the set.