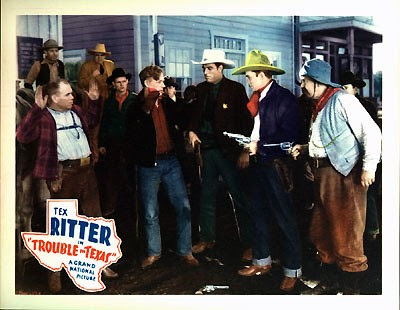 Last week when I introduced this feature, I got a nice reception from my Facebook compadre and fellow blogger Lloyd Fonvielle, who remarked that the title of the film I reviewed—Night Time in (1948)—had a special resonance for him in that is the location for his own little Rancho Mardecortesbaja.  So this week, I’ll serve this one up to the ’s own Bill “Texas leads the way” Crider with a 1937 oater starring Ritter…

Ritter?  Oh, well…that’s when I woke up.  And I’m sorry I did…because…

I dreamed I was there
In Hillbilly Heaven
Oh, what a beautiful sight

True story: I did this bit on the phone one day when my BFF The Duchess asked me if there was ever a famous person named Tex Ritter.  (Honest to my grandma, she did.  She doesn’t get out much.)  The response I got was…well, strikingly similar to one I’m getting right now…except not as many crickets. 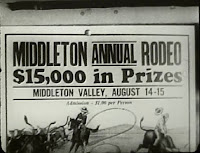 Okay, let’s get to work.  In Trouble in , plays Tex Masters, an amiable drifter and rodeo champion, which apparently is keeping him one step ahead of the vagrancy laws in each small town he passes through.  Accompanying him is the requisite comedy sidekick, Lucky (Horace Murphy), who suggests to Tex that they could make a more substantial living as entertainers (Tex sings and plays guitar, with Lucky on harmonica backup) but Tex’s interest in the rodeo stems from an incident in which his brother was murdered while competing and he’s sworn to catch up to the gang responsible. 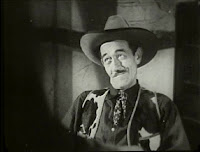 Fortunately for , he’s going to get an opportunity to settle that score.  A man named Barker (Earl Dwire) is directly responsible for ’s bro’s demise; he’s running a racket—assisted by henchmen Pinto (Charles King) and Squint (stuntman Yakima Canutt)—that conveniently “takes care” of any local talent entered in the events so that Squint can win the prize money.  Apparently the U.S. Government has also taken notice of this little rather egregious breach of good sportsmanship, because they send Carmen Serano (Rita Cansino), an undercover female agent, in to do a little nosing around in Barker’s operation.  Tex and Rita meet one another when Pinto and Squint try to rob the stagecoach she’s on, and while it’s plain to see that Tex is developing a thing for her this is, after all, a B-western…and we have to keep things chaste.

Tex starts kicking ass and taking names during the rodeo, winning all the events…so Barker has his goons attempt to dispose of our hero in the same fashion they did his brother—placing a poisoned needle in Tex’s halter.  But is on to them before they can succeed with their foul scheme, so the bad guys have to settle for a consolation prize…robbing the local bank.  This, too, will be futile because runs them down and rounds up the gang before ’ 63-minute running time is out.

Gene Autry may have been “’s favorite singing cowboy” but Tex Ritter was “’s most beloved cowboy”—and though I’ve only seen a small handful of the fifty-some oaters he appeared in during his lengthy movie career, I simply cannot disagree with that statement.  It’s impossible not to like the guy, even though he wasn’t particularly gifted in the thespic area—he projected an easy-going, natural presence onscreen that put him among the Top Ten Western stars for the years 1937-41 and 1944-45.  also enjoyed a successful singing career and fame as a performer on the Grand Ole Opry, scoring several #1 country smashes including I’m Wastin’ My Tears Over You (his biggest hit was probably Do Not Forsake Me, Oh My Darlin’—the ballad from High Noon).  , like “King of the Cowboys” Roy Rogers, also had a restaurant franchise at one time, Tex Ritter’s Chuck Wagons.

Ritter’s first feature film was Song of the Gringo (1936), which he made at Grand National—an independent studio remembered today mostly because at one time the company had James Cagney on the payroll after one of the actor’s frequent quarrels with Warner Brothers.   made a dozen westerns for the studio (produced by Edward F. Finney; Trouble in Texas was the fourth) before the company went belly up in 1939 but he found a job at Monogram afterward making oaters (he also appeared in several programmers for alongside Bill Elliott).  then co-starred with Johnny Mack Brown in a very entertaining series of westerns at Universal (I recorded some of these off of Encore Westerns, so they’ll probably turn up here eventually) and was allowed to fly solo when Brown left the series.  The Ritter westerns were quite popular but Universal let him go when they started to experience financial woes and Tex finished out his onscreen stardom at Poverty Row’s PRC (the initials joking referred to as “Pretty Rotten Crap” throughout the industry) with eight additional shoot-‘em-ups between 1944 and 1945.  He then took a break from movie work until 1950, with most of his roles afterward either in supporting parts or turns as himself. 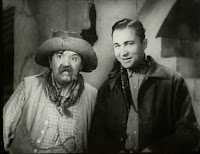 Trouble in Texas isn’t a bad Ritter vehicle but I’ll readily admit that it might be a trying experience for those people not generally inclined to enjoy B-westerns.  Part of this stems from the fact that there are rather long stretches in the movie that feature a lot of drowsy rodeo stock footage, recycled no doubt from the first time this appeared before the cameras in 1934 when John Wayne was The Man from Utah (one of the Duke’s “Lone Star” westerns, before he became JOHN WAYNE).  In fact, the “Murder Rodeo” plot was recycled again in Ritter’s Frontier Town (1938), then passed down to Bob Steele the following year in Mesquite Buckaroo (1939).  Steele went a-ridin’ and a-ropin with it again in 1944’s The Utah Kid (which co-starred Hoot Gibson) and after dusting it off one final time for the 1951 Whip Wilson programmer Lawless Cowboys, the big, bad rodeo was vanquished, never to be heard from again.

But Trouble in Texas had an enormous amount of staying power in theaters…and you don’t have to guess why this was so if you glanced at the plot synopsis a few paragraphs up.  A young professional dancer with aspirations of being an actress appeared in this film as an assignment between her leaving 20th Century-Fox and being hired by Columbia, where after undergoing electrolysis and a dye job she became Rita Hayworth.  In 1943, Ambassador Pictures re-released Trouble to theaters with this announcement: 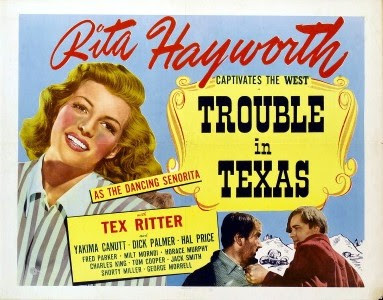 In fact, the print of this movie on the America’s Greatest Westerns box set gives Hayworth star billing, too (though the print also reveals the film was released by an outfit called Stagecraft Pictures): 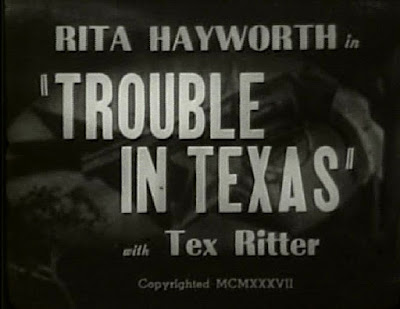 I like that “With Tex Ritter” bit there.  I can picture a moviegoer thinking “Have I seen this one before?  I could have sworn got top billing the first time around.”  Now, Trouble in Texas gives Rita the opportunity to show off her terpsichorean skills, and she’s positively mesmerizing during her Mexican dance number.  Her acting…well, not so much.  But I don’t think this is because she stinks, I’m convinced that she’s still learning her craft—because her naturalness (there’s no hiding it—she is exquisite) before the camera is a nice contrast with Ritter’s in the film (since he’s certainly no Olivier); the two of them exhibit a wonderful chemistry.  (There’s a scene where the two of them hit the dance floor together and both of them look as if they are really enjoying themselves.)

One of the more amusing bits in Trouble is that the extensive rodeo footage is intercut with shots of Rita looking on, and except for one brief scene where she claps in approval most of the time it looks as if they just used the same shots over and over again.  Observe:


I swear to you I did not use the same screen cap three times in succession, by the way.  Speaking of screen caps—this is the best one I could get of one of the other highlights in the movie: a nice little eccentric dance number performed by none other than character great Hank Worden, who was in more John Ford movies than Carter’s has little you-know-whats. 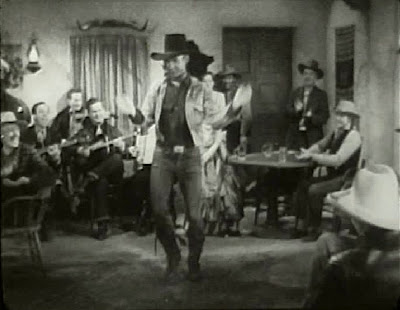 Oddly enough, I usually think musical numbers slow a movie down but in this particular instance Tex’s songs are a highlight (including Song of the Rodeo, which he wrote, and Al Bryan’s Down the Colorado Trail), backed by the Texas Tornadoes (Earl, Norman and Willie Phelps). 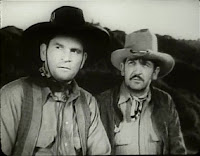 As for the supporting cast…well, Charles King can always bring on the villainy and while Yakima Canutt may not be the silver screen’s greatest actor he is definitely the King of the Stuntmen as far as I’m concerned—his work during the climactic wagon chase and some of the ridin’ ‘n’ ropin’ make up for the movie’s dull spots.  I think this is the first movie I’ve ever seen Horace Murphy in—I was familiar with him because he was on Roy Rogers’ radio program for a brief stint (he replaced “Gabby” Hayes as a garrulous old codger named “Clackety”)—but while I liked the byplay between him and Tex I have to come clean and say he’s no Gabby Hayes.  You might recognize the gentleman on the right… 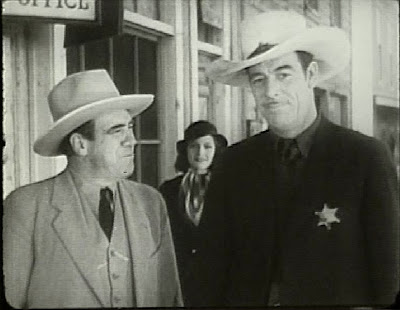 …as the guy who tended bar at the Long Branch for a good many years on TV—it’s future Frankenstein monster Glenn Strange who, strange as it may seem, is actually a good guy in this one.  But the one moment that made me laugh out loud is the scene just before the bad guys go racing for the border with the stolen bank swag; they’ve also made off with a wagon and the guy who owns it (George Morrell) is very upset: “Good glory!  And it’s loaded with dynamite!”  (You’d think the FDIC would cover that sort of situation.) 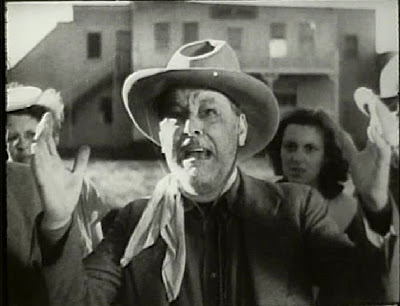 By the way, he wasn’t kidding about that cargo—take a look for yourself! 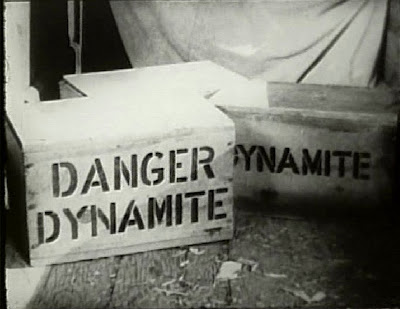 Well, “Stagecraft Pictures” might have hijacked the opening titles for Ms. Hayworth’s benefit but Trouble in Texas closes with one of my favorite motion picture studio logos—the sweeping hands of the Grand National clock that tell us that’s all for this week. 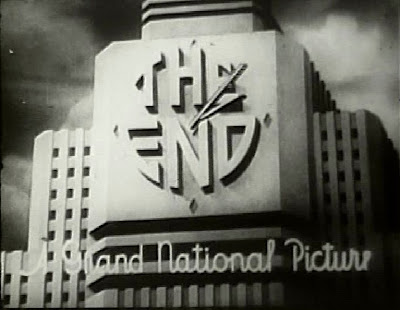