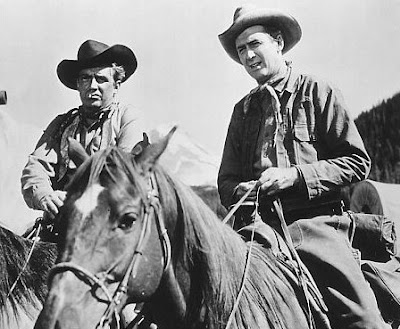 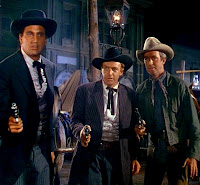 Sixty years ago today, Universal released Bend of the River (1952) to motion picture theaters—the second of eight film collaborations between director Anthony Mann and actor James Stewart, and the second of five westerns for which the two men would team up.  I stress this because my imperfect memory often wants to credit Mann and Stewart with only six films (the westerns and 1953’s ), when they also partnered on The Glenn Miller Story (1954) and Strategic Air Command (1955).  (You can just imagine how red-faced I was to learn this, and I even had to go back and correct this detail in an essay I wrote for Edward Copeland on Film…and More on ’73 back in 2010.)

Which brings me to the subject of the esteemed Mr. Copeland’s blog (smooth as glass), for it is there that you will find a paean to written by yours truly.  It’s no secret that I’m a huge fan of Winchester ’73 (my favorite of the Mann-Stewart oaters) but with each successive viewing of Bend of the River I find it to be an equally rewarding experience, often noticing details I didn’t catch the first time around.  Much of the credit should go to writer Borden Chase, whose screenplay (based on Bill Gulick’s novel Bend of the Snake) is a splendid mix of action and levity; TDOY fave Arthur Kennedy also co-stars with Jimmy in this one, demonstrating an amazing acting range (I’ve always admired how Kennedy could effortlessly shift from rat bastard to good Joe—this was also the year he played the hero in Rancho Notorious)…and there are first-rate contributions from character faves like Jay C. Flippen, Chubby Johnson, Frank Ferguson, Royal Dano, Harry Morgan and the evilest woman in the town of Mayberry, Francis “Aunt Bee” Bavier.  (I also always get tickled when I hear the unmistakable voice of announcer Howard Petrie, whose radio work includes working the shows of Jimmy Durante and Judy Canova, as ’s villain.)
So you can mosey on over to Mr. C’s and read my tribute when you get a free minute or two…and I also cannot recommend highly enough this piece by my pal Laura of Miscellaneous Musings, who got the opportunity to see Bend of the River on the big screen back in October of 2011, the way Nature intended.  (And as promised, I will be bringing the blog back to full steam once Valentine’s Day has come and gone.)
Posted by Ivan G Shreve Jr at 1:00 PM

Two great flicks. I remember seeing Winchester '73 for the first time & realizing "Hey, this is a really good movie."

Never see Bend of the River, but I am a fan of Winchester '73.

My favorite Stewart/Mann collaboration is probably The Naked Spur, but Bend of the River is a close second. This is gonna sound like sacrilege but my favorite Mann Western isn't even a Stewart picture; it's The Tin Star. Of course, I'm a huge Henry Fonda fan.

Thanks so much for the link! I really enjoyed your essay on this movie. It's such an entertaining movie!

I reviewed BEND IN THE RIVER not long ago at my blog and, like you, find it a very good western; Mann could get a toughness out of Stewart that is counter to his usual amiable presence on screen. And you are right about Kennedy; I rarely enjoy watching him on screen, but sometimes he has a likable side that makes you want to forget the rest. He plays a similar role in THE MAN FROM LARAMIE, which is my favorite of Mann's westerns with Stewart.