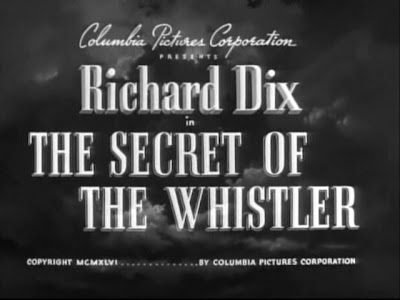 Over at the Radio Spirits blog, I’ve posted yet another review of a film in Columbia’s Whistler series—this one being the sixth in the studio’s successful franchise (based on the popular radio program heard over CBS Radio on the West Coast), The Secret of the Whistler (1946).  Once again, Richard Dix takes center stage as an artist who has no aptitude for painting, getting by instead on his invalid wife’s (Mary Currier) fortune.  When Currier discovers that Dix has been having an assignation behind her back, she vows to cut him off without a penny…and so Mr. D must resort to a somewhat sinister scheme in order to continue collecting a payday. 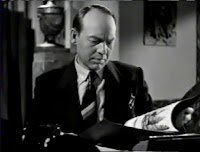 I didn’t see anyone in this film that might be recognizable in any of the chapter plays featured on Serial Saturdays—unless you want to count Byron Foulger, who’s in the cast of The Mysterious Mr. M, the last of Universal’s serials and one I’m giving serious consideration to tacking when I finish with the hi-jinks of Adventures of Sir Galahad.  Foulger also had a bit part in a previous Whistler outing, Voice of the Whistler; in Secret he has an amusing role as a mortuary proprietor who takes down an order for a tombstone from doomed wife Currier.  It is interesting to note that Arthur Space, who was in last week’s Whistler movie, Mysterious Intruder (as Regis “I can never die” Toomey’s henchman), gets a bigger role in this week’s entry… 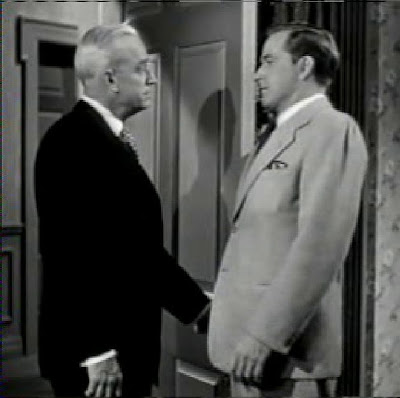 …as a specialist who’s responsible for getting Currier back in the pink.  Also in Secret is this man… 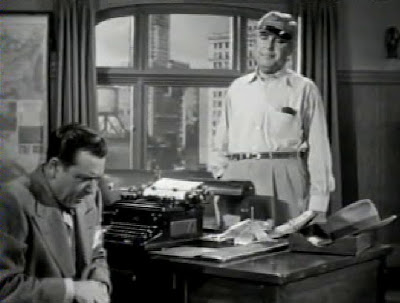 …yes, that’s John “Great Caesar’s Ghost” on the right (with Ray Walker on the left); he plays—here’s a stretch—’s editor on the paper, who gives him a scoop that allows Ray to cross paths with the aforementioned Foulger. 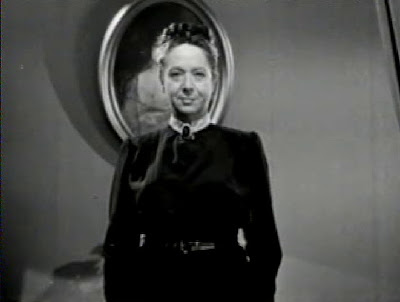 One more thespian that I will single out from Secret is Claire Du Brey, who plays Currier’s loyal housekeeper…when I first saw her in this movie that line of Binnie Barnes’ from the A&C movie The Time of Their Lives jumped into my head: “Didn’t I see you in Rebecca?”  Du Brey had a very prolific career during the silent era, but also made many talkies with small but pivotal roles in such films as The Sin of Nora Moran and Jesse James.  The Greatest Cable Channel Known to Mankind™ will be running The Secret of the Whistler this Saturday (September 29) at , so if you haven’t seen it I highly recommend it—it’s a doozy, as Shirley Booth used to say.

In classic movie news, the august body of bloggers who make up the Classic Movie Blog Association are currently deciding who will take home a coveted CiMBA trophy this time around.  The CiMBA Awards are always a star-studded gala affair, but I have been told that I will not be presenting any awards due to my refusal to abandon the idea of conversing on stage with a futon representing Paul Ryan.  If you’re curious as to who and what has been nominated, the CMBA blog has the list here—I made sure I voted early this time around, so if anyone was planning on sending me a large bribe-like gratuity…you’re too late.

On the subject of the CMBA, the founders of that organization e-mailed me this weekend to invite Thrilling Days of Yesteryear as a member of the Classic Television Blog Association…which is a little more laid back than the CMBA, with no board of governors or anything like that…its purpose is merely to provide a community of those bloggers who enjoy classic TV.  (“A member only has to post an average of 12 classic TV-related posts per year,” the e-mail stated…and I think I have that covered with our weekly excursions to ’s favorite small town each Monday.)  At last check, there were two other members in the group: The Classic Film and TV Café and How Sweet It Was—but maybe by the end of this week we’ll have enough people to start our own intramural basketball team.  (Details on becoming a member are available here.)

So with the mention of classic TV…naturally that means a quick roundup of some of the vintage goodies headed our way on DVD soon, courtesy of TVShowsonDVD.com.  And there are going to be some goodies, my friends.  MPI Home Video has announced that the fifth season of family sitcom favorite The Donna Reed Show is headed our way December 4th with a 5-disc collection (priced at $39.98 SRP) containing all thirty-four episodes from that year.  Those of you fortunate to get Me-TV in your viewing area (whether it be digital antenna or on cable) are probably aware that the hardy domcom is also part of that channel’s weekday lineup, airing at   But the great thing about the Donna Reed Show collections is that if you do a little ‘Net sleuthing (or even wait a bit after their release) you can pick them up for practically pocket change (and I speak as a person who has nothing but). 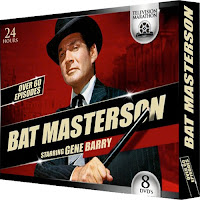 One of the newest members in the classic TV-on-DVD fraternity is TGG Direct, and their bid to continue that status will be solidified with two releases coming October 23rd.  The first is an 8-disc collection entitled Bat Masterson – 24 Hour Marathon, which will retail at $29.96 SRP and contain close to sixty episodes of the 1958-61 western series starring Gene Barry.  The company has already dabbled in a little “Batness” by releasing a couple of earlier discs—The Best of Season 1 and The Best of Season 2, both two-disc releases—so I’m guessing the Marathon collection will duplicate those two earlier releases while including additional installments.  (I have the complete run of the show, obtained from a reliable bootlegger, but I’d definitely be up for a purchase if the quality is better). 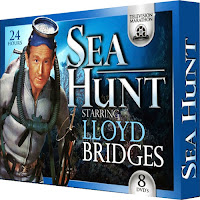 The other October 23 release from TGG Direct will be Sea Hunt – 24 Hour Marathon, an 8-disc collection (also priced at $29.96 SRP, though the number of episodes aren’t indicated on the package like the Masterson set) of shows from the 1958-61 syndicated adventure series featuring Lloyd Bridges underwater.  I have stuck this one on the ol’ Amazon wish list as well, and I’m sure my fellow Sydney Greenstreet impersonator and Jaw-Ja blogger Elisson will want to check this out in case he’s planning on reorganizing The Royal Huntation Society. 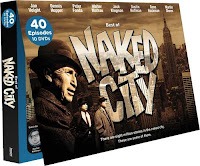 Finally, I was really excited when I got an e-mail the other day announcing that there was a Naked City collection coming out on January 8, 2013—a 10-disc collection ($29.98 SRP) with forty episodes, because that’s about how many of the hour-long episodes (I think it’s actually 39) from the crime drama’s 1960-63 season that have not yet made it to disc.  Sadly, I was doomed to disappointment; the episodes on The Best of Naked City are all those that were issued between 2003 and 2008 on Image Entertainment’s single and multi-disc collections.  The good news is that because those collections have been discontinued (OOP), this is a great chance for collectors to get these shows…and if you’ve never been introduced to the pleasures of one of TV’s all-time best dramatic anthologies, it’ll give you an opportunity to start.  (I have been loving every minute of the series as it is rerun on Me-TV Sunday nights at 1am…even if I do risk waking up grumpy from lack of sleep the next morning).  Maybe, he said with fingers crossed, Madacy Home Video will eventually release the missing eight million stories of the show, both the hour-long episodes and the first season’s thirty-nine half-hour installments.
Posted by Ivan G Shreve Jr at 7:00 PM

It might be of interest to you that John Hamilton didn't always play newspaper men. He plays a doomed chemical company executive in the first of Boris Karloff's Mr. Wong movies. I have a review over at Land of Whatever.

Ivan, what I always enjoyed about THE WHISTLER films was the anthology format with no recurring characters (kinda like the Inner Sanctum series). Both series capitalized on their flexibility with some interesting entries. As for the Classic TV Blog Association, I'm thrilled that you joined. With only three of us so far, we can still play in a 3 on 3 basketball tournament--just don't expect me to the point guard (I'm all about scoring--no stinkin' passes to others).

Naked City is going on my Christmas list for sure, thanks to those Me-TV showings.

It might be of interest to you that John Hamilton didn't always play newspaper men. He plays a doomed chemical company executive in the first of Boris Karloff's Mr. Wong movies. I have a review over at Land of Whatever.

I've seen that movie -- in fact, I reviewed it once over at the former Salon blog before it was blown to smithereenies. And I've caught Hamilton in a lot of the Crime Does Not Pay shorts, too.

I'm really looking forward to getting copies of the Sea Hunt and Bat Masterson collections. The This TV affiliate that used to air both programs switched over to PBS programming a couple of years ago, and I miss watching that stuff in the mornings.

Rick29 rapped the podium for attention:

Ivan, what I always enjoyed about THE WHISTLER films was the anthology format with no recurring characters (kinda like the Inner Sanctum series). Both series capitalized on their flexibility with some interesting entries.

I was predisposed to like the Whistler films mostly because I was a huge fan of the radio show -- a program that didn't need the big celebrity star wattage of Suspense to do first-rate drama. But then again, I've always been a sucker for those old series films: Boston Blackie, Crime Doctor, The Lone Wolf, etc.

Naked City is going on my Christmas list for sure, thanks to those Me-TV showings.

I was a little blue when I learned that the collection consisted of the shows I already have -- but it's a splendid bargain for those who didn't collect the series the first time around. I remember reading a TV Guide article many years ago that conducted an informal poll of policemen and a majority of them said Naked City was the best cop show that ever aired. Having seen a bunch of them, I can see why they made that call.

Later on, another top vote getter for "most realistic" among policemen was Barney Miller. Common themes: lots of coffee and paperwork.

Had he been a urologist instead of an actor, he could've billed himself as Dick Dix, the Dick Doc. But... no.

As for Sea Hunt, that boxed DVD collection could help the Society fill in its archive of classic Sea Hunt quotes ("It was my two arms against his eight!") as well as helping us determine, once and for all, exactly how many times Bridges would say "Huh" in any given 'sode. I can't wait!