Before I start I wanted to remind the Thrilling Days of Yesteryear faithful that the Henry Morgan/Mutual Radio Theater giveaway deadline is this evening at   If you’d like to be entered for a chance to win two, count ‘em, two Radio Spirits collections—one with episodes of The Henry Morgan Show, the other containing broadcasts from The Mutual Radio Theater—shoot me an e-mail at igsjrotr(at)gmail(dot)com with “Mutual’s Henry Morgan” in the subject header.  You’re under no obligation to buy…and no salesman will call.  (You just need to be a or Canadian resident, and have not won anything on the blog within the last thirty days.)  Tomorrow morning, I will choose a winner and get their prizes out to them with all deliberate speed.  (Because that’s the way I roll.) 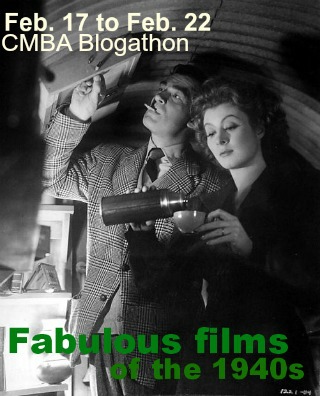 I also wanted to check off a couple of blogathon announcements, beginning with the Classic Movie Blog Association’s first of two events that will take place this year.  From February 17-22, that august gathering of classic movie bloggers will offer up their takes on “Films of the Fabulous 40s”…and TDOY has already RSVP’d, choosing Foreign Correspondent as its entry.  The description on the post reads: “Full of feel good comedies, eye opening war movies and post war film noir angst.”  (So I clearly qualify.) 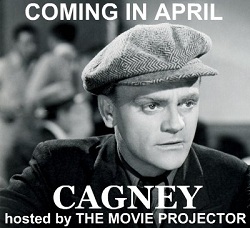 My fellow CMBA compadre R.D. Finch at The Movie Projector has also put the foundation up for a blogathon saluting Academy Award-winning actor James Cagney in April.  The rest of the house still has to go up but I figured that since he already placed the above banner on his site it wouldn’t hurt to give him a plug.

With that out of the way, TV western fans are positively going to plotz over the news that this April 23rd… 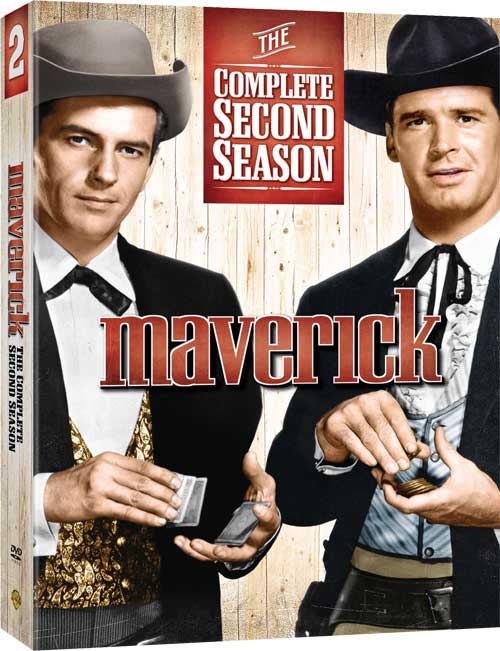 …yes, Season 2 of the classic series Maverick will be released on that date—I’ve referenced this in the comments section of an earlier post and made mention of it on Facebook and Twitter but felt it only proper that it be given a formal acknowledgment (at least put the nice box set art up).  All twenty-six episodes from the show’s sophomore season will be made available in a six-disc set that will sell for $39.98 SRP, and reports that my good friend Laura from Miscellaneous Musings was dancing in the streets with wild abandon at this news could not be substantiated at press time.

This week’s “I-can’t-believe-this-is-coming-to-DVD’ entry involves a pair of TV westerns.  The first, mentioned at TVShowsOnDVD.com, is Tombstone Territory, a half-hour oater produced by Ziv Television (who also brought you classics like Sea Hunt and Bat Masterson) that had a short network run from 1957-59 on ABC, and then finished out its remaining year as a syndicated offering, which was kind of par for the course for the Ziv people.  The show starred Pat Conway as Clay Hollister, sheriff of the town that was “too tough to tame”; Richard Eastharn co-starred as Harris Claibourn, the Epitaph’s crusading editor.  I can’t ever remember seeing this one on any kind of cable outlet in the last twenty or so years, but on April 2 you’ll be able to score a 4-disc collection of the series’ first season (thirty-nine episodes) for $29.93 courtesy of Shout! Factory/Timeless Media Video.  (I’ll be keeping an eye out for this one.) 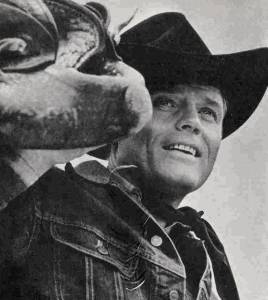 TSOD doesn’t have an announcement up for this yet—it popped up at Amazon when I was revising my wishlist—but Timeless Factory also has plans to release the short-lived Western Stoney Burke (1962-63) to DVD in a six-disc collection on April 16th (the SRP on this one is $39.97).  Stoney was the second rodeo western series to debut in the fall of 1962 (the other was Wide Country, which is also available from Timeless) and starred Jack Lord, before he started rounding up psychopaths in the .  It lasted just one season (thirty-two episodes) but many of the individuals who later went on to do The Outer Limits were employed on the show, notably writer-director-producer Leslie Stevens.  (The program also featured occasional appearances from character faves Warren Oates and Bruce Dern.)  I’ve only seen one episode from this show, “Point of Entry” (03/04/63), which surfaced on a collection of PD oaters a good many years back…but I enjoyed the heck out of it, and am anxious to see some more.  This is another I’ll be watching out for.

You might find this difficult to believe—but there is a goodly considerable amount of folks out there who have no interest in collecting all of the episodes of a classic TV series…they’re merely content with a sampling or “best of” collection.  At least that’s what the companies who put these programs on disc believe, because Timeless Factory will make three collections available for “casual fans” available on April 9th: Adam-12: Classic Collection, Route 66: Classic Collection and Leave it to Beaver: 20 Classic Episodes.  This last one is a reissue, as is Howdy,Kids!: A Saturday Afternoon Western Roundup—also due out on the same date (though this one has had a little plastic surgery—it was originally released as Hiya, Kids!: A 50s Saturday Morning back in 2008).  The Adam-12, Route 66 and Leave it to Beaver sets are all priced at $11.97 SRP; Howdy, Kids will retail for $24.97.

Finally, in the cold-cereal-and-footy-pajamas department—the Warner Archive released Butch Cassidy and the Sundance Kids: The Complete Series to MOD (manufactured on demand) DVD last Tuesday (January 15)—all thirteen episodes of the Hanna-Barbera-produced cartoon show that bounced around Saturday mornings for a short time beginning in the fall of 1973.  Despite the title, it was not a western—Butch was the lead singer of a teen rock group that also moonlighted as a spy (gloriosky!)…and truth be told, I don’t remember too much about this one except that they had a comical dog named Elvis (voiced by…oh, here’s a surprise—Frank Welker!) and that it provided work for OTR veterans like Hans Conried, Henry Corden, Virginia Gregg and John Stephenson.  Mickey Dolenz of the Monkees also collected a paycheck for this show, as did Room 222 regular and future Dyna Girl Judy Strangis.  (If you’re up for it—go forth and wallow in nostalgia.)
Posted by Ivan G Shreve Jr at 2:30 PM

LOL!! Glad you gave MAVERICK the great publicity here, hope it sells great and all the other seasons come out too!!

Now if Warner Bros. or the Archive would put out LAWMAN too... :)

In re.: Butch Cassidy: Elvis' main characteristic was that he made the computer----get this---sneeze. Go figure that one out.