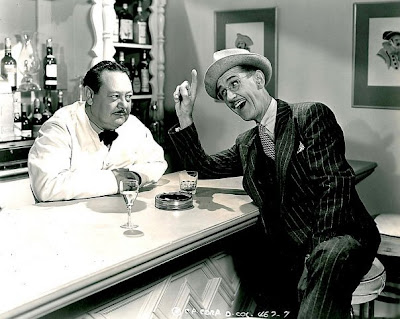 As I promised myself back in December, I finally got around to purchasing two different sets of Charley Chase shorts that I had been coveting (yes, I have been known to covet on occasion) for quite some time now.  The first of these was Cut to the Chase, a two-disc collection released by Milestone back in November of 2011 containing sixteen one- and two-reel comedies from the comedian whose life Robert Youngson so succinctly described as “one long embarrassing moment.”  The Milestone release has been a long time coming—it was announced as far back as 2005…but all things come to those who wait.

Several of the shorts in this collection have been released in other sets by other companies, notably VCI’s excellent Becoming Charley Chase (which I reviewed here) and the Kino-Lorber Charley Chase collections, Volumes 1 and 2.  Truth be told, there was really only two shorts on this set that I had not previously seen…one of them that I conveniently swiped for the title of this post, a 1926 short supplied courtesy from the John Hampton Collection of the Stanford Theater Foundation.

In Charley My Boy!, Mr. Chase is a newly-hired clerk whose boss (Walter James) wants his daughter (Katherine Grant) to marry an old coot (William Courtright) also named “Charley.”  A mix-up occurs when Chase receives a dinner invite meant for Coot Charley…and to make things more interesting, a co-worker (Sidney D’Albrook) has slipped our hero several sleeping pills into his glass of milk.  It’s a very funny entry in Charley’s silent oeuvre, directed by Leo McCarey with gags by Stan Laurel—my favorite bit has Charley trying to hide from a nosy cop (Fred Kelsey) the fact that Grant’s car is parked near a fire hydrant; Kelsey turns up in quite a few of Chase’s silent comedies (Dog Shy, Crazy Like a Fox) and also worked alongside him in shorts produced at both Hal Roach and Columbia as well.

The other short I had not previously viewed (save for a short clip in Robert Youngson’s 4 Clowns) is What Price Goofy? (1925)—which finds Charley saddled with more than just an unwanted dog…he’s got a wife (Grant again) who’s convinced he’s being unfaithful.  She runs home to Mama, but arrives back in time to find Charley entertaining a visiting professor (Marjorie Whiteis)…who also happens to be female.  A renowned film critic over at the IMDb claims this film has no laughs…but I defy anyone not to guffaw at the sequence where Chase and Whiteis “share” the same bathroom without either being aware of the other’s presence.  It’s nice to see this comedy on a Region 1 release—its previous availability was limited to a Region 2 collection from Lobster Films entitled Charley Chase – Retour de Flamme.

A few other comedies in this set—The Uneasy Three (1925) and Mama Behave (1926)—have made the rounds of The Greatest Cable Channel Known to Mankind™ from time to time, but it’s beneficial to have copies that don’t rely on whether or not the weather was right or if my cable was wonky that day.  There’s also a print of Bad Boy (1925) that’s slightly different from the one on Becoming Charley Chase, which I noticed when I saw it, too, on TCM.  So while there is some duplication (which a person goes into a little more detail at the listing for the set on Amazon.com) I didn’t mind shelling out a little money for shorts I didn’t already own…and anything I can do to further future releases of this sort is always jake with me.

The other Chase set was released at the beginning of the new year in 2013—a MOD collection from Sony Home Entertainment entitled Charley Chase Shorts, Volume 1.  (They must be mad that Milestone came up with the more creative title first).  This collection contains nine shorts originally produced at between 1937 and 1940 (Chase passed away in this last year, acute alcoholism taking its toll at the age of 46), eight of which feature Charley and one that he directed (though he does have a voice cameo).  The set contains several shorts considered by his fans to be classics, including Rattling Romeo (1939) and The Heckler (1940), and some that aren’t necessarily as warmly embraced, like Man Bites Lovebug (1937) and The Mind Needer (1938).  (I think these two shorts are among the weakest in Charley’s catalog; Ed Watz, co-author of the invaluable reference work The Columbia Comedy Shorts, respectably disagrees.)

But the great thing about this set is that it contains three shorts I had not had the privilege of seeing, beginning with The Chump Takes a Bump (1939).  Charley’s boss (Del Henderson) wants to play footsie with a woman (Ruth Skinner) who is not Mrs. Charley’s boss, but a client (Harry C. Bradley) is most disapproving of this arrangement so the boss dragoons Charley into coming along with them to a nightclub, whereas our hero will act as a decoy.  So how does this arrangement suit Mrs. Minnie Chase (Ann Doran), you may be asking?  Well, it does not—she finds out about her “philandering” hubby and goes down to the club to confront him.

In a scenario right out of Chase’s silent classic Mighty Like a Moose, Charley fails to recognize his wife because she’s just bleached her hair blonde…and as you’ve probably guessed, he starts flirting with her and then asks her to do the town with him.  Eventually the two of them wind back up at the house, with Doran having to race back from room to room to continue the masquerade that she’s two different women…which eventually falls flat, or otherwise Charley would be committed by the end of the film.  This plot was recycled a few years later in a short that Hugh Herbert did for the same studio entitled Wife Decoy (1945)—and while some people consider it one of Hughie’s best efforts for the studio (I can’t say I’m a fan of Herbert’s, given that most of his two-reelers are difficult to tell apart) I think Charley did it right the first time.

Ann Doran, a longtime TDOY fave, worked alongside Charley in a number of his comedies and to be downright honest: he never had a better leading lady during his stay at that studio.  She shines as Mrs. C in another hilarious outing—maybe the best of the shorts I hadn’t already seen—entitled South of the Boudoir (1940), which finds Charley once again having to entertain his boss…but he’s ticked Ann off and is forced to enlist a gum-chewing waitress (Helen Lynd) to be Ann because she’s gone out and met the boss—who has fallen in love with her and invited her back to her own home to be his guest at dinner.  Cartoon fans will be amused by the fact that Arthur Q. Bryan—The Man Who Would Be Fudd—plays Charley’s employer, and even slips into a little Fudd-ese in a scene where he baby-talks Doran.  The highlight of this short is an argument between Chase and Doran in their kitchen that escalates into a riotous dish-smashing melee. 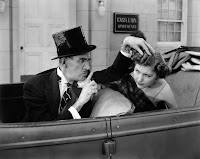 The last of the unseen shorts in the Volume 1 set is The Awful Goof (1939)…and technically it isn’t entirely honest of me to say I hadn’t seen it—it’s just the version I saw featured Shemp Howard.  Yes, Goof was remade by the Shempster as Bride and Gloom (1947) and while Shemp’s version is certainly amusing I think Charley’s a tad better.  Once again, Charley borrows from his earlier films (the first part of this is cribbed from Limousine Love) and creates an amusing comedy of marital errors in which he runs afoul of a boxer who thinks Charley is cheating with his wife.  (Hey—when the woman winds up in the back of your car without a stitch of clothing on…what else are you to think?)

During his days, Charley Chase also directed a few comedy two-reelers (though none of his starring efforts), notably two of the Three Stooges’ best efforts, Tassels in the Air (1938) and Violent is the Word for Curly (1938).  The ninth short on the set is one of Chase’s behind-the-camera exercises, a 1939 comedy entitled A Nag in the Bag featuring the vaudeville team of Joe Smith and Charlie Dale.  I’ve read some mixed reactions to this short, in which Joe and Charlie play a pair of drive-in owners with a predilection for playing the ponies: some like it, some do not.  I didn’t have a problem with Nag (I thought it was amusing in a good many places—including a nice bit where Joe and Charlie get trapped in a phone booth with Bud Jamison) but I have to admit I don’t know what Columbia was trying to accomplish with the team because they definitely did not mesh with the rough-and-tumble slapstick that was the studio’s trademark (they made an additional short in Mutiny on the Body, also directed by Charley, and then Columbia got along fine without their services).  Greg Hilbrich of The Shorts Department says that department head Jules White didn’t care for Smith and Dale’s humor, so that probably explains why they left in a hurry without their hats. 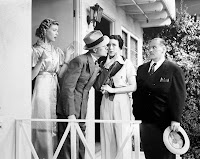 I posited earlier in an essay on the Shemp Howard shorts that were released by Sony last year that oftentimes watching a superior print of these comedies can change one’s opinion of them—and I definitely feel this is the case with this Charley Chase collection; I’m starting to see why so many people are fond of Rattling Romeo even though my previous reaction was kind of mixed.  I’m sad to report that I’ve heard conflicting stories on whether or not the studio plans to release any more of these comedies (the best argument I’ve heard “for” is that it doesn’t make sense to title something “Volume 1” if “Volume 2” is planned afterward) so my advice to you is if you’re a Charley Chase fan, you definitely don’t want this to get away.  (Well, actually…both of them.)
Posted by Ivan G Shreve Jr at 9:00 PM