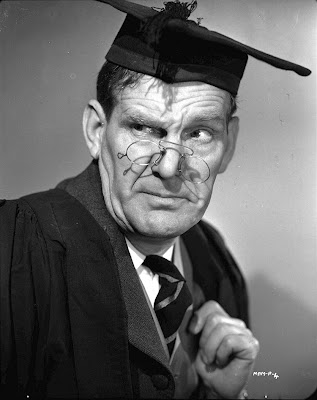 Last Tuesday here on the blog, I offered up a review of a brand new VCI Entertainment DVD release of British film comedian Norman Wisdom’s first two starring feature films for the Rank Organization.  Released in tandem with the Wisdom movies was another disc containing two features that star one the UK’s best-loved cinematic mirthmakers, who galvanized audiences from 1934 to 1943 with a string of popular vehicles that usually (but not always) featured him as a scowling schoolteacher, futilely trying to keep his young charges in line.  The character of headmaster was quite familiar to William “Will” Thompson Hay, who had played the charade as an established music hall performer, a profession he embraced at the age of 21 (he had originally planned a career in engineering) after watching W.C. Fields juggle in a performance at a London theater.

The influence of Fields is particularly appropriate in the case of Will Hay, because while it’s not always entirely fair to compare one comedian to another, Hay’s cinematic persona closely resembles The Great Man—a misanthrope who’d just as soon be left alone to pursue his vices of strong drink and a good smoke.  Hay, however, possessed a tad more warmth than the Fields character, but shared the same characteristic of masquerading a thin veneer of respectability (in playing authority figures) to cover up an obvious incompetence.  Hay, who received a writers’ credit on several of his films in the same manner as Fields (though Fields had a bit more imagination on his signatures, using pseudonyms like “Mahatma Kane Jeeves” and “Otis Criblecoblis”), was really the “auteur” of his many movies, having finely honed his character all those years on stage.  Interestingly, the infamous William “One-Shot” Beaudine directed (if you can call it that) both men—Fields in The (1934) and Hay in four films, including the two that I’ll talk about in this post. 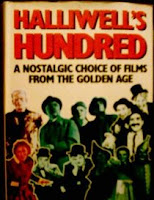 I had sort of an unusual introduction to Will Hay.  I read about the man in a book by film critic Leslie Halliwell called Halliwell’s Hundred, a list of movies that Halliwell considered among his favorites.  One of the entries in the book is on Hay’s cinematic swan song, My Learned Friend (1943)—a movie that I have wanted to see for many years but have still not had the pleasure.  The one Hay film that I have seen, Oh, Mr. Porter! (1937), is considered by a great many of Will’s fans to be his best (and even Hay counted it among his favorites).  I saw it several years ago after reading that the characters played by Hay and his co-stars Graham Moffat and Moore Marriott (“The next train’s gone!”) were Jimmy Perry’s inspiration for Captain Mainwaring (Arthur Lowe), Private Pike (Ian Lavender) and Lance Corporal Jones (Clive Dunn) on Dad’s Army, my favorite Britcom of all time.  (There’s an additional connection to Army in that the screenplay for Porter was loosely based on the British stage chestnut The Ghost Train—written by Arnold Ridley, who played Army’s incontinent Private Godfrey.)

VCI’s Will Hay Double Feature Volume 1 spotlights the first two films the comedian made for Gainsborough Pictures—though he had previously appeared in three features for Elstree/British International, Those Were the Days and Radio Parade of 1935 in 1934, and Dandy Dick the following year.  In Boys Will Be Boys (1935), Hay portrays Dr. Alec Smart—a professor who applies for the position of headmaster at a school called Narkover.  Narkover is not without its unsavory reputation; many consider it a breeding ground for career criminals…and in fact, when Hay’s Smart asks the governor (Percy Marsh) of a prison at which he teaches part-time for a recommendation the official muses that since one of their newest “guests” is the former headmaster of Narkover it would be only fitting to send them Smart as “one goes in, one goes out” gesture.  However, the governor is convinced that Alec would indeed be a poor candidate for the position…but with the help of ex-convict Faker Brown (Gordon Harker), who substitutes a forged recommendation letter from the gov, Smart is soon chosen to head up Narkover. 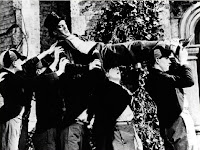 Upon arriving at his new post, Smart is soon blackmailed by Faker into hiring him to work at Narkover…because Faker has his eye on some valuable jewelry that’s the property of Lady Dorking (Norma Varden), one of Narkover’s major donors and the Margaret Dumont of the film.  Alec also has his hands full with the rowdy contingent of students at Narkover, who are egged on by the academy’s “head boy” Cyril Brown (Jimmy Hanley)—and while it would usually be customary to stress there’s no relation to Faker, in this case that would not be accurate: Faker and Cyril are pere et fils.  Smart has also managed to get on the bad side of cantankerous Colonel Crableigh (Davy Burnaby), who had hopes of promoting his dense nephew Theo P. Finch (Claude Dampier) to Alec’s job.

As predicted, Lady Dorking’s jewels are eventually stolen and are passed around among several of the film’s characters before finding their way into a rugby ball that’s used in a game between the current students and Narkover grads.  A wild and wooly melee during the match occurs as the scrambled to recover the gems ensues, but Smart manages to foil the crooks by kicking the ball towards several policeman and ensuring the rounding up of the usual suspects. 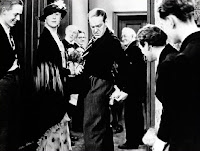 Boys Will Be Boys was Will Hay’s breakthrough film and the first to feature his bumbling schoolmaster characterization—which he would repeat in subsequent movies like Good Morning, Boys (1937) and Convict 99 (1938).  It’s a very entertaining film and a grand introduction to the comedian, with a rib-tickling screenplay courtesy of Hay and Robert Edmunds…loosely based on the Narkover stories by Beachcomber (the pen name of writer J.B. Norton, who is also credited with contributing special material to the film).  The Narkover school in the film is kind of a lampoon of the rigid British school system (with its students possessing skills that will ensure they “never steal anything small”) and putting Hay’s character in charge as headmaster provides some priceless comedic moments—my favorite is Smart’s first day on the job, where his young charges slowly ease him into a card game. 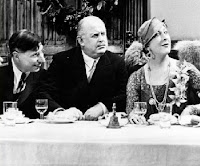 Dad’s Army’s Clive Dunn has a tiny part in this film (as does Carry On alumnus Charles Hawtrey) but to be honest I couldn’t locate him on a first viewing; the only individual outside of Hay with whose work I was familiar was character thesp Norma Varden (as Lady Dorking), whom you’ll recognize from Casablanca (1942) and Strangers on a Train (1951—as the dame Robert Walker’s Bruno tries to strangle at the party) as well as helpless wealthy neighbor Harriet Johnson on TV’s Hazel.  Varden is also on hand in the second Hay feature, Where There’s a Will (1936)—this one features the comedian as incompetent solicitor Benjamin Stubbins.

Stubbins’ law practice is on the brink of collapse but despite his financial woes he still manages to put on the best possible face for his daughter Barbara (Peggy Simpson), who is in the care of Stubbins’ in-laws Lady Margaret (Varden) and Sir Roger Wimpleton (H.F. Maltby).  A fellow boarder (Hal Waters) at Stubbins’ rooming house helps him out of a predicament with his landlady (Sybil Brooke), so to return the favor he agrees to help out a friend of the boarder’s named Duke Wilson (Hartley Power).

The American Wilson wants Stubbins to research the family background of his moll Goldie (Gina Malo), claiming she comes from an old Scottish family…but despite the pretense Duke puts on that he’s a respectable businessman, he’s really a two-bit hood looking to rob a bank with his henchman Slug (Eddie Houghton) and Stubbins’ friend, who answers to “Nick.”  Duke wants to use Stubbins’ office as a point of entry (it’s right above the bank he plans to rob) to get into the bank, and though Benjamin is briefly distracted by entertaining Lady Margaret and Barbara in Wilson’s apartment (which he’s passing off as his own) he soon stumbles in on his new friends in mid-rob.  Stubbins’ fingerprints end up on the bank safe (he didn’t take the precautions his comrades did and wear gloves) and he fears being eventually picked up by the law. 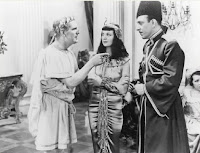 But the film winds up with a merry Christmas costume party (add this to another list of holiday-themed films, by the way) in the House of Wimpleton that Duke and Goldie have crashed (with Nick and Slug masquerading as the help); Stubbins shows up as well, and with the help of the family butler (Gibb McLaughlin) manages to round up the thieves and deposit them in the hands of the constabulary.  (Stubbins’ plan involves donning the guise of “Father Christmas” and taking a tumble down the chimney in true Santa fashion.) 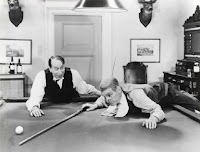 Both Boys and Will are entertaining comedies—to be honest, I prefer the tone of Hay’s pricklier, slightly abrasive vehicles to that of Norman Wisdom’s cheerier flicks even though I enjoy watching both—but I’d probably give a slight edge to Where There’s a Will only because it seems to contain funnier set pieces.  One of the highlights is a billiards game between Hay’s Stubbins and the family retainer, Martin—who has been a teetotaler all his life but is taught that a little hair of the dog is good for a toothache…and soon gets roaring drunk with Stubbins during their play.  I also love the earlier scenes between Stubbins and his insolent office boy, played by Graham Moffat—who returned with Hay in the comedian’s next picture, Windbag the Sailor (1936).  Hay and Moffat were joined in Sailor by elderly character thesp Moore Marriott and in many of Will’s vehicles — including Old Bones of the River (1938), Ask a Policeman (1939) and Where’s That Fire? (1940)—the trio created sidesplitting comedy.  (Will broke up the partnership with his 1941 vehicle The Ghost of St. Michael’s…Hay wanted to go in a different direction, but there are more than a few fans that believe his movies just weren’t the same afterward.)

Despite his familiar film persona as an incompetent surrounded by forces threatening to overwhelm him, Will Hay was a very “learned friend” in real-life: he was a polyglot (fluent in several languages, including French, German and Italian), and also dabbled as an amateur astronomer as well as piloting aircraft.  His films aren’t quite as well-known on this side of the pond (my Facebook mate Matthew Coniam says that Hay’s 1938 film Hey! Hey! , which teams him with the great Edgar Kennedy, was an attempt to introduce Hay to American audiences though it never quite panned out) but they should be—and VCI is doing what they can to rectify this mistake.  The company has already announced three more double features (one of them a triple feature) of Will’s work—and when Volume 2 (containing Windbag and Good Morning) gets released on February 5th, you can be sure that it will find its way to the DVD player here at Rancho Yesteryear.
Posted by Ivan G Shreve Jr at 9:30 PM

Astrologist?! He was a leading astronomer if that's what you mean. There is a very distinct difference. As our late Sir Patrick Moore said, "Astrology proves one scientific principle which is that there's one born every minute".

Astrologist?! He was a leading astronomer if that's what you mean.

That is what I meant, O anonymous one...duly noted and corrected. I regret the error.