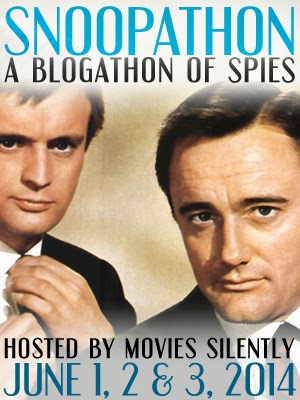 The following essay is Thrilling Days of Yesteryear’s contribution to Snoopathon: A Blogathon of Spies, currently underway from June 1-3 and hosted by Movies, Silently.  For a list of participants and the movies/topics discussed, click here. 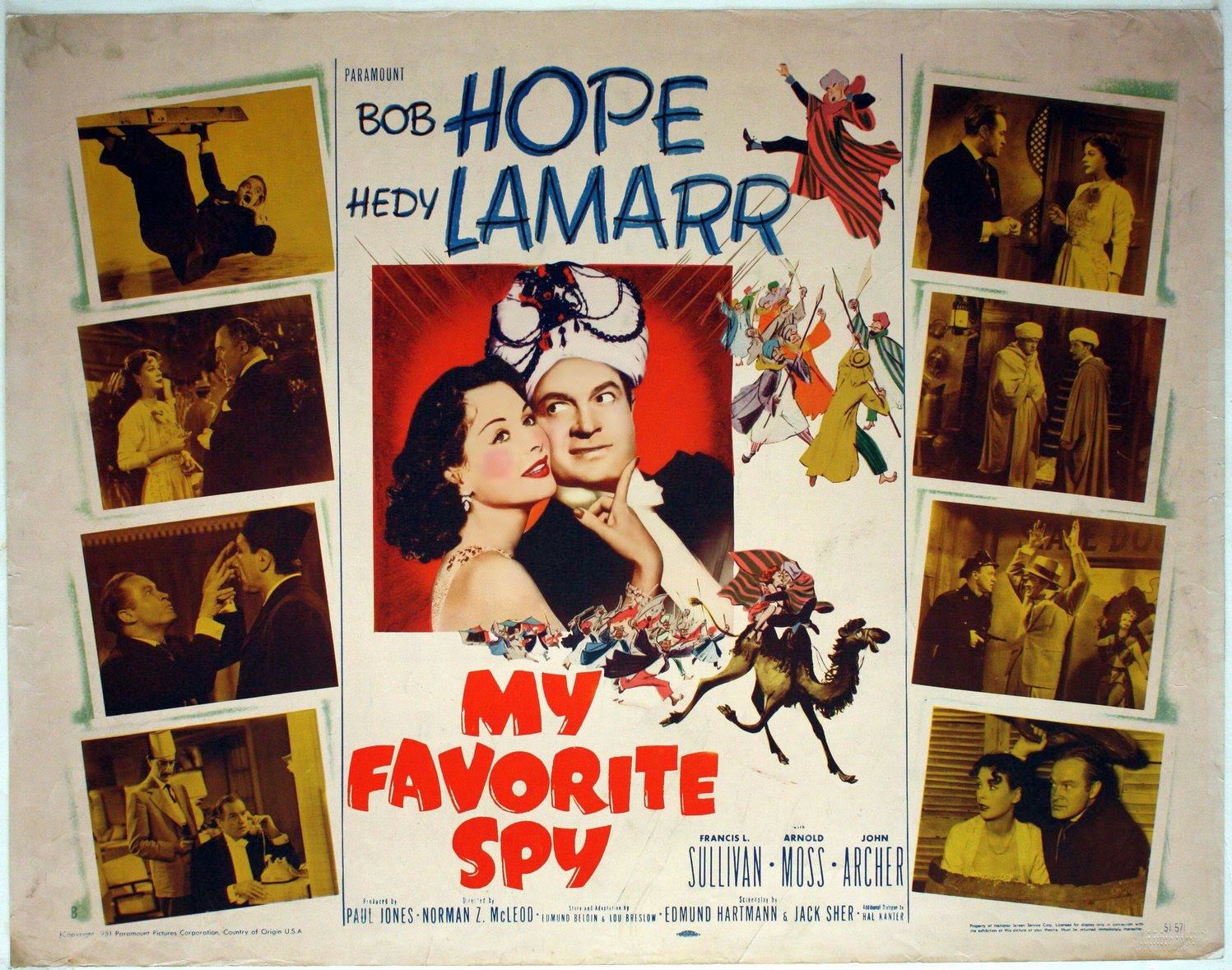 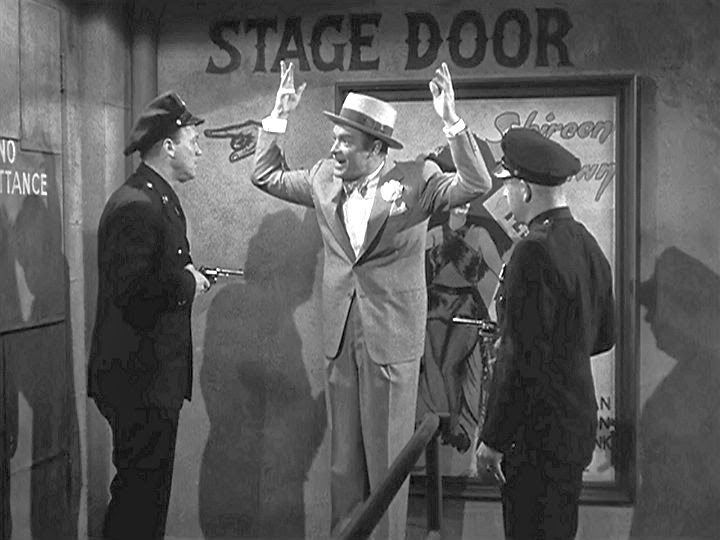 When international spy Eric Augustine (Bob Hope) manages to elude pursuing authorities at an airport where he’s scheduled for a flight to Tangier, an APB goes out to round up anyone matching his description.  One individual caught up in the dragnet is Peanuts “Boffo’ White (also Hope), a second-rate burlesque comic who could be Augustine’s twin brother.  Peanuts is given a thorough interrogation by government agents Henderson (John Archer) and Bailey (Stephen Chase), who express skepticism at White’s insistence that “they’ve got the wrong guy.”  Only when a report is phoned in that Augustine is trapped in a hangar at that same airport is White released. 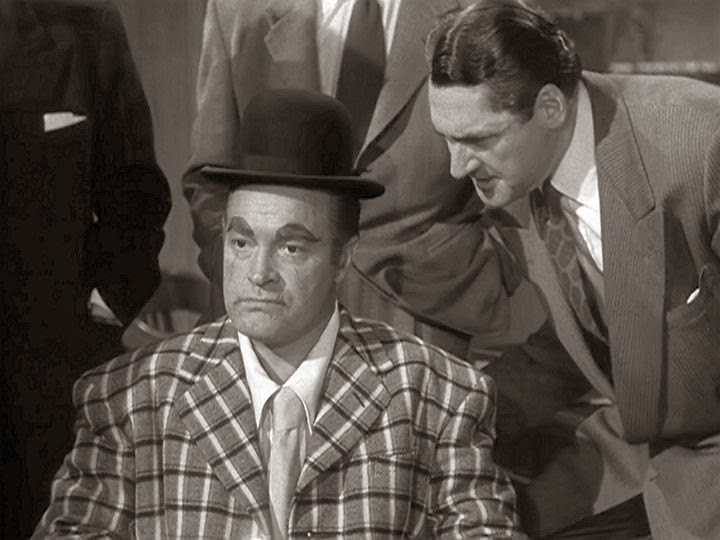 But Peanuts’ services will be requested a second time; Augustine is wounded in a shoot-out during his apprehension by the authorities, and it would appear that the fate of the free world rests in the hands of a funny man with a putty nose (though White assures them “Not all of that is putty”).  After receiving a phone call from a certain U.S. President who hails from the Show-Me-State, Peanuts is convinced to masquerade as Augustine; he’s quickly put through the paces of being groomed to impersonate the playboy spy and continues on to make that appointment in Tangier, where he will pay a man named Rudolf Hoenig (Luis van Rooten) a cool million for a cache of microfilm.  It won’t be an easy engagement for White; a ruthless competitor named Karl Brubaker (Francis L. Sullivan) is also angling for the microfilm, assisted by a woman from Augustine’s past: Lily Dalbray (Hedy Lamarr), nightclub chanteuse and dangerous femme fatale. 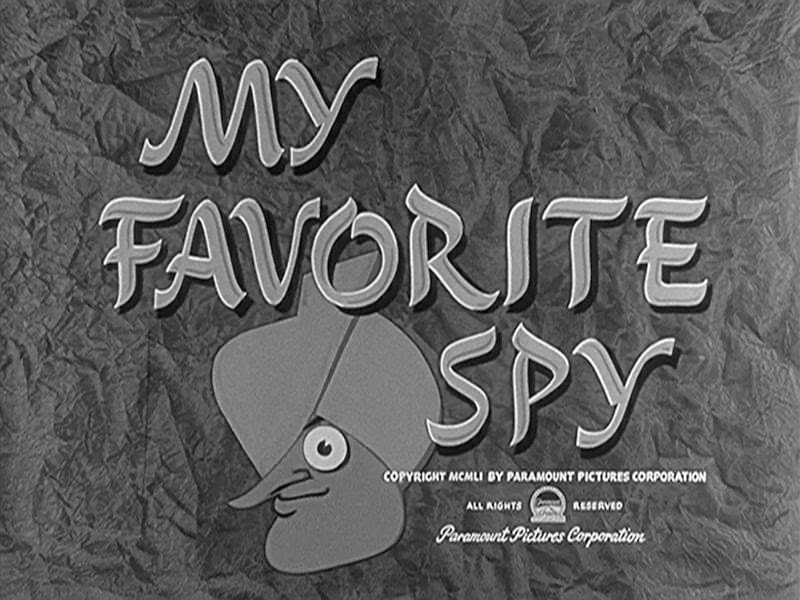 I’ve said in numerous blog essays in the past that the most successful vehicles of comedian Bob Hope boil down to a simple formula: the more menace in the story, the better opportunity for Hope (in the guise of whatever character he was essaying) to wisecrack and play the cowardly fool.  It stretches as far back as the feature comedy that established his bona fides, The Cat and the Canary (1939), but reached its apex in a trio of films with “My Favorite” in the titles.  The first of these was My Favorite Blonde (1942), which bears a lot of similarities to the above My Favorite Spy (1951); Bob is a vaudeville entertainer drafted to help an alluring British espionage agent (Madeleine Carroll), and tangles with major league baddies Gale Sondergaard and George Zucco.  (The film was titled “My Favorite Blonde” mostly due to Bob’s fondness for his co-star…but also because the original title of the story—by two of his former radio show writers, Melvin Frank and Norman Panama—probably would not have passed muster with the Hays Office: Snowball in Hell.)

Five years later, Bob made a second “favorite” in My Favorite Brunette (1947)—a hilarious comedy that sends up the detective genre, with his co-star the woman that he and partner Bing Crosby sparred over in their successful series of “Road” films: Dorothy Lamour.  Were it not for a Western spoof that the comedian made in 1952 (Son of Paleface), Brunette would be my favorite Hope romp; it’s one of the few successful “noir comedies” and pits the funster against such heavies as Peter Lorre and Lon Chaney, Jr.  Which brings us to My Favorite Spy. 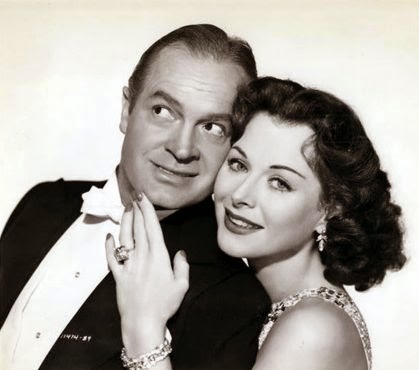 Scripted by Ed Beloin, Lou Breslow, Edmund L. Hartmann and Jack Sher (with additional gags supplied by Savannah, GA native Hal Kanter), the working title for Spy was Passage to Cairo, and the plot originally cast Bob as a schoolteacher assigned to a mission in that city after a successful impersonation as a gangster.  One aspect of the film that did not change, however, was Hope’s insistence on casting Hedy Lamarr as his leading lady.  Though Hedy was still a solid box office attraction (she had starred in the mega-hit Samson and Delilah two years earlier), her career had started to head into a slump that she hoped would be postponed by her participation in the film (the comedian aggressively wooed her, too, with gifts and flattery).  Lamarr was nervous about being inexperienced in comedy, but as she later related in Ecstasy and Me Bob assured her: “No one's going to laugh at you.  You play it straight.  You're perfect for the part.”

Hope wasn’t kidding about that; more than one source noted that in the movie’s climactic slapstick chase (a sequence that echoes W.C. Fields’ Never Give a Sucker an Even Break, which was recycled in Abbott & Costello’s In Society), Hedy stole the show…much to Bob’s annoyance, who insisted the scene be re-edited to emphasize that he was the comedian.  Even in its present form, Lamarr is a delight in Spy despite her diminished role; I often wondered why the two of them never worked in tandem again but it would appear that it was Hedy’s idea.  “We never looked right together,” she remarked.  (I beg to differ.) 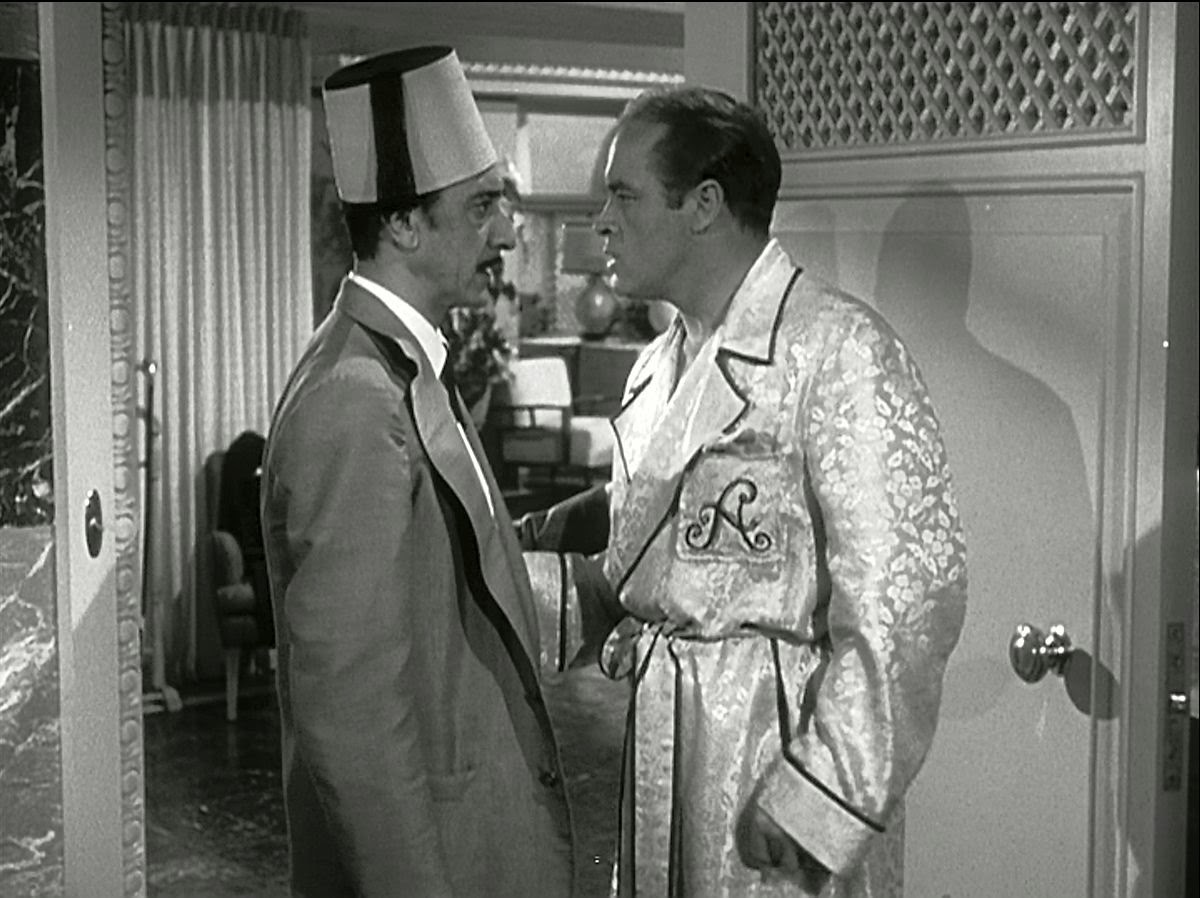 As for Bob…well, it’s novel to see him playing a dual role; even if the Augustine part is shunted to the background, Hope demonstrates that he was capable of more than just playing the clown (foreshadowing his later turns in The Seven Little Foys and Beau James, for starters).  For the most part, his character in Spy is painted in a simple stroke in an exchange with his “handler” Tasso, played by Arnold Moss; when Peanuts starts to have second thoughts about his mission, Tasso berates him: “What are you, anyway?  A man or a coward?  A grown-up or a sniveling baby?  A person I can depend on or a yellow-bellied sneak?”  “I’m in there someplace,” quips Peanuts. 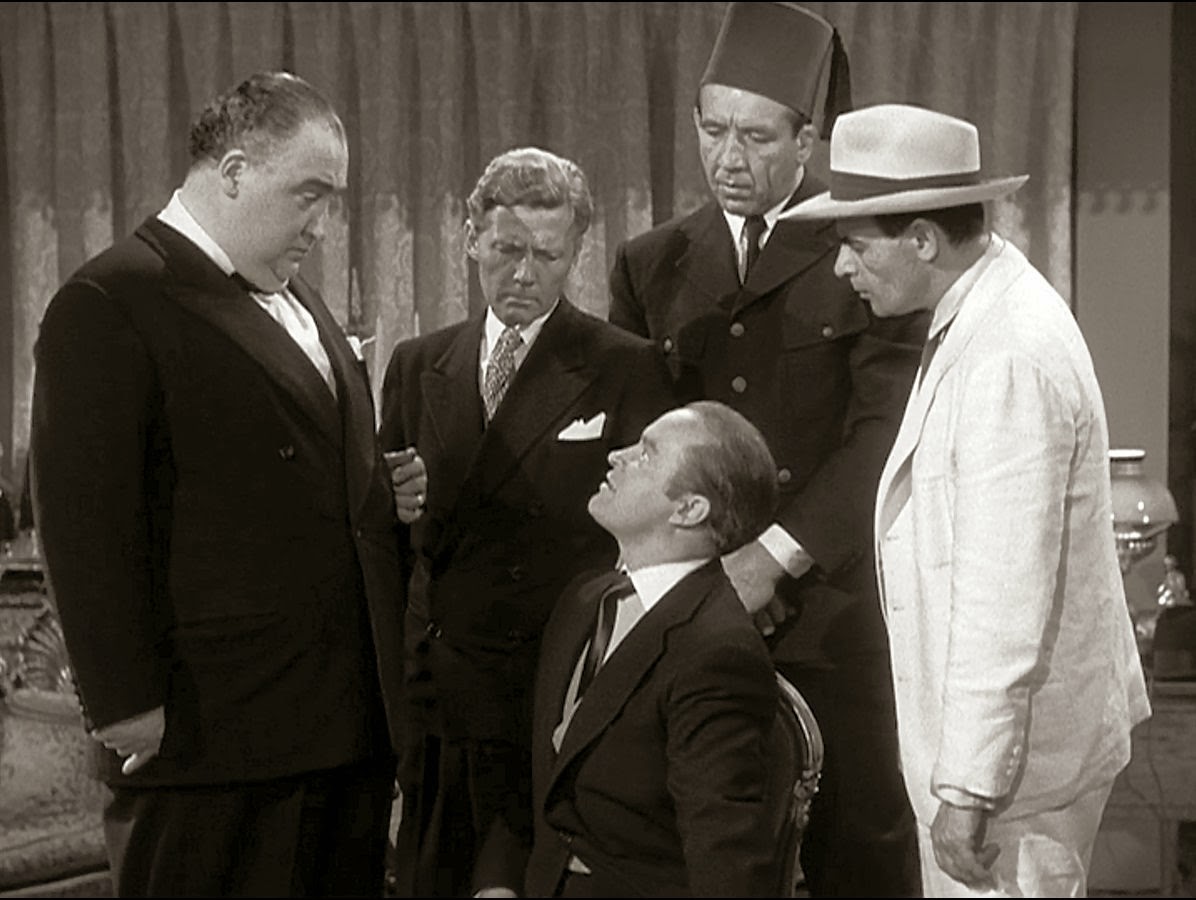 Spy’s supporting cast is more than up to the task of providing the needed danger for Hope’s comedy.  Francis L. Sullivan, “the poor man’s Sydney Greenstreet,” is first-rate as the diabolical Brubaker, whose henchmen include Mike Mazurki and Marc Lawrence.  John Archer, Luis Van Rooten, Stephen Chase, Morris Ankrum and Iris Adrian also dot the cast; Dobie Gillis dad Frank Faylen is included in the credits even though his role as a soused casino patron named “Newton” has been reduced to a mere walk-on (I suspect Faylen’s part was originally larger but ended up on the cutting room floor).  One of my favorite bits in Spy is an exchange between Bob’s Peanuts and a gypsy fortune teller played by Angela Clarke; she keeps trying to give Peanuts a card on which is printed the information for his rendezvous with Hoenig.  With every card Peanuts grabs, she warns him: “That one is a knife” and “That one is a gun.”

“You have a permit to carry these cards?” he asks her.  He later cracks: “Why don’t you go—if you hurry, you can catch the nine o’clock broom.”  This scene takes place during a song performed in French by Lamarr’s character, Just a Moment More (by Jay Livingston and Ray Evans)—though Martha Mears actually dubs Hedy’s vocals.  Bob also warbles a tune (written by Savannah’s favorite native son, Johnny Mercer), I Wind Up Taking a Fall, that’s one of the highlights in the movie…even if his pratfalls are executed by an all-too-obvious stunt double. 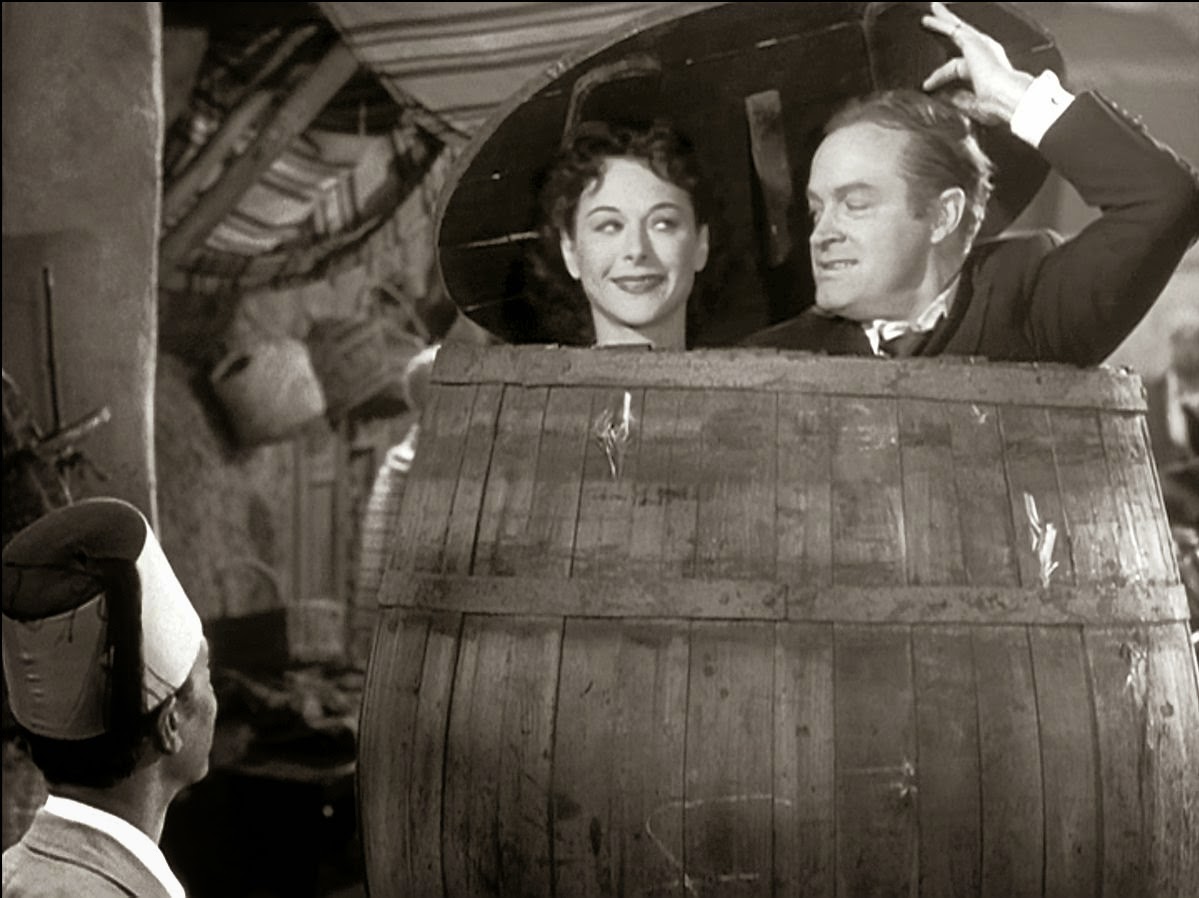 My Favorite Spy was the third collaboration between Hope and director Norman Z. MacLeod; the two men worked previously on Road to Rio (1947—my second favorite of the “Road” series, just behind Road to Utopia) and The Paleface (1948) and would team up twice more—oddly enough, they’re the two Hope vehicles that I consider among the very best of his 50s output, Casanova’s Big Night (1954) and Alias Jesse James (1959).  Spy itself is probably the weakest of the “Favorite” trilogy but still manages to produce pleasing chuckles from time to time.  I find it interesting that as the second of two Hope comedies released in 1951—the other being The Lemon Drop Kid—the more holiday-oriented Kid was actually in theaters earlier that year (in March) while Spy had its New York premiere on Christmas Eve.  The “world premiere” of the movie took place in Beautiful Downtown Bellaire, OH; Hope conducted a letter writing contest on his radio program that awarded the winner the chance to host a viewing of the film in their very own living room…and the winner was a housewife named Anne Kuchinka.  (This was preceded by a star-studded parade and the comedian’s weekly broadcast from Bellaire, when the winner was announced.)

For many years, My Favorite Spy was one of the few Bob Hope comedies unavailable to DVD—the movie had never even received a proper VHS release.  But Olive Films came to the rescue in September of 2013 (the movie is also available in Blu-ray), and I’d recommend the movie without hesitation to those folks who like a little levity with their espionage.  Bob Hope up to his neck in trouble…and…loving it!
Posted by Ivan G Shreve Jr at 1:30 PM

Thanks so much for coming aboard the event and sharing your insights. I too was unaware of Lamarr's comedic chops. I will definitely have to check this out!

Ivan, I've seen the other two "My Favorites" any number of times, but somehow I've never caught this one. Thanks for spurring me on to checking it out.

Great post, thanks! I can't wait to watch this movie again!

Oh gosh, now I have to order this film again. It's been such a while since I've seen it, but reading your post brings it all back..and you're quite right, Hedy and Hope should have teamed up again. Why even their names sound good together.

I haven't seen this one but, after reading your post, I feel my spotty classic film education is lacking! Thanks for the introduction – I know I'll love this one.

I like all three My Favorite Movies. I'm very happy you wrote about this one. Thank you for sharing.

I've seen 'My Favorite Brunette', but until your review I never knew Bob Hope made two other 'Favorite' movies! Thanks for the eye-opener, and the neat background info on Hope and the lovely Hedy!

Yay, I'm so happy you tackled on of the other My Favourite series as I've only seen the first one. I'm looking forward to finding this and seeing how Hope developed over the films as I thought his performance in Blonde was spot on. Thank you for sharing!