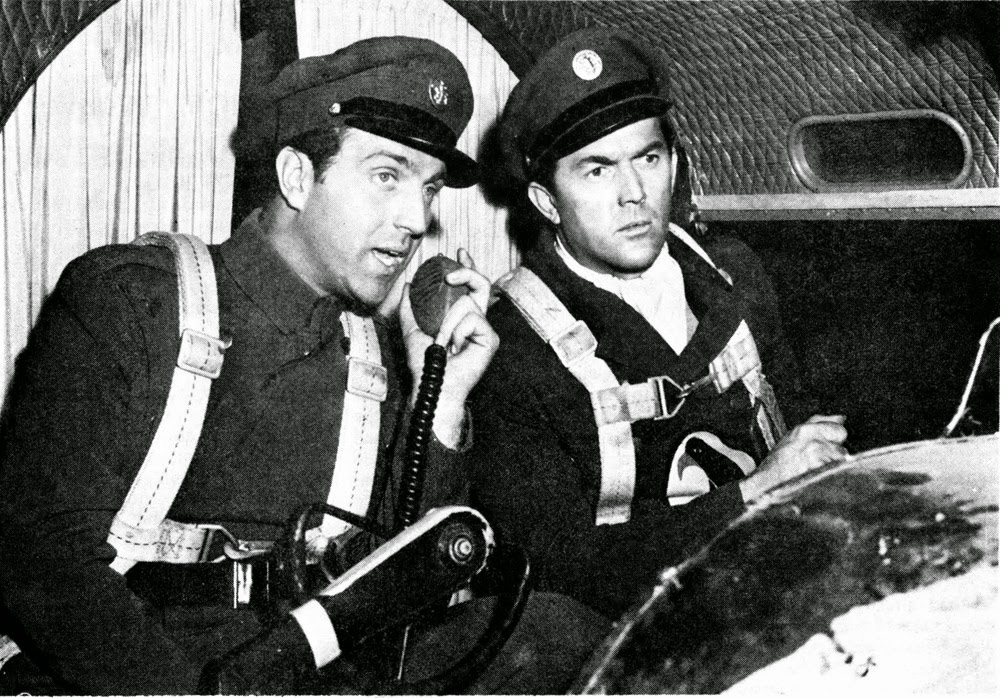 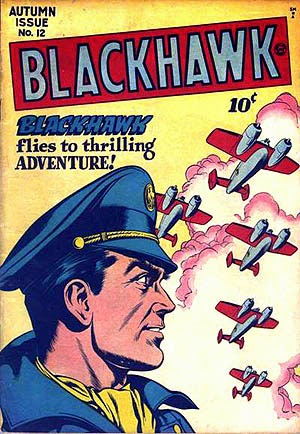 Blackhawk is based on a comic book that originated during WW II. Originally, he was the leader of a small army fighting against the Axis. As the series progressed, the army was whittled down to a small squadron comprised of representatives of countries occupied by Nazi forces.

Part of the appeal of Blackhawk at the time was that he and his team were all fighter pilots. But the aerial action in the serial is somewhat token, and the bulk of the excitement takes place on the ground, and usually immediately following a rain storm. I’ve never seen so many puddles on film before.

The use of industrial settings and rural roads is perhaps a cost-cutting measure, avoiding the expense of filming permits in town. Serials had grown progressively cheaper since their heyday. Bigger budget fare such as 1936’s Flash Gordon had been replaced by the cheapest of the cheap. Each of the bad guys’ various hideouts are identical, to confuse their various captives as to their location. Riiiggghht. 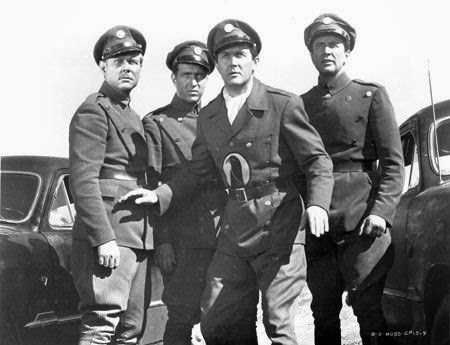 At the serial opens, Blackhawk (Kirk Alyn) and his team are resting comfortably stateside, working with the U.S. government. That’s when Laska (Carol Forman) and her comrades arrive, hoping to lure one of the Blackhawks, Stanislaus (Rick Vallin), back to his native country, which is now under the heel of communism. Stan won’t have it, so Laska arranges to have him kidnapped and replaced with his evil twin, Boris.

Infiltrating the Blackhawk organization, Boris wreaks havoc until the other Blackhawks suss him out and he pays the penalty for failure. Ramrodding Laska’s organization is the mysterious Leader, whom we see only from behind as he sits in his study plotting to destroy OUR America. 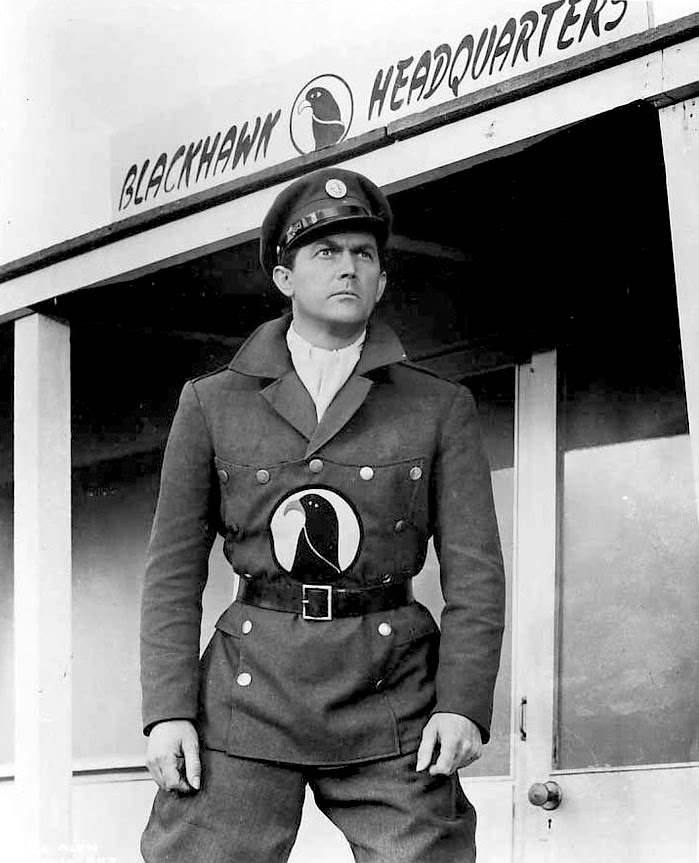 After a few chapters of resolving the Stan/Boris problem, Blackhawk is assigned to protect Dr. Rolph, who has created a death ray. The scientist has fashioned it into a device that looks remarkably like a dog wearing a surgical cone. Rolph is played by William Fawcett, who played another scientific genius in Batman & Robin (1949). Naturally, Blackhawk, et al. prevent the device from falling into communist hands.

But when element X comes into play, we are introduced to Mr. Case, whose Boston accent gives him away as the Leader. Supposedly, element X, as a fuel source, can provide an astounding amount of power. Laska and her cohorts want it, even if Mr. Case must die for them to get it. 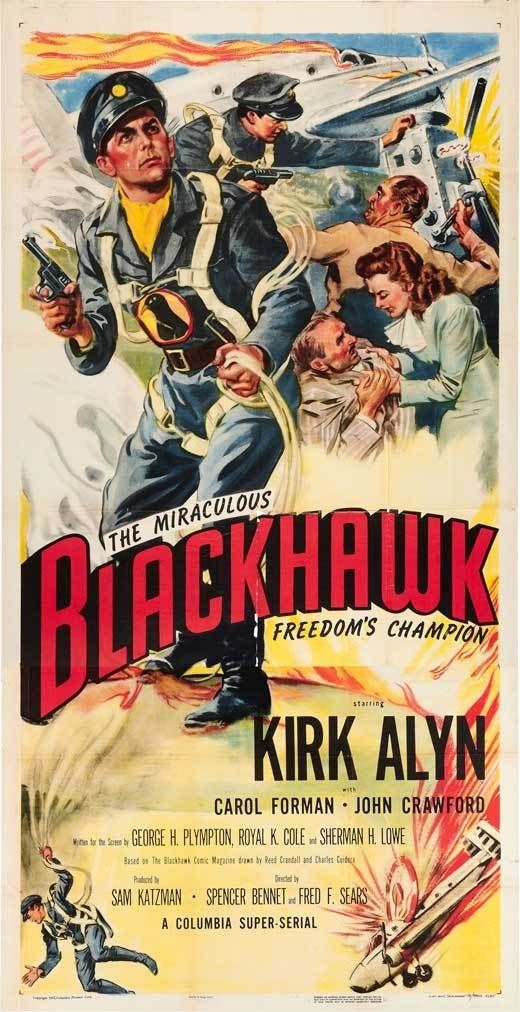 Blackhawk is proof that by 1952, the bloom was off the rose for serials. Cliffhangers had pretty much exhausted the repertoire of death traps for heroes to sidestep, and television had become the new home for heroes such as Dick Tracy, the Lone Ranger and Superman.

The production reunited Alyn and Forman, who had squared off against one another in Superman (1948). Though Superman had proven more bankable, Alyn does better as Blackhawk, not having to wear the cape and attempt super-feats via cheap special effects. Forman is also a bit more believable as a fellow traveler than as the villainess Spider Woman. Despite all the Blackhawks being European, none of them have accents, other than the unfortunate Weaver Levy, who plays Chop Chop, and is relegated to serving as the Blackhawk’s Chinese cook/mascot.

Out of idle curiosity, I watched the serial on YouTube one Sunday when I had nothing better to do. If it’s available on DVD anywhere, I wouldn’t recommend buying it, but watching it once for free just to get it over with – well, that’s up to you.
Posted by Ivan G Shreve Jr at 12:00 PM

Though I think we agree on most things serial, I'm of a different opinion on this one; I liked it quite a bit. Most of my negative feelings about 50's serials is that they feel like TV, and I think this one still feels like a serial, which is a bit like it tasting like ice cream...of which I've never found a bad one. I feel the same about radio shows; I've rarely heard a bad one! :) (I just stumbled onto the first show that I heard at age 9, btw, and after 38 years, I almost fainted!)

This is a good reminder for me to get this, if available!