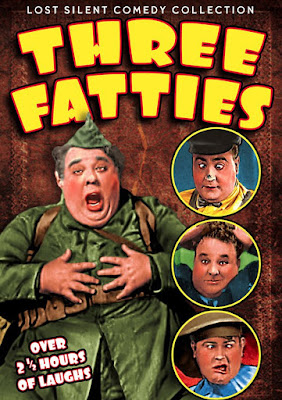 In his book Lame Brains & Lunatics, film historian Steve Massa describes the comedic trio known as A Ton of Fun thusly: “{T]he idea being that if one fat guy was funny, then three would be a riot.”  The corpulent threesome was comprised of Frank “Fatty” Alexander, Hillard “Fatt” Karr, and Bill “Kewpie” Ross, with Alexander and Karr the silent comedy veterans. (Karr had a starring series of “Funny Fat Filbert” comedies for Josh Binney Comedies before moving on to Fox and then Universal; Alexander was a Mack Sennett veteran in addition to stops at Century and Vitagraph.  He then worked as a foil for Larry Semon for nearly a decade.)  From 1925 to 1928, the plus-sized mirthmakers appeared in thirty-six two-reel comedies for producer Joe Rock and his Standard Cinema Corporation.  (That’s why seeing “A Standard Comedy” at the bottom of some of the comedies’ title cards is often funnier than the content in those two-reelers.) 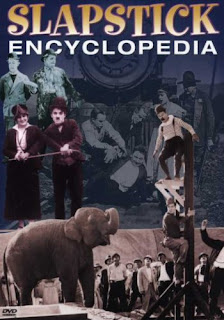 I sampled some of A Ton of Fun’s clowning this week in an Alpha Video Classics release available from Oldies.com entitled Three Fatties (the alternate name for the chubby trio).  The DVD box boasts that it’s an “exclusive collection of nine vintage shorts” which is a bit of an “expedient exaggeration,” to quote Cary Grant’s character from North by Northwest.  I’d seen two of the two-reelers previously in other collections: Heavy Love (1926) is available on the American Slapstick DVD, while Three of a Kind (1926) is among the many comedies spotlighted on Slapstick Encyclopedia.  Fatties does include the first Ton of Fun collaboration, Tailoring (1925)—and while I’ll freely admit I don’t have the inside skinny (sorry about that) on how Alpha decides which shorts will make their DVD’s final cut, they might have wanted to strike this from the list.  The print is in abysmal shape, so bad it’s a chore reading the title cards at times (which is a shame, since they actually provide a few laughs; one describes a character as so cheap he “fired a shot Christmas Eve and told his children Santa Claus committed suicide”).  Tailoring is a pretty incoherent affair with a Katzenjammer Kids vibe; one of the Fatties (the print is so bad I can’t tell which member it is) is made up to look like “The Captain” from that classic comic strip while the other two are dressed like overgrown children. 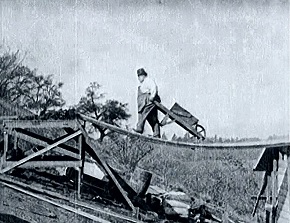 Massa describes the Ton of Fun comedies as “a clever and fun series” …though I think the jury is still out on the “clever” part.  He further observes that “[t]he usual format for the shorts consisted of putting the Fatties in situations and locations where fat men should fear to tread and then milking all the weight-related gags possible...”  Maybe I’m being a bit too harsh (or maybe I haven’t seen the Fatties at their best) but I didn’t find many of the shorts on the collection particularly outstanding…though they do provide some amusement from time to time.  The aforementioned Heavy Love features the plumpish threesome as carpenters, building a house for Lois Boyd (another Sennett veteran, and a frequent leading lady in their comedies); I examined Boyd during Love, and she didn’t seem to exhibit any signs of mental illness—so why she employed these jamokes in the first place is a complete mystery.  Heavy Love does wrap things up with a funny closing gag involving an eccentric who informs Lois and the boys the house has been built on the wrong lot and will have to be moved. 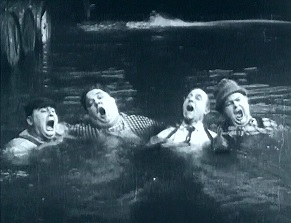 There are some risible moments in Old Tin Sides (1927)—the porcine trio help out in a general store—including a little old lady who somehow gets a leaping fish down her skirt (it’s a long story) and goes through some hysterical gyrations and leaps courtesy of a stuntman.  The two-reeler also features hilarity as the TOF and their boss flood the cellar with homemade applejack and drunkenly break out in a chorus of “Sweet Adeline.”  In addition, I liked Standing Pat (1928)—the penultimate Ton of Fun comedy—in which our heroes use a miracle cleaner to destroy both suits of clothes and cars of unfortunate customers, then later have to deliver a crated piano to a music professor (one of their earlier victims).  The stunt work featuring the team losing control of their car and then the runaway piano as it meanders down steep hills will appeal to anyone who enjoys physical comedy. 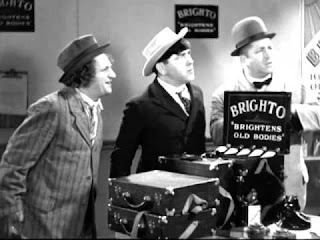 The cleaning fluid plot in Standing is reminiscent of the “Bright-O” gags featured in the Three Stooges short Dizzy Doctors (1937) …and to be honest, much of A Ton of Fun’s shtick is similar to that of the later comedy trio who made a cottage industry out of face-slapping and eye-pokes.  Both teams relied on physical destruction for comedy, and as someone once observed of the Stooges, at times the titles of their shorts were funnier than the finished product (the Ton of Fun comedy The Heavy Parade [1926] is a take-off on the 1925 M-G-M classic The Big Parade.)  Two of TOF’s shorts are titled Three of a Kind and Three Wise Goofs (1925), which could easily be appropriated for Stooges shorts.  (They actually do share one title: A Ton of Fun’s Three Missing Links [1927] features the boys as motorcycle patrolmen…though the Stooges’ similarly-titled comedy in 1939 has Moe, Larry, and Curly loose in the jungle making a movie.) 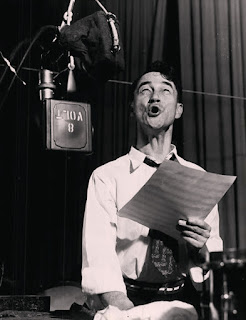 I did get a kick out of seeing a few familiar names in the credits of these shorts: Tay Garnett, who would later direct films like The Postman Always Rings Twice (1946), is credited with the title cards on Three Wise Goofs, while Raymond McCarey (brother of Leo) and Pinto Colvig are credited as writers on Standing Pat.  Ray would go on to direct such funsters as Laurel & Hardy (Scram!), Our Gang (Free Eats) and the Three Stooges (Three Little Pigskins), while actor-animator Colvig is best known as the voice of Goofy in those classic Walt Disney cartoons.  Harry Sweet was in the director’s chair for Three of a Kind; he also acted in silent films but is perhaps best remembered for starting up the shorts department at R-K-O and helming many of the early Edgar Kennedy two-reelers until his untimely death from a plane crash in 1933.

I picked up Three Fatties during the Oldies.com continuing-in-perpetuity 5 for $25 sale (though I think it’s now 10 for $39.90), and while the print quality isn’t particular sparkly (the screen grabs probably tipped you off to that) the comedies are mostly watchable (Tailoring is the only one that’s really terrible).  If you’re looking for a way to sample the work of a forgotten comedy trio for pennies on the dollar, this is the advisable way to go.
Posted by Ivan G Shreve Jr at 7:00 AM