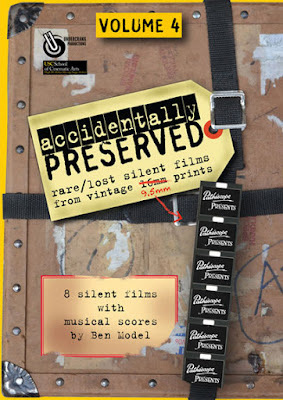 Because I benefited from being a past supporter of Undercrank Productions’ previous Accidentally Preserved releases (and you can too, by subscribing to the e-mails)—I got to order Volume 4 before its official release this Tuesday, and at a nice discount—that’s why you’ll be reading about the DVD here at TDOY and not at ClassicFlix (though I’m sure they’ll add the title to their inventory soon).  Undercrank’s Ben Model has once again produced a splendid disc of silent rarities that have been paroled from the film vaults, with a much-valued assist from John McElwee and Greenbriar Picture Shows. 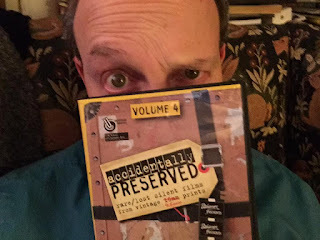 Model’s Undercrank Productions has entered into partnership with the USC Hugh M. Hefner Moving Image Archive (yes, the same Hugh M. that founded Playboy magazine), and they can also take several bows for the shorts featured on Accidentally Preserved, Volume 4.  The movies on AP4 are all from 9.5mm safety film; in 1922, the Pathé-Frères company of France introduced this film format via a company called Pathé-Baby—and what distinguished this from other formats was that the perforations were in the center of the film, between each frame.  The following year, the 9.5mm format was introduced in the United Kingdom by Pathéscope. 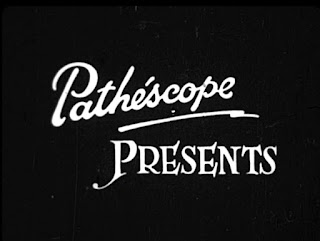 9.5mm film was unveiled in the U.S. in 1925…but would eventually find itself overwhelmed by the 16mm film format, which made its debut two years earlier courtesy of Kodak.  What made 9.5mm film so different—in addition to the center perforations—was that many of the silent movies had “notched” intertitles; the intertitles were printed for anywhere from 2-8 frames, with a small notch punched into the edge of one of them.  The notched frame would be caught by the projector, allowing it ample time to appear onscreen so that it could be read before moving on with the movie.  This would allow a 9.5mm release to be made with 300 feet (with no loss in image quality) compared to a 16mm release, which was comprised of 400 feet (that’s a savings of 25%!). 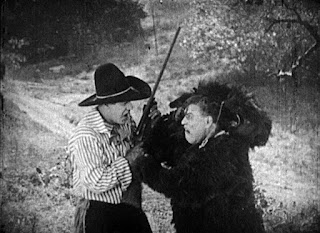 9.5mm film was not only used as a home-use release platform for silent/sound films—it functioned as a home movie-making format as well.  (However, I’m reasonably certain that the individuals interested in purchasing AP4 have little curiosity in the extended director’s cut of little Montmorency’s second birthday party.)  A lot of silent films that survived the ravages of time and neglect exist only because they were released to 9.5mm and some of them saw releases only in Germany, France, the UK, etc.  The selections on this DVD never saw a 16mm release in the home movie market…and in many cases, are not available in film archives on 35mm. 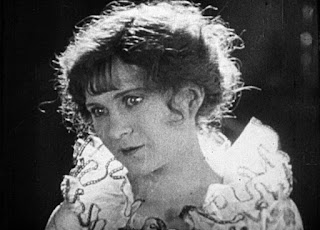 Here’s an example (and one of the highlights on AP4): Tides of Passion, a 1925 Vitagraph release starring Mae Marsh.  Marsh was one of the big names of early American silent cinema (known for her appearances in D.W. Griffith’s The Birth of a Nation [1915] and Intolerance [1916]), and Passion—directed by Vitagraph co-founder J. Stuart Blackton (Humorous Phases of Funny Faces)—was one of the actress’ last silent films.  This two-reel Pathescope version (released in November of 1930 as The Sea Repays) may be the only extant copy of the motion picture. 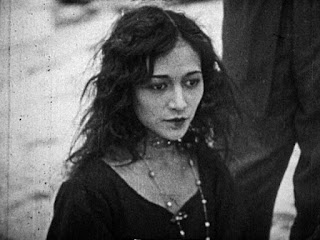 Marsh plays a woman married to a real bounder (Ben Hendricks, Jr.) who’s also a bit of a hound when it comes to cheating on his wife; after an extended stay in India with his regiment (where he found the time to engage in both fighting and whoring), Hendricks returns to his stomping grounds but is delayed when he falls overboard from a vessel.  He washes up on an island and is taken in by another woman (Laska Winter)—then he proceeds to enjoy a dalliance with her.  Hendricks’ problem is that he becomes easily bored with the women who are given the pleasure of his company, and when he finally decides to return to Marsh, Winter (who’s not down with being kicked to the curb) arranges for a series of events that result in his illness and subsequent death (serves him right, the swine).  Even in its truncated two-reel form, I found Tides a positive joy, my ClassicFlix colleague Fritzi at Movies Silently nails it when she writes that Tides “is just top notch from beginning to end.” 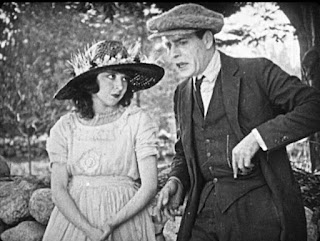 Since the survival of Tides of Passion is in doubt, it’s reassuring to know that a complete 35mm print (with French titles) of The Ninety and Nine (1922) does exist…though as of this writing it’s biding its time in the George Eastman Museum.  Which is a shame, because the one-reel version of the film (released in 9.5mm as Through Fire in 1930; the edition used for AP4 had spliced-in German titles, which had to be translated into English courtesy of historian Ulrich Ruedel) whets your appetite for the whole enchilada.  Colleen Moore and Warner Baxter star in a film based on a popular stage melodrama (it debuted in 1902); its reputation was such that audiences were already familiar with the source material by the time of the movie’s release by Vitagraph in 1922.  The one-reel treatment boils down Ninety and Nine’s first six reels to five minutes, allocating the rest of the time to its exciting fire-and-railroad conclusion.  Ninety and Nine’s intricate plot is summed up in a few titles before its AP4 presentation (to help those who may be confused as to what the movie is about); I won’t even begin to sum it up here.  But it does make you want to see the entire movie, which can only be a good thing. 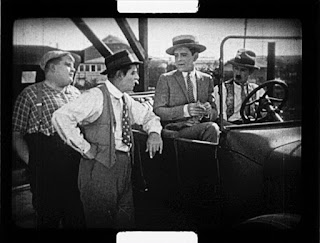 The previous three volumes in the Accidentally Preserved franchise concentrated on lost silent comedy treasures…and Volume 4 won’t disappoint those fans.  I was most looking forward to seeing The Wages of Tin (1925—released in 9.5mm in September 1929 as Billy the Ford Buster), because I’ve developed an interest in Glenn Tryon ever since I reviewed Lonesome (1928) for my “Where’s That Been?” column at ClassicFlix.  (I’ve been able to grab Long Pants [1926] from The Greatest Cable Channel Known to Mankind™, and I have shorts like Meet the Missus [1924] and Hold My Baby! [1925] on some Alpha Video DVDs around this jernt somewhere.)  Tin is a dandy little comedy centering on Tryon’s attempts to rent and drive a “horseless carriage” (you rarely go wrong with a Hal Roach production), and I can definitely see the Harold Lloyd similarities in star Tryon.  AP4 also introduced me to British comedian Walter Forde with Walter’s Paying Policy (1926); Forde was often described as “a British Harold Lloyd” but I don’t think I had viewed any of his work until I saw Policy (I knew Forde’s name from some of the films he directed later in his career, like Charley’s [Big-Hearted] Aunt [1940] and Gasbags [1941]).  Policy is also a treat, with some side-splitting gags in a story of Walter’s determination to sell a client insurance (he works for “Busy Bee Insurance”—“You won’t get stung!”) 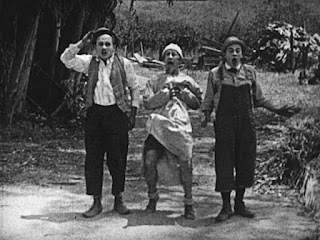 Our Gang fans will delight in spotting “Pete the Pup” in the Bobby Ray comedy Meet Father (1924—released in 9.5mm as Oh, For the Noble Art in February 1932) and there’s much mirth to be enjoyed in the Ben Corbett-Pee Wee Holmes romp A Man’s Size Pet (1926—with character veteran Robert McKenzie running around in a bear suit) and ‘Morning, Judge (1926), an entry in the Carrie of the Chorus series.  (The Carrie comedies were produced by animation kings Max and Dave Fleischer in an interesting foray into live-action filmmaking, Judge is a one-reel cut-down of the original two-reeler—released in February 1938 as Chicken Cooped.)  The only comedy on AP4 that wasn’t my particular meat was Nonsense (1920), one of the early “Mermaid” comedies directed by “boy wonder” Jack White.  Nonsense does have an amusing bit set in a dance hall: a poor girl (Marvel Rea) who’s been seduced by the silver tongue of a cad (Frank J. Coleman) is forced to sing for the barflies…and her sad rendition of Home Sweet Home so moves the contingent to tears that even an individual who’s taking one of the girls upstairs for a little what-have-you is unable to complete the transaction, weeping as he comes back down the stairs.  (There’s a reason why there was an upstairs section of the Long Branch on Gunsmoke, folks.)

John Sinnott writes at DVD Talk that AP4 is “a bit more hit-or-miss than the previous installments” (in fairness, he does speak highly of the finished product) but I have to dissent: I thought the material on this DVD was some of the strongest that I’ve witnessed in this fascinating franchise devoted to obscure and neglected silent gems.  Accidentally Preserved Volume 4 is a must purchase for devotees of silent cinema, and I guarantee you will not be disappointed.
Posted by Ivan G Shreve Jr at 7:00 AM

Very cool. I can't wait to see it.

As to the Hugh Hefner U.S.C, Hugh Hefner has done an amazing amount of work for classic films and film preservation. While I don't support his business, I appreciate everything he has done for the classic film community.

As to the Hugh Hefner U.S.C, Hugh Hefner has done an amazing amount of work for classic films and film preservation. While I don't support his business, I appreciate everything he has done for the classic film community.

Amen, Sister Amanda. Hefner played a major role in the restoration of many of the Universal Rathbone-Bruce Sherlock Holmes films, so if he had to sell a few copies of a nudie magazine I can't raise much of an objection.