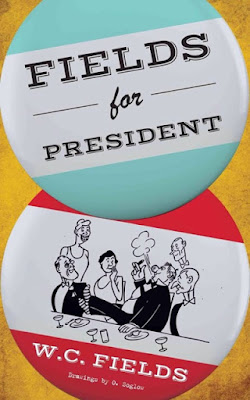 Godfrey Daniel!  If it seems rather coincidental that this week’s Thrilling Days of Yesteryear book review earned a berth on the blog post schedule due to last week’s essay on Sally of the Sawdust (1925) …well, you’re half-right.  I mostly timed this to coincide with Election Day tomorrow, when our long national nightmare will be over…and the serious drinking can begin.  (So it’s understandable that I would think of Fields.) 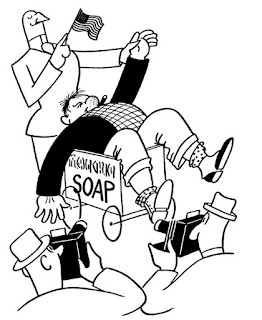 I’ve tried to be good and not rant about politics on the blog this year (if you follow me on Facebook or Twitter, however, those outlets honor no such rule—which has not endeared me to some of my social media colleagues) but whatever side of the fence you’re on, I think we can agree that our rotted-with-corruption political system has saddled us with two of the most unpalatable president candidates in the history of the republic.  As such, any respite from this horrible contest—be it baseball or the 50% off Criterion sale at Barnes & Noble—should be welcomed with more than just open arms…it should be invited into the house and bade sit a spell.  (There are a couple of Blu-rays calling my name at Kino-Lorber, where they’ve considerably marked down some noir titles.  Better luck next time, B&N.)

A month or so back, I got a heads-up from BookBub that the Kindle edition of W.C. Fields for President was on sale for $1.99.  So, I plopped down two wrinkly dollar bills for the privilege of reading musings from one of my comedy idols.  (Had I not already voted via absentee ballot, I might have written in The Great Man as my candidate of choice.) 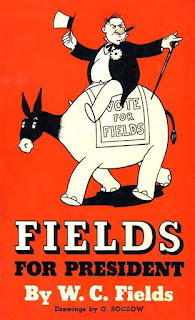 William Claude wrote his presidential manifesto in 1940—the same year that his former movie nemesis Gracie Allen (from International House and Six of a Kind) also threw her chapeau into the ring as a candidate for the Surprise Party (insert gratuitous Radio Spirits plug here).  It’s been reprinted many times in the interim (in several editions as, if I may quote friend of the blog “Mr. Television,” an actual book), because its parody remains timeless.  “I am truly a candidate with both feet on the ground,” Fields writes in President.  “I take no fol-de-rol from any man, much less any fiddle-faddle.  And when, on next November fifth, I am elected chief executive of this fair land, amidst thunderous cheering and shouting and throwing babies out the window, I shall, my fellow citizens, offer no such empty panaceas as a New Deal, or an Old Deal, or even a Re-Deal.  No, my friends, the reliable old False Shuffle was good enough for my father and it’s good enough for me.”

What I have always revered about The Great Man is his love of the English language (I’m constantly using Fieldsian exclamations in real-life, like “Mother of pearl!” and “Suffering sciatica!”) and it’s this affection for words that makes W.C. Fields for President an entertaining read.  The book is divided up into several sections: 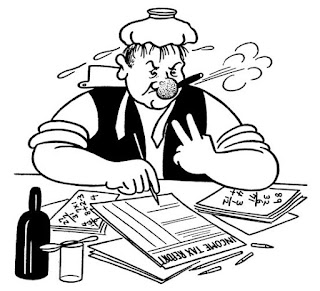 1. Marriage: Since approximately half the population of the United States is made up of the fairer sex, any President worthy of the name should be familiar with the intricacies of the matrimonial problem—unless he wants to change his residence from the White House to the château de la chien (doghouse).

2. Income Tax: The major responsibility of a President is to squeeze the last possible cent out of the taxpayer; thus he should be at least familiar with the intricacies of the ransom notes that the Internal Revenue Department sends out each spring.

3. Resolutions: If the chief executive is not an expert in the art of making resolutions, how can he hope to break his (Ivan’s note: Or her) campaign promises gracefully? 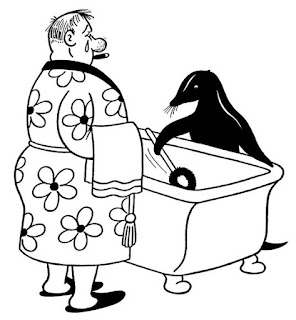 4. Etiquette: At a state dinner, should the Nazi ambassador be served Chateaubriand a la Marseillaise?  Failure to understand this delicate question might well plunge our nation into war.

5. Physical Fitness: There is no room in the White House for a man who is afflicted with barber’s itch, spots before the eyes, hang-nails or housemaid’s knee.  A President must now how to keep himself fit—else who would throw out the first ball at the Washington Senators’ opening game?

6. The Care of Babies: Shall didies be folded square or triangular?  This is the burning question of the day, and the better the candidate understands the little darlings, the more competently he can decide the issue.

7. Business Success: If he knows nothing else, a President should at least understand the secret of success in the business world.  For, after all, what is the Presidency but a glorified business—or, at least, a fine racket? 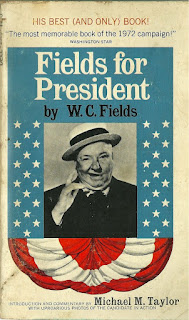 Topicality in comedy is always endangered by an expiration date…so some of the humor in the Fields book doesn’t wear well (the Nazi ambassador gag is a good example) and there are inarguably jokes that will sail over the heads of readers who took a lot of naps in their high school history classes.  But as Shakespeare wrote in King Lear: “Jesters do oft prove prophets.”  There is much truth in W.C.’s political humor, including one of my favorites: “At any rate, here is my best advice on the matter of deductions: just count off on all your fingers all the items you suspect might be deductible…and then forget them, because they aren’t.”

This latest edition of W.C. Fields for President was re-released in February of this year from Taylor Trade Publishing (Rowman & Littlefield) and features a foreword by the “Raconteur to the Stars,” Dick Cavett.  I have a lot of respect for Dick, but I’ll admit he doesn’t endear himself to me whenever a major celebrity passes on…because they usually collar Cavett for a TV program to remember the deceased and he has difficulty shutting the hell up when needed.  But this bit in Cavett’s introduction did produce a rather audible snicker: “The late Dorothy Kilgallen, best known for being the ‘What’s My Line?’ panelist who reportedly punched a tiny hole in her blindfold to more easily identify the ‘Mystery Guest’ before anyone else could…”  (I laughed at this—and I realize this is going to make me sound like Cavett—because it reminded me of an observation Fred Allen once made to a friend about Kilgallen and Arlene Francis on Line: “They really want to win this thing!”)  Dottie wasn’t a fan of Fields, remarking “Friends keep telling me how funny W.C. Fields is.  I looked at two of his movies.  He is not funny.”

I suspect Kilgallen would get on famously with my mother—as for me, I agree with Mr. Cavett that Dot’s observation vies for “Dumbest Remark Ever Made About A Comedian.”  (Though Dick’s memory is jogged by a letter received at The Jack Paar Show—where he toiled as a joke writer—from a viewer asking why Paar kept inviting Jonathan Winters on.)  My point—and I do have one—is that if you’re a fan of W.C. Fields, you will love this book.  If not…well, I can’t help you.  In the immortal words of our candidate: “Remember, folks, cast a vote for Fields and watch for the silver lining.  Cast several votes for Fields and watch for the police.”  I thank you.
Posted by Ivan G Shreve Jr at 7:00 AM