Book Review: A Year at the Movies: One Man's Filmgoing Odyssey 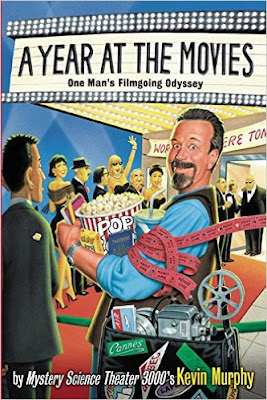 I will hold you in suspense no longer: the reason why I did a review of Frank Conniff’s Twenty Five Mystery Science Theater 3000 Films That Changed My Life In No Way Whatsoever last week was that I purchased the Kindle edition shortly after the e-book I’m reviewing this week—A Year at the Movies: One Man’s Filmgoing Odyssey.  A Year at the Movies was penned by Conniff’s MST3K colleague Kevin Murphy, an actor-writer who was chiefly responsible for breathing life into “Tom Servo,” one of the “bots” on that cult TV series.  Kev’s book was selling for $1.99 at Amazon (thank you, BookBub) and I figured it was worth a flutter (it’s regularly $12.99); after making that purchase I spotted the Conniff book and thought: “Why not make this a double feature?” 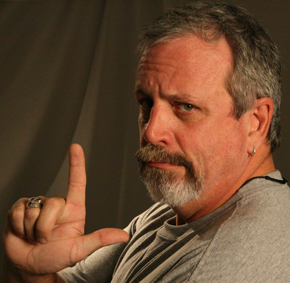 I think Murphy has written the better book, to be frank (see what I did there).  It’s quite funny at times, and chronicles in detail an experiment Kev decided to conduct: going to the movies once a day, every day, for an entire year.  It’s a task best undertaken by professionals, because Murphy had to sit through some pretty awful movies in 2001 (the year he decided to embark on this project).  His impressions on these bits of cinematic offal often make up the laugh-out-loud portions of his book; since Warren Beatty has a new movie out, let’s look back at the last time he presented moviegoers with an example of why he should seriously consider just resting on his laurels: 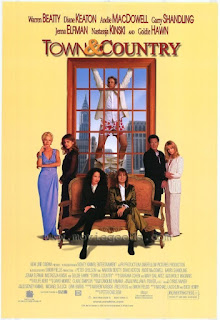 “For the love of all that is holy and decent, do not see Town & Country.  Not at a theater, not on video, not on cable, satellite, or broadcast television.  Do not glance at it as it spills out from someone’s portable DVD player.  Put on an eye mask and go to sleep if it winds up on your flight.  If you are invited to dinner at your friends’ trim suburban home, grope through their personal belongings while they’re putting the sea bass and Italian eggplant on the grill; if you happen across a copy of Town & Country in their video collection, run out to the little Mexican fireplace back near the hot tub and hurl the tape in, laughing in the glow of the flame as the acrid black smoke of burning plastic ascends into the neighborhood.”

“It’s a movie about the depraved, perverse, and twisted excuses for lives that rich people lead,” Murphy writes further.  “It’s about them endlessly boinking each other.  Maybe I’m just different, but I don’t give a good healthy damn about rich people.”  Mighty proletarian of you, Kev, and I concur wholeheartedly.  In one chapter of the book (the book is separated into 52 chapters, representing each week he spent at the nabes), he has another MST3K alumnus, Mike J. Nelson, accompany him to a showing of Corky Romano…for the simple purpose of witnessing the audience suffer from its sheer awfulness: 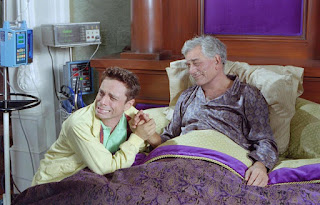 “And please say some prayers for Peter Falk.  Peter plays Corky’s dad, a vile, bigoted yet loving mobster on his deathbed.  Now here’s a guy with a bookshelf full of awards, who’s worked with Wim Wenders, David Mamet, John Cassavettes [sic], Walter Hill; once the highest paid actor in TV history, a legend whose multifaceted career spans over half a century.

Now, at seventy-four, he does Corky Romano.

You know the risk he’s running?  He could croak tomorrow, and his obituary would have to mention that his last film was Corky Romano.  Would you want that in your obit?  It’d be worse than dying of syphillis [sic].  Think of poor Peter Sellers, whose last film was The Fiendish Plot of Dr. Fu Manchu and he never got a chance to live it down.  The lesson is to be careful in your old age, and if you are over sixty, under no circumstances do a movie starring Chris Kattan.”

(Falk, who shuffled off this mortal coil in 2011, was spared this indignity in the obits I read.) 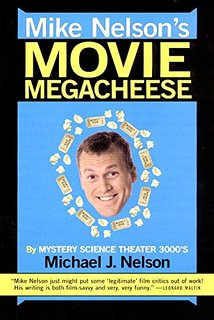 Now—before you get the impression this is yet another book poking riotous fun at films that, in a saner world, would never promenaded before a motion picture camera, I need to tell you right off that A Year at the Movies is no such tome.  (For that, you should check out Mike Nelson’s Movie Megacheese.  Or if you’d rather read a better book [sorry, Mike—facts are stubborn things], acquire a copy of Better Living Through Bad Movies—penned by my good friends Scott Clevenger and Sheri Zollinger.  It’s not only available in Kindle form—and, as Mike “Mr. Television” Doran would say, an actual book—but an audiobook has just been released as well!)  A Year at the Movies is all about the moviegoing experience; sure, Murphy sits in a darkened theater…but that theater can be anywhere from the world’s smallest (the Terrace Theater in Timonee, New South Wales) to one entirely constructed of ice (at the Hotel de Glace, Beauport, Quebec).  Kevin channels his inner Morgan Spurlock (the Fairmont, WV who directed Super Size Me) by deciding to subsist on nothing but movie theater fare for a week (spoiler alert: it does not go well) in one chapter, and in another takes six different women (only one being his wife) to the same movie (Serendipity).

Kevin Murphy’s book is markedly superior to the one written by Mr. Conniff because his insights on going to the movies will stay with you long after you’ve returned A Year at the Movies to the bookshelf.  You’ll also get pearls of wisdom like these: 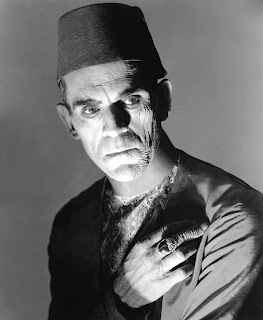 Classic movie insights: “I don’t think there’s one of us who does not see Boris Karloff as Frankenstein’s monster, or Bela Lugosi as Dracula, unless you grew up with film-school snobs for parents and you envision Max Shreck [sic] as Nosferatu/Dracula, or, if you’re still a snob, Willem Dafoe as Max Schreck as Nosferatu or if you’re simply a loser, giant-haired Gary Oldman.  And in spite of Arnold Vasloo, the Mummy still carries Karloff’s face for me.”

On IMAX: “IMAX lost a lot of dough last year, and they’ll probably lose more this year, and it may just be—not to insult anyone—because they have the coolest film format in the world and all we get to see are bears and stuff!  Even the new president of IMAX Filmed Entertainment admitted in an interview that IMAX has been famous for making three types of movies: ‘Bear movies, dolphin movies, and seal movies’.” 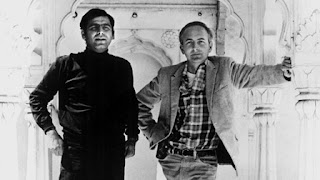 On Merchant-Ivory: “Which would explain why the Paris was packed with Merchant-Ivory groupies: women, alone, white, overread, educated, snobby.  The kind who own Robert Graves’s autograph and have had their picture taken with Peter O’Toole at a book signing for his latest memoir, Dear God, But When the Hell Will I Die?  I think it’s a good guess that the women who attend the Thursday matinee screening of a Merchant-Ivory film at a theater in the shadow of Trump Tower are not sneaking out of their office administrator jobs; rather, they have Constanza taking the kids to dance lessons, and they just nipped out for the hundred-dollar salad plate at Aqavit before Drummond dropped them off at the Paris for a show with the girls.” 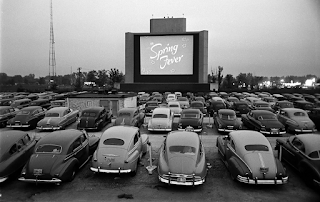 On drive-ins: “I’m hard on summer films, because I forget that people watch them simply to be distracted and sort of entertained, and since I can do this watching a ceiling fan, I bristle at paying good money.  But the drive-in cures all that.  It’s an event, a common experience, a picnic with the television on.  The admission was only three bucks and I saw four movies, so I won’t complain.  And besides, the young woman at the ticket booth looked at me and said ‘cool car,’ so already I had won the night.” 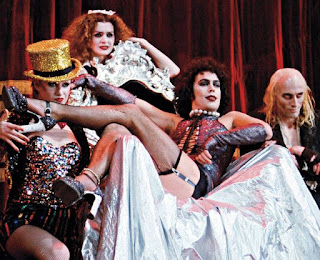 On the puzzling popularity of The Rocky Horror Picture Show (Ivan’s note: I’ve seen the movie twice.  I don’t plan on going further than that.): “I hate The Rocky Horror Picture Show.  I never, ever liked it.  I don’t like the songs—face facts, they are all essentially the same tune, over and over again.  I don’t like the characters, except for Barry Bost-wick [sic] as Brad, who, contrary to what the audience screams, is the only cast member who is not an asshole.  I can’t stand the story, what little there is of it, as it decays into the sort of high school musical dreamland one can find oneself in if one has sucked down too much amyl nitrate.” 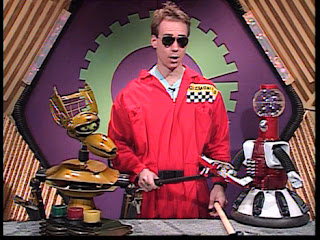 “Movies should be neither a waste of time nor a waste of money; that’s what television’s for.”  If you’re an individual who habitually attends movies the way they were meant to be seen—be it a single-screen revival house or what Murphy (and I) call “googolplexes”—I think you’ll cherish this book.  It’s filled with perceptive observations from a guy who made a damn good living hoisting a puppet over his head for nearly a decade.  (And no…I haven’t forgotten Professor Bobo, either.)
Posted by Ivan G Shreve Jr at 7:00 AM

Years back, at the turn of the century, my brother and I were being co-caregivers for our ailing mother. We'd just gotten cable, and often watched bad movies into the long night.

On one occasion, we saw one of the direct-to-video sequels to Darkman, in which Liam Neeson was succeeded by Arnold Vosloo, who is a native of the Republic of South Africa.
My brother had never seen Mr. Vosloo before, so I helpfully explained his provenance, using an admittedly outdated ethnic term:

To which I added:
"Insert your own joke here."

To which my brother shook his head and replied:
"Too easy ..."

Thanx for the shout-out.

I'm a MSTie for life, and enjoyed Kevin Murphy - his Servo was an improvement on Josh Weinstein's portrayal, plus he often displayed his beautiful tenor in several musical skits.
Rocky Horror - well, it's more of a "you had to be there" experience, having been to many midnight showings in my youth.
Joel Hodgson has been working on a crowd-funded MST3K revival, by the way.

I liked A Year at the Movies. It may, in fact, be the best book produced by a member of the show's creative team, although Movie Megacheese has its charms (and thanks, Ivan, for the kind words about Better Living Through Bad Movies -- that's the kind of brutal candor and frank honesty one rarely sees from a critic these days).

Murphy's Servo was one of my favorite characters, but had Josh Weinstein never left the show, I would have been content, since all the things I loved about Servo (sans, perhaps, the Irish tenor) were created -- at least in embryonic form -- by Josh during the early, mostly improvised, shows at Minneapolis UHF station KTMA, and the first season on the Comedy Channel.