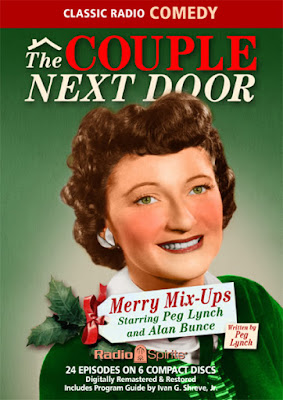 We had a most excellent response in terms of entries for the latest giveaway here at Thrilling Days of Yesteryear—a chance to win one of two copies of the Radio Spirits The Couple Next Door collection Merry Mix-Ups.  As always, I wish I could hand out a set to all that entered because as The Great One always said: “Ooooh…you’re a good group.”  Alas, I cannot…but I can pass along Mix-Ups sets to Dan M. of Washington (my sister Kat’s former stomping grounds) and to longtime TDOY supporter and proprietor of Saturday Morning Archives, Monsieur hobbyfan.  (The hobmeister also blogs at The Land of Whatever—didn’t want to leave that out.)  Congratulations to both of you, as the champagne flows freely in your respective neighborhoods in recognition of your triumphs.

The next giveaway on the blog will be after we ring in the new year of 2017 (if my schedule is accurate, it will be announced on January 7) and if you’ve friended me on Facebook you’ve received the news of what OTR collection has been submitted for prizedom.  (If you’re not into the social media phenomenon, I will give you a hint: it involves a ventriloquist’s dummy.)  So keep an eye out for the announcement, and remember—Thrilling Days of Yesteryear is the phrase that pays!