There are a few TV-on-DVD releases headed this way that might be of passing interest to the TDOY faithful…but before I get to them, here’s a very super important announcement from my BBFF Stacia at She Blogged by Night:

Everyone please join me for The Camp & Cult Blogathon here at She Blogged By Night, from September 17th through the 28th!

The Camp & Cult Blogathon is just as it sounds, a blogathon featuring campy films and cult movies. These don't have to be universally-recognized camp or cult films; if you want to make a case for Gone With the Wind as camp or Citizen Kane as cult, go for it!

This is going to be a pretty laid back affair, something I hope will be a lot of fun and with minimal stress. First of all, there is no limit to how many people can post about a certain movie. If we end up with 27 entries on Eraserhead, that is super duper 100% A-OK. There will be no set schedule of posts, either. Jump in any time between September 17 and 28, with one post or more if you like, on any film you want to write about. If you have a blog that is already specializing in cult films or campy movies and have a post that just happens to go up in those 11 days, that's fine, too.

I'll be creating a special page on the blog for a master list of everyone who participates. You can either drop me an email with a link to your post or leave a comment and I'll add you. Also during those 11 days, I am hoping to post about a film a day. Hey, stop laughing! I can hear you through the computer screen, and it wounds me.

Hey, you clowns knock it off back there…Stacia’s serious about posting once a day.  (Crowd dissolves in hysterical laughter)  Well, you can’t say I didn’t try.  Thrilling Days of Yesteryear has already RSVP’d to this event, because I know that I will definitely be offering up a take on Seconds (1966)…other contributions will depend on what my workload looks like at that time (I am going to be a very busy beaver in the next month).  But I am very excited about this blogathon, and I know it will duplicate…and—dare I say?—even surpass the success of SBBN’s July 2010 blogathon...what I chose to call here at TDOY "A Piece of Shat." 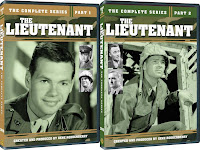 On to the not-so-smooth transition!  William Shatner’s huge TV success was the 1960s sci-fi classic Star Trek (you T.J. Hooker, Rescue 911 and Boston Legal fans just cool your jets out in the hall), created by writer-producer Gene Roddenberry…but before he put together his “Wagon Train to the stars,” the Rodster road-tested a show that featured guest star appearances from future Star Trek regulars like Leonard Nimoy and Nichelle Nichols in The Lieutenant, the 1963-64 drama which just surfaced on MOD DVD courtesy of the Warner Archive August 14th.  According to TVShowsOnDVD.com, The Lieutenant starred Gary Lockwood as “young and easy-going Marine Corps Lieutenant William Rice, who commands a colorful crew of raw recruits.  Rice soon finds his missions consist of dodging political grenades, searching to destroy dissent within the ranks, and mounting reconnaissance missions to obtain young ladies' phone numbers.”  (Yowsah!)  Long a cult favorite with fans (particularly because of the Star Trek connections), The Lieutenant’s twenty-nine episodes have been restored and are presented in two volumes (with a SRP of $39.95 each, because just putting out one set is crazy talk) that will also include, according to TSOD, “an unseen theatrical iteration.”  (Okay then.)

Another 60s sci-fi classic that’s headed for stores is the long-awaited third season (in this country) of My Favorite Martian, which MPI Home Video will release in a 5-disc (SRP: $collection just before Halloween (October 30th).  MPI’s press release that Martian’s final season is being presented on DVD “for the first time” isn’t remotely true, but I’m going to spare you a recap of the whole sordid history on that clusterfudge (I’ll just intone “Region 4” and continue to stroke my beard in a mysterious fashion) and simply say I’m pleased that the show’s final thirty-two episodes are going to be made available to fans.  (I like the cover art on the box, too—remember when shows used to announce at their beginning that they were “in color”?)

More classic comedy will come your way in October (October 2nd, to be precise) when eOne Entertainment releases The Abbott & Costello Show: The Complete First Season.  The DVD history of this cult comedy series is almost as convoluted as the aforementioned My Favorite Martian: before eOne became eOne (it was then known as Koch Industries…and if I owned a company with that name I’d probably change it, too) they released both seasons of the show on Passport Video back in 2008…a collection that was discontinued soon afterward.  eOne then released both seasons in a complete set in 2010, but for those collectors who are keeping an eye on their pennies this reissued set is just the thing in case you’re squeamish about ponying up the full tariff (TSOD’s David Lambert says the complete set has a street price tag of about fifty simolians).  Personally, since the reissued set will have a $39.98 SRP it seems to make better sense to go ahead and get the whole enchilada up front…but I’m only a simple country blogger, so what do I know? 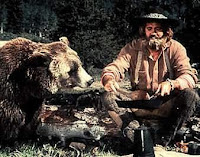 In 1974, a movie based on a 1972 novel by Charles E. Seiller, Jr was released to fairly healthy box office returns by independent studio Sun International entitled The Life and Times of Grizzly Adams (with a screenplay by TDOY OTR idol Lawrence Dobkin!).  It starred Dan Haggerty as a mountain man named James Capen Adams (nicknamed “Grizzly” because it had been a while since he had a bath he owned a pet bear named Ben) who became a local legend due to his trapping and woodsman exploits.  The success of the film spawned a TV version in 1977—the backstory was expanded to where it was explained that Grizzly was forced into his life of solitude after being accused of a crime he didn’t commit, making him sort of a mountain man version of The Fugitive—and not only had Haggerty reprising his role, but featured supporting performances from future Dukes of Hazzard player Denver Pyle (as Mad Jack) and Don Shanks as his Indian friend, Nakoma.  The show only lasted two seasons on NBC from 1977-78—something that always puzzled me because I know it was a favorite with the Little House on the Prairie crowd (namely, my sister Kat); they did manage to put a capper on the saga with a 1982 TV-movie entitled The Capture of Grizzly Adams.

The show was viewed in my house but I never paid much attention to it because I couldn’t quite figure out how Adams could tell a young visitor that he would “never hurt no livin’ thing” while he had a big pot of stew cooking on the fire behind him (he could have been a vegetarian—it’s really not my place to say).  But fans of the series will be interested to learn that the first season of the short-lived show is headed to DVD this November 6th, courtesy of Timeless Media Video/Shout! Factory.  The collection will be a 4-disc set (with a $29.93 SRP) containing the first thirteen episodes of The Life and Times of Grizzly Adams (there were thirty-eight episodes in all, including a pair of ninety-minute installments that aired during the second season).  Again—not my particular cup of Orange Pekoe, but it’s nice to see it made available for the fans out there. 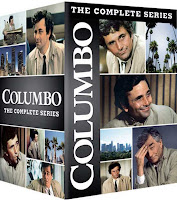 The second season of The Rookies came to DVD this past August 7 courtesy of CBS DVD-Paramount, and the six-disc set contained all twenty-three episodes of the show’s sophomore year as well as the original pilot for the series.  If you’re curious as to why they didn’t stick this on the first season set, TSOD has the answer here.  Finally, the website heralds the arrival of Columbo: The Complete Series to DVD come October 16th; the thirty-four disc set will contain all sixty-nine episodes of the regular series and the twenty-four movies that followed in its wake (priced at $149.98 SRP).  What Universal Home Video has basically done is bundle the previous 10 sets into one honkin’ big collection—but the thirty-one discs of those sets will now be thirty-four because they’ve eliminated the double-sided DVDs from the earlier collections.  (I’m sure those of you who painstakingly collected all the previous releases are pleased to hear that.)
Posted by Ivan G Shreve Jr at 2:30 PM

Hey, thanks for the shout-out!

I'm still kind of WOAH DUDE about the new banner. I like it, but I was also so used to staring at the details of the old one as the page loaded that the new banner threw me for a bit.

I hate to seem like I only come here to nitpick (big fan, love the blog, come here often), but it's NICHELLE, not "Michelle," Nichols.

I hate to seem like I only come here to nitpick (big fan, love the blog, come here often), but it's NICHELLE, not "Michelle," Nichols.

Argh! Darn self-correcting spell check feature (I type this stuff out in Word and then cut-and-paste the finished project to Blogger)...duty noted and corrected, thanks!