And I thought I knew classic movies! 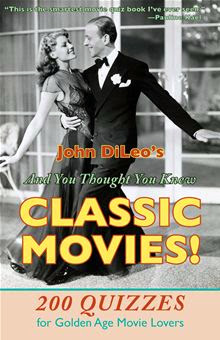 In 1999, my good friend John DiLeo published a book entitled And You Thought You Knew Classic Movies—an entertaining tome packed with quizzes on the subject of classic film, with plenty of esoteric queries that were guaranteed to trip up even the most devoted -phile.  No less a movie authority than the late Pauline Kael gushed (and rightly so) with praise for John’s work, calling it “the smartest quiz book I’ve ever seen.”

The book has been OOP for a good many years, but has recently been reissued (with a bit of additional tweaking and additions) through Hansen Publishing, and they were nice enough to send me a promotional freebie.  In fact, when John e-mailed me to ask if I’d mention it on the blog in exchange for a gratis copy I asked him if this was the same one for which Madame Kael had so much praise.

He e-mailed me back and confirmed my query, adding that Kael’s rave was “the gift that keeps on giving.”  While I’m sure Pauline and I would probably clash over our taste in movies, I’d like to think that we’d bond over our mutual approval for John’s book.  It is one of the smartest movie quiz books out there, and many of the questions even flummoxed yours truly…here’s an example of some of them:

Katharine Hepburn stars in what play at the climax of Stage Door?

Can you name the classic in which a cigarette is put out in a jar of cold cream?

What star (not Alan Ladd) is the top-billed male in This Gun for Hire?

At the risk of shaming myself, I only got two out of three of these right…I won’t tell you which one I missed.  (Though I will give you a hint and just say I may have to sit down and watch Stage Door again one of these nights after the ‘rents are sleeping soundly from the sedagive.)

And You Thought You Knew Classic Movies contains 200 quizzes, all covering a variety of different vintage film areas…and while I’ve not had time to take them all, I believe more than a few of them would even baffle the Oracle himself, Robert "Bobby Osbo" Osborne.  (I’ll just wait for the lightning to subside.)  There’s a scoring system in the back of the book that made me laugh out loud with the description for those folks only able to score 0-250 points: “’Sorry, Wrong Number’ – It’s okay to admit that the only pre-1970 movies you really care about are The Wizard of Oz and It’s a Wonderful Life.”  (On the other hand, I hear Entertainment Weakly Weekly is hiring.)

I’ve been a big fan of John’s writing since November 2008, when I found a mention of his book Screen Savers: 40 Remarkable Movies Awaiting Rediscovery on cocktail king Vince Keenan’s weblog.  I quickly added it and another DiLeo book, 100 Great Film Performances You Should Remember – But Probably Don’t, to my Amazon.com wish list…where loyal sister Debbie located them and gifted me with copies for that following Christmas.  100 Great Film Performances is the only one of John’s books not published through Hansen, but it is one I would recommend without hesitation—it’s very similar to the content in Danny Peary’s Alternate Oscars, and both are necessary tonics to anyone disgruntled by the outcome of the various Academy Awards presentations year after year.

Screen Savers is my favorite of John’s books; I have always argued that the mark of a great critic is to write about a movie in such a fashion that s/he makes you want to take a second look at it to see if there might possibly be something you missed the first time.  There are plenty of those movies in Screen Savers, and well-written essays on longtime Thrilling Days of Yesteryear favorites, too—The Killing, Pretty Poison, Stars in My Crown and many, many more.  The success of that book led DiLeo to publish a sequel last year, Screen Savers II: My Grab Bag of Classic Movies—which contains more flicks awaiting rediscovery, tidbits and essays written about classic films (culled from John’s blog, Screen Savers Movies), and a few more brain busters in the area of the same kind of quizzes featured in And You Thought You Knew Classic Movies. 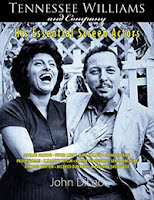 Tennessee Williams devotees will also clutch to their bosom (well, I had to get a little sex into this review) a book written by John and published in 2010: Tennessee Williams and Company: His Essential Screen Actors.  The publication is crammed with the kind of movie writing DiLeo does best; examining those actors who gave career-defining performances in vehicles based on the famed playwright’s works, like Marlon Brando and Elizabeth Taylor.  You can find more information on John’s publications and what he does when he’s not writing good books at his website here.

If you’re a classic film fan—and you must be, otherwise you’d be poring over a blog about air-conditioning repair—not buying And You Thought You Knew Classic Movies means you’d be missing out on a really splendid book, written by a tried-and-true movie fan who knows his subject and knows it bloody well.  What you should do is buy a copy for a friend, allowing them to catch up with you on classic movie knowledge and alienating you with their know-it-all….well, on second thought…buy an extra copy for yourself, and that way your friendship will stand the test of time.

Gosh those books sound good...I already placed orders for both "Screen Savers". I love pushing unknown film gems on other people too, so I'd like to see what John DiLeo's choices are. Thanks for sharing these titles with us!

The quiz book sounds great. But I only knew the answer to the "This Gun for Hire" question, though I should've gotten all three! This does not bode well for my success for the rest of the book! LOL

This book sounds like a must-have. Sadly, I didn't know the answers to any of these questions... See? This is why I need the book.