“If Frank Fay were acid, he would have consumed himself.” – Fred Allen 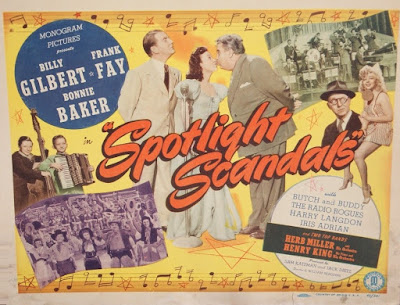 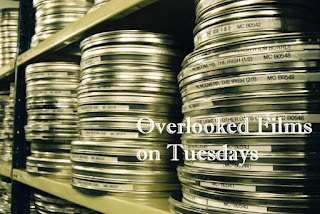 Comedian Frank Fay holds a special place in the history of show business mirth as one of the first “master of ceremonies,” or “emcees.”  As such, he could also be considered the first stand-up comedian, as posited by Kliph Nesteroff, author of The Comedians: Drunks, Thieves, Scoundrels, and the History of American Comedy:

For several years vaudeville used only painted signs with the name of each act to announce who was coming to the stage.  Fay changed this common practice, becoming one of the first people to actually emcee a show.  His role as an introducer and extroducer was another revolutionary shift in stand-up.  He wasn’t just introducing, but entertaining as he did so.  If the previous act bombed, he warmed the crowd back up, and if the momentum was good, he just kept the show going.

Fay enjoyed his greatest success in vaudeville and on stage, and while his performances were well received by audiences, offstage he was despised by his contemporaries.  (In his book on The Jack Benny Show, Milt Josefsberg related that Frank Fay was one of the few people his boss didn’t like…and Jack was on good terms with pretty much everybody.)  Much of this had to do with the man’s colossal conceit; I used a Fred Allen quote as the header for this post, but my comedy idol also had occasion to crack: “The last time I saw Frank Fay he was walking down Lover’s Lane holding his own hand.”  Benny wasn’t a fan because he detested Fay’s refusal to update much of his material (he bristled at Frank’s attitude of “You people are lucky enough to see the great Frank Fay no matter what I do”) and because of the inexcusable physical abuse he administered to his one-time wife Barbara Stanwyck (Jack and Babs were great pals).  (The old joke went: “Who is the actor with the biggest prick in Hollywood?”  “Barbara Stanwyck.”)

Fay was also an unrepentant anti-Semite, whose longtime feud with Milton Berle even got physical, with Uncle Miltie introducing Frank’s face to the business end of a stage brace (ripping his nose apart) one night during a performance after Fay commanded the stagehands: “Get that little Jew bastard out of the wings!”  The irony of this is that both Fay and Berle’s comedic styles were quite similar, that of the cocky, self-assured smartass (Fay also influenced such comedians as Bob Hope, Jack Paar...and surprisingly enough, Jack Benny) …and though comics were inclined to side with Berle because of Fay’s noxious racism, “[i]n actual fact Fay was much better than Berle,” comedian Will Jordan recalled.  “When they went onstage Frank Fay would just cut him to pieces.”  (Milton once challenged his rival to “a battle of wits,” prompting Frank to retort: “I never attack an unarmed man.”) 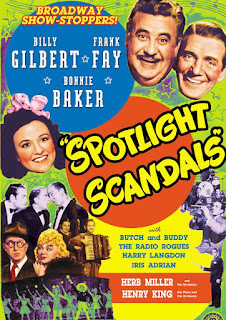 Knowing what I know about Frank Fay—and I apologize for the negativity in the beginning of this review, but there’s no getting around the fact that Frank was a first-class wanker—I was pleasantly surprised by Spotlight Scandals (1943), a B-musical comedy from Poverty Row king Monogram that’s been made available on DVD from Alpha Video Classics (many thanks to Brian Krey for providing the screener).  Fay plays himself (that is, his character is named “Frank Fay” …though the movie is not meant to be autobiographical), a vaudeville headliner stranded in a small Midwestern town who resorts to conning barber Billy Gilbert (as “Billy Gilbert”) out of a sawbuck to keep body and soul together.  He’s later invited to Gilbert’s home for a free feed and an impromptu concert by his host, who harbors an ambition to be an entertainer.  Hearing that Billy has socked away a great deal of money to achieve his dreams, Frank easily persuades him that New York is the place to be. 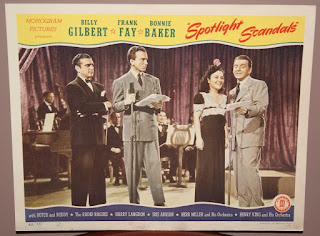 As Billy performs for agent John Blondell (James Hope), Frank punctuates Gilbert’s song with witticisms…which impresses Blondell to the point where he tells the two men he can get them work as a double act (at $300 a week).  They succeed admirably in vaudeville (considering vaudeville was on life support at the time), and eventually land a Broadway show entitled Spotlight Revue, financed by the eccentric Oscar Martin (Harry Langdon).  The team of Fay and Gilbert are the toast of the town, and one night their show finds vocalist Bonnie Baker (also playing a character named after herself) in attendance—Bonnie is a nightclub performer, but she’s also the star of a radio program sponsored by the bubble gum company run by her mother (Betty Blythe).  Bonnie wants Frank to join her radio show…but only Frank—Billy need not apply.  (I found this interesting in that both Baker and Fay had previously worked in the aural medium—Bonnie with Your Hit Parade, and Frank headlining a NBC show for Tums in the 1941-42 season.) Not wanting to deprive his partner of a wonderful opportunity (despite their success, Fay spends money like the government and is always broke), Gilbert tells Frank after their show closes that he wants to leave the act. 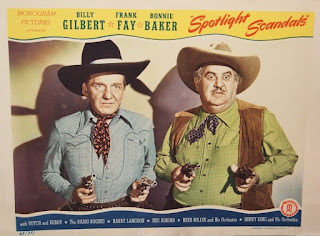 Spotlight Scandals amused me from the opening credits, since despite Frank Fay’s show business standing it’s Billy Gilbert who receives top billing.  Billy is a real favorite here at Rancho Yesteryear, a remarkable talent who worked as second banana alongside many of the great comedians: Laurel & Hardy (The Music Box), Charlie Chaplin (The Great Dictator), Buster Keaton (on live TV), W.C. Fields (Million Dollar Legs), The Marx Brothers (A Night at the Opera), Charley Chase, Thelma Todd & ZaSu Pitts (Asleep in the Feet), Our Gang, Olsen & Johnson (Crazy House) and many more.  (I sat down the other night with my favorite Wheeler & Woolsey film, Cockeyed Cavaliers…and Billy’s in that one, too.)  Gilbert also stole the show in features like Destry Rides Again (1939) and His Girl Friday (1940—a riot as “Joe Pettibone”) and his patented comic sneezing routine was borrowed to voice “Sneezy” in the Walt Disney feature Snow White and the Seven Dwarfs (1937).  As a Gilbert devotee, I don’t mind telling you he’s the reason why I was so eager to sit down with Spotlight. 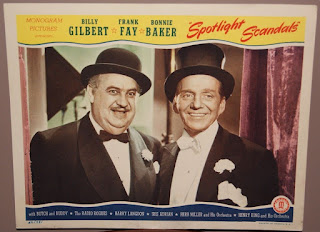 Fay then explains to Gilbert that he is not like Sally Rand since he dances without the fans—Billy: “Well…you’re liable to get arrested…”  Because Spotlight takes a surprising melodramatic turn towards its conclusion (I'll keep mum about the details), Billy is required to shift gears and place an emphasis on dramatic acting…and to be honest, he’s a bit better at making the switch than his partner.

What I found so funny about Fay’s performance in Spotlight Scandals is that Frank seems to have come to terms with his reputation for being a conceited jerk and decides to roll with it, fully embracing his inner ham while making a concerted effort to show some decency in his tight friendship with Billy.  I kind of wish that screenwriters Beryl Sachs and William X. Crowley (a pseudonym for B-movie god William Beaudine, who directed the film) had continued to concentrate on the Billy-Frank partnership because once the focus swings toward the romance between Fay and Bonnie Baker the film loses a bit of its momentum.  Baker was often billed as “Wee” Bonnie Baker (mostly due to her 4’11” height, but also because of her little girl voice) and as the vocalist with Orrin Tucker’s musical aggregation had chart hits like Stop! It’s Wonderful and Billy.  (Her biggest hit, Oh Johnny, Oh Johnny, Oh! reached the #2 position on Billboard’s charts in 1939—Baker performs a few bars of this in the film.)  Bonnie gets the lion’s share of the musical numbers in Spotlight (Goodnight, Now, The Lilac Tree) but I’ll come clean and admit I’m not a fan (her “little girl” novelty warbling gets old very quickly, and the rivalry she has with Iris Adrian over “Faysie” is most unconvincing). 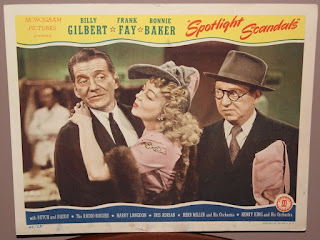 Jimmy Hollywood, Eddie Bartell, and Sydney Chatton were collectively known as The Radio Rogues and the trio plied their talent for mimicry in movies like Hollywood Hotel (1937) and Reveille with Beverly (1943).  They imitate luminaries like Peter Lorre, Red Skelton, and Jimmy Durante as one of the highlights of Spotlight—they’re Baker’s supporting act in a nightclub sequence.  Harry Langdon is good as always (if underused), and I always enjoy having character great Iris Adrian around…even if I couldn’t quite figure out why she’d ever entertain thoughts of throwing Harry over for Frank Fay.  You might also recognize the kids portraying Gilbert’s young sons (though they’ve sprouted up like weeds) as Billy “Butch” Lenhart and Kenneth “Buddy” Brown—the two moppets who make an enemy of The Great Man himself in Never Give a Sucker an Even Break (1941).  Spotlight was co-produced by none other than “Jungle” Sam Katzman—who demonstrates how to promote Monogram’s product by having director Beaudine insert a quick shot of a poster for Bowery at Midnight (1942—starring Bela Lugosi), a Katzman release, in one scene.

At the time of the film’s release, Daily Variety announced that Spotlight was the “first of the Billy Gilbert-Frank Fay series of co-starring comedy-dramas” …but I guess someone forgot to tell Frank this.  The entertainer opted out of any future romps with Billy Gilbert, prompting Monogram to embark on a short series of comedies that paired Billy with Shemp Howard and ‘Slapsie’ Maxie Rosenblum (Three of a Kind, Crazy Nights, Trouble Chasers).  Frank appeared in only one more motion picture after Spotlight, 1951’s Love Nest (I wonder if Fay’s ego took on that of Jack Paar’s in a steel-cage death match?); his movie resume was kind of spotty (God’s Gift to Women, Nothing Sacred, They Knew What They Wanted) but it mattered little—his real strength was performing on stage.  A year after the release of Spotlight he’d appear in his true triumph with the hit comedy Harvey (Frank was the original Elwood P. Dowd).

An apocryphal story relates that Frank Fay had once been called to testify as a witness in a court case and when he was asked what his occupation was he replied: “The world’s greatest comedian.”  Later, he was asked why he would risk antagonizing a jury with this lack of modesty and Fay retorted “I had to.  I was under oath.”  Spotlight Scandals is a hidden jewel of a programmer, a very entertaining quickie featuring a team that could have worked well together in future ventures had one of the members not suffered from tremendous “self-confidence.”  As a bonus, the Spotlight Scandals DVD also features an abbreviated version of the two-reel comedy Blue of the Night (1933), considered by many to be Bing Crosby’s best of the eight shorts he made for comedy king Mack Sennett.  It’s a slight but fun story, with Der Bingle stealing Marjorie “Babe” Kane away from fiancé Franklin Pangborn and appearances from Bud Jamison, Mary Treen, and Toby Wing.