Underseen and Underrated: Afraid to Talk (1932) 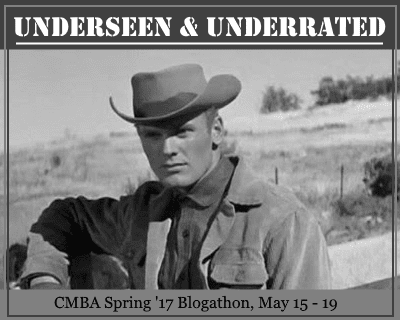 The following essay is Thrilling Days of Yesteryear’s contribution to Underseen and Underrated: The Classic Movie Blog Association’s Spring 2017 Blogathon, underway this week from May 15-19.  For a complete list of the participants and the films discussed, click here.

From May 13 to June 15 in 2016, The Museum of Modern Art hosted Universal Pictures: Restorations and Rediscoveries, 1928–1937—a collection of films from the period when that studio was run by Carl Laemmle, Jr., son of Universal founder Carl, Sr.  (Certainly, not the first nor last case of nepotism in Tinsel Town, but the younger Laemmle rarely got any respect—wags derisively referred to him as “Junior” Laemmle—and he often found himself the butt of jokey observations like “the son also rises.”)  The MoMa schedule included some movies that make the occasional rounds of The Greatest Cable Channel Known to Mankind™ (The Good Fairy, Show Boat [the 1936 version]) and some that I personally have not seen since the days when AMC literally stood for “American Movie Classics” (Air Mail).  The event was a classic movie lover’s dream come true, and one of the offerings was Afraid to Talk (1932)—which, as of this point in 2017, is the best “new” classic film I’ve seen all year.  (Afraid was also unspooled at MoMa’s To Save and Project festival in 2011.)

Racketeer Jake Stranskey (Robert Warwick) is gunned down in a Chicago hotel room…but fortunately for the Windy City police, there was a witness to the killing: bellhop Eddie Martin (Eric Linden), who is initially reluctant to finger the trigger man (snitches get stitches, you know).  Police Commissioner Garvey (Frank Sheridan) gives him the usual line of “civic duty” crap, and Eddie finally picks out Jig Skelli’s (Edward Arnold) ugly face from a mug sheet.  However, if Martin had known that a confederate of Jig’s threatened his wife Peggy (Sidney Fox) while she made her way to police headquarters to check on her spouse, he might have continued to maintain his code of omerta.

The corrupt powers-that-be—headed up by police chief Frank Hyers (Ian Maclaren), who also moonlights as one of the party bosses—reluctantly accept the fact that they’re going to have to prosecute Skelli…but they didn’t count on Jig’s ace in the hole: he found a sheath of documents on Stranskey’s corpse that detail the many payoffs collected by Mayor William “Billy” Manning (Berton Churchill), District Attorney Anderson (Tully Marshall), and other party ward heelers.  If they send him up for the murder, Skelli will make it snow with the blackmail.  Forced to let Jig skate, the PTB need a fall guy for the Stranskey hit—and choose as their patsy the bellhop who witnessed the killing in the first place.

Afraid to Talk was based on Merry-Go-Round, a controversial play written by George Sklar and future Hollywood Ten blacklistee Albert Maltz (the movie’s screenplay was adapted by Tom Reed).  When you think of hard-hitting social dramas in the films of the '30s, you usually associate that material with Warner Brothers—yet Afraid can hold its own against any film featuring the likes of Jimmy Cagney or Edward G. Robinson, and in many respects, surpasses a lot of the Warner’s product.  The amoral universe of Afraid—where everyone appears to be on the grift and honest individuals are few and far between—is most reminiscent of the brief cinematic oeuvre of writer-director Rowland Brown, responsible for such pre-Code flicks as Quick Millions (1931), Hell’s Highway (1932), and my favorite of them all, Blood Money (1933).

The Brown-like director of Afraid to Talk is Edward L. Cahn, a name usually associated with motion pictures like Creature with the Atom Brain (1955) and It! The Terror from Outer Space (1958—acknowledged as the inspiration for Alien [1979]).  Cahn began his career at Universal as an editor (his brother Philip also worked in the cutting room) and his exemplary work doing last-minute cuts on All Quiet on the Western Front (1930) got him a promotion to the director’s chair, working on crime pictures and comedies.  Before his fertile career as a director of second features in the 1950s, Ed worked as a journeyman in the MGM shorts department, notably entries in the studio’s “Crime Does Not Pay” franchise (last Friday’s CDNP on the blog, A Thrill for Thelma [1935], was directed by Cahn).  I noticed a preview of Cahn’s CDNP style in Afraid in one scene when the party bosses decide to make Chief Hyers’ soused nephew Lenny (George Meeker) the new magistrate after the only honest adjudicator (Reginald Barlow) refuses to have anything to do with the release of Skelli.  As Lenny slurs an acceptance speech, there’s a whip-pan to a bust of Abraham Lincoln, comically commenting on the absurdity of how relatives rise through the ranks of government.

Edward Arnold had a fairly prolific acting career in the silent era but his Joe Skelli is a blueprint for the later “big boss/fat cat businessman” roles he’d play throughout the talkies (The Glass Key [the 1935 version], Mr. Smith Goes to Washington, Meet John Doe), and with Louis Calhern as the contemptible assistant D.A. (who never lets his suave menace and complete lack of conscience falter for a second), the acting talent in Afraid to Talk may very well be the finest that director Cahn ever worked with.  Also on hand are Mayo Methot (the third Mrs. Humphrey Bogart) as Arnold’s moll and Matt McHugh (Frank’s bro) as his giggling brother, with silent movie villain Gustav von Seyffertitz in a heroic turn as the lawyer hired to help bellboy Martin out of his predicament.  I also got a chuckle spotting Joyce Compton and Dorothy Granger as the two “party girls” at Joe Skelli’s “get out of jail” celebration, and seeing favorites like George Chandler (as a fellow bellhop) and Arthur Housman (as a drunk—who’da thunk?). 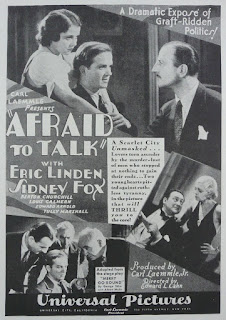 There’s a pervasively bleak atmosphere that shrouds Afraid to Talk—those individuals chosen by the people to represent them do nothing of the sort, and instead live high off the hog from graft and kickbacks, never batting an eyelash at the horrific notion of framing Eddie for a crime he didn’t commit.  (Commissioner Garvey is the only official who won’t go against his conscience, though this is provoked more by Skelli’s mob gunning down children in the streets during a heated moment in a gang war.)  It’s a riveting pre-Code picture because you’re never quite certain where it’s headed and the cynicism that runs rampant throughout (I love the Greek chorus of “bystanders” who comment on the action as they watch developments on an overhead news ticker) appeals to the disillusioned person that I have become late in life (one of the film’s most unforgettable sequences is the interrogation of Linden’s Eddie, which gradually gets physical as Calhern’s goons work him over to extract a confession).  It’s not an easy movie to track down, and though I’m a little red-faced to resort to shilling in the blogathon I obtained a very nice copy (it’s from a VHS recording—there’s a little tracking trouble at one point, but overall I was most impressed with the print) from my friend Martin Grams, Jr. at Finders Keepers.  Afraid to Talk is a fourteen-carat gem.

Wow! This sounds like a movie that would be hard to take and hard to forget. In other words (actually my late father's highest praise), "a dandy". I realize looking back that he rarely used that term for anything other than a film with a criminal plot.

Afraid to Talk sounds like it will set back my hard working attempts to combat creeping cynicism, but it is something I must see.

What a great review. Loved the description of the chorus--that's an interesting element I wouldn't expect in a film about corruption. Hope I'm able to track it down.

I caught this about five or six years ago during a festival of Pre-Code pictures at the American Cinematheque (thanks to Ivan, who looked over the schedule at my request and noted that among the offerings, Afraid To Talk was the rarest and hardest to find). It's a gutsy picture, made at a time when L.A.'s city government and police department were among the most corrupt in the country, and even though it's set in a big Eastern city (New York? I can't remember), the scenes of breezy graft and contortionistic ass-covering in the halls of power must have drawn knowing nods from local audiences.

I remember being impressed by Eric Linden's performance, which felt very naturalistic for 1932, and completely believed his ambitious, angle-working street kid (but then, that's what he was, having grown up hawking papers on Tenth Avenue), and got caught up in his tragedy.

This sounds like a film right up my alley. I am going to have to get a copy. Excellent contribution!

How fabulous the Universal restorations event must have been at MOMA! I hadn't heard of this film, but since I thoroughly enjoy most pre-codes I need to watch it soon. I will also put Blood Money on the list.

Now this sounds pretty good! You know what a soft spot I have for pre-Code movies, and besides that, I also love non-horror Universal films from this period (they seem so rare). Thanks for the gem, Ivan!

Another one added to the teetering must-see pile (if I can find it; thanks for a source!). Thanks so much for spotlighting it in this blogathon. I'm particularly interested in the Junior Laemmle period. I look forward to seeing it with the benefit of your observations...

Well done, Ivan. I've missed seeing this film (oh, for the days of the old AMC), but it sounds impressive. That particular pre-Code era of crime films sometimes produced quite astonishing work.

This sounds really intriguing, and I am always a fan of Edward Arnold and Louis Calhern. I really enjoyed your review of this film and learning about a hard-to see film I might not have heard of otherwise. Thanks!