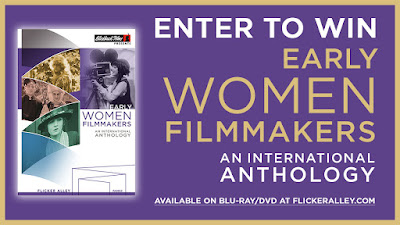 Giddy from the success of their Behind the Door (1919) contest from this past March, Flicker Alley is back in the giveaway game…and they asked Thrilling Days of Yesteryear—in addition to other respected classic movie blogs and websites—if we’d like to be a part of a contest in which the prize is a copy of Early Women Filmmakers: An International Anthology, their bodacious new Blu-ray/DVD release celebrating the innovative and groundbreaking talents of fourteen celebrated female film directors.  How could I refuse to participate in what is surely going to be one of the most talked-about classic film releases of 2017?

Did you know that more women worked in the film industry during its first two decades than at any time since?  That a woman created some of the first narrative films ever made?  Or that in 1916, the highest-paid director in Hollywood was a woman?

Despite their incredible achievements, many early women filmmakers have been largely written out of film history, their contributions undervalued. On May 9th, Flicker Alley presents Early Women Filmmakers: An International Anthology on Dual-Format Edition Blu-ray/DVD, showcasing the work of 14 of early cinema's most innovative and influential women directors, re-writing and celebrating their rightful place in film history.

Read on for your chance to win a copy! 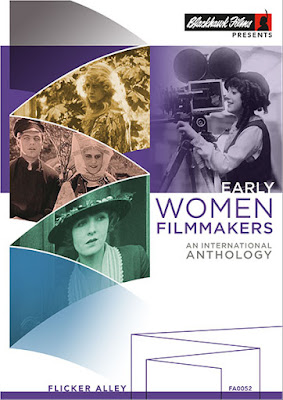 These women were technically and stylistically innovative, pushing the boundaries of narrative, aesthetics, and genre. Going back to the beginning of cinema, this collection makes visible the tremendous directorial contributions women made all around the world. Beautifully restored in high definition, Early Women Filmmakers features new scores by Sergei Dreznin, Frederick Hodges, Tamar Muskal, Judith Rosenberg, and Rodney Sauer and the Mont Alto Motion Picture Orchestra.

•             Audio Commentary: For Lois Weber’s The Blot by author, professor, and expert on women and early film culture Shelley Stamp, courtesy of Milestone Film and Video.

For a complete list of films included on the set, please visit Flicker Alley.

One lucky winner will receive a copy of Early Women Filmmakers: An International Anthology on Dual Format Edition Blu ray/DVD from Flicker Alley! Giveaway is open to residents of U.S./Canada and ends on May 22, 2017.

Watch the above trailer, comment with your thoughts, and enter to win on the form below:

Remember, members of the TDOY faithful—you cannot win if you don’t enter!  (Don’t ask me how this principle works…it just does.)  You don’t want to miss out on this fabulous prize!
Posted by Ivan G Shreve Jr at 12:00 PM

I am so glad there are so many films included in this set. It's like an early cinema school in a box.

The story of Robert Rodriguez making El Mariachi for $7000 (and thus launching a major studio career) gets bandied about quite a bit in the indie world, but none of these film school geeks -- at least, none I've talked to -- seem to know that Alice Guy basically invented narrative movies while working a day job as Leon Gaumont's secretary. So yay and huzzah for this collection; I'm in favor of anything that promotes awareness of the motion picture industry's women pioneers.

I would love to win this prize!