Much ado about Sutton 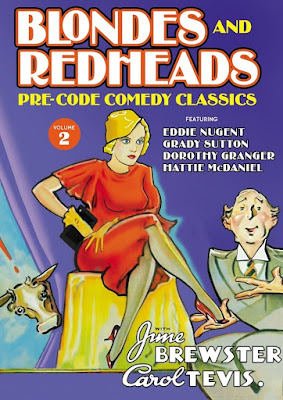 Two weeks ago in this space, I reviewed the Alpha Video release Ultra-Rare Pre-Code Comedies, Volume 2—and at the end of the post, I mentioned in passing an additional Alpha release in Blondes and Redheads: Pre-Code Comedy Classics, Volume 2, which contains four comedy two-reelers from a brief series churned out at RKO that starred June Brewster (later replaced by Dorothy Granger) as the ginger, Carol Tevis as the peroxided dame, and my main man Grady Sutton as their male sidekick (or boyfriend, depending on the situation in each short).  The “Blondes and Redheads” comedies were initiated by future Academy Award-winning director George Stevens, who had helmed a similar series at the Hal Roach Studios entitled “The Boy Friends” (Sutton was a star in those shorts, and Granger turns up in a few as well).

Alpha released a set of Blondes and Redheads shorts back in March of last year (I reviewed the set on the blog), and because it was so enjoyable I’m glad they went to the well a second time with four additional two-reel comedies.  (I only got the chance to sit down with the entire DVD Tuesday night, though I did previously watch Wig-Wag (1935), a very funny outing.)  The premiere short in this franchise, Flirting in the Park (1933), is on Volume 2, and it’s singled out by Leonard Maltin in his Selected Short Subjects book (a.k.a. The Great Movie Shorts) for effusive praise, noting that it’s not only a showcase for Sutton (the difference between the B&R series and The Boy Friends is that B&R focused more on the women than the guys) but that it’s “reminiscent of the Roach comedies in more ways than one, and with good reason:  it was directed by Stevens, written by Stevens and Fred Guiol, co-photographed by Len Powers, and it featured, in small roles, Charlie Hall and David Sharpe—all Hal Roach alumni.”  (Former Our Gang member Donald Haines also appears in Park as an office boy.)

“The other Stevens shorts in the series do not quite come up to the first one,” Maltin further observes, “but they are all extremely enjoyable comedies, and full of wonderful touches.”  I thought Flirting in the Park was a fun little romp, but I’d only slightly deviate from his praise of the short’s final slapstick sequence to opine that the strongest moments in Park appear at the beginning.  Carol and June are employed at a department store (Carol’s a salesclerk, June a switchboard operator) and there are some amusing interactions between the store’s staff and customers with the common theme of “The customer is always right!”  A man named Smith (Phil Dunham) approaches Carol’s service window, accompanied by his angry wife, to complain that he purchased some socks at the store…and when he arrived home and opened his package found women’s lingerie.  (After telling Carol this, we see that Smith has a dandy of a black eye…administered by Mrs. Smith, no doubt.)

Carol hands him another package marked Smith, and as the man opens this he explains to the better half that it was all a simple mistake…only to find more lingerie.  Mrs. Smith yanks her husband out of camera range, and when he returns he’s got another shiner to match the other one.  “You got your socks!” exclaims a giggling Carol.

“You’re the dumbest girl I ever saw!” Smith seethes in rage.  And with that, the department store’s staff arises in unison to declare “The customer is always right!” 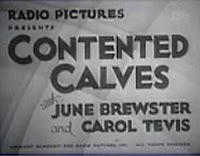 Carol’s dizziness is mined for comic fodder in another Volume 2 short, Contented Calves (1934)—an entry from Wig-Wag director Sam White.  She and June somehow manage to become models for the “No Run Hosiery” firm, and in billboards and magazine ads Carol is designated “The Dumb Bell.”  Angry, she asks boyfriend Grady—fresh out of law school—to sue the pantyhose company for “information of character”; a clever comedy bit has Grady slipping a summons to the company’s president (Charles Dow Clark) by placing it in a stack of paper towels being replenished in the dispenser by the custodial engineer (Sam McDaniel).

The rep for a rival hosiery company (Syd Saylor) offers Carol $5,000 to maintain a restraining order she’s had Grady put on the “No Run” company just as she’s been asked by the “No Run” execs to visit with them to mediate the matter.  There’s a bidding war over the order (Saylor keeps holding up fingers to Carol outside an office window), but Carol eventually tells the “No Run” executives she’s not interested in money—all she wants is an apology!  (She’s not completely dumb—she manages to wangle a job for beau Grady as well.)  Contented Calves (a little Carnation Milk pun) is the weakest of the four shorts on Volume 2, but there are still some very amusing moments (and appearances from TDOY faves Jack Rice and Bud Jamison). 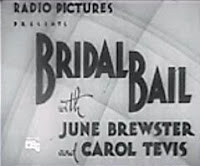 My favorite B&R comedy on this DVD is Bridal Bail (1934), the second short in the brief series (also directed by Stevens).  June and Carol are sisters, and their mother (Edgar Kennedy mother-in-law Dot Farley) is insisting that June tie the knot with loutish policeman Gus Brown (Matt McHugh—Frank’s brother).  But June’s true love is Charlie (George J. Lewis), and Charlie’s pal Grady has been inspired by a movie theatre’s newspaper ad offering a C-note to any couple who’ll get married in the presence of an audience.  (I’m guessing, what—they didn’t have any dishes to give away that week?)

Charlie and June’s nuptials are interrupted when they’re picked up by the gendarmes for speeding (they thought the motorcycle cop they were trying to outrun was Gus) with Charlie being held until they can come up with fifty bucks for his bail.  (Carol tries to sweettalk the desk sergeant [Frank O’Connor] into letting Charlie go…and she winds up in the calaboose as well.)  So, Grady and June head off to the theatre to try and convince the manager to let them have the $100 on account…but when they get there, they learn that the theatre crowd is so irate at being cheated out of a wedding that they’re dragooned into getting manacled to one another.  (They figure no biggie—they’ll head across the border for a quickie divorce and that will be that.)

Grady and June’s attempts to “untie the knot” get more and more complicated when Charlie and Carol crash out…and Grady and June go to hilarious lengths to keep their marriage a secret while waiting for the judge (Sam Appel) to make the divorce official.  Bridal Bail is a fitfully funny farce, with appearances from Roach alumni Charlie Hall and Arthur Housman (the silver screen inebriate features in a running gag in which his attempts to make martinis are constantly interrupted by the other cast members) and solid direction by Stevens.  (Future director Jean Yarborough co-wrote the script for this one…and if that movie usher looks familiar, it’s because it’s future B-western star Don “Red” Barry.)  Fans of two-reel comedies will love this second release of “Blondes and Redheads” comedies—I highly recommend it.
Posted by Ivan G Shreve Jr at 7:00 AM

If "No Run Hosiery" had been a "pantyhose company," one would suspect its owners had access to an early version of Doc Brown's time machine. (Perhaps its car was not a DeLorean, but a (1934 Chrysler Airflow.) Pantyhose weren't invented for another quarter-century (http://www.smithsonianmag.com/arts-culture/50-years-of-pantyhose-33062523/), although IIRC that hosiery concept also was used for a time-travel gag in the Kathleen Turner comedy "Peggy Sue Got Married."