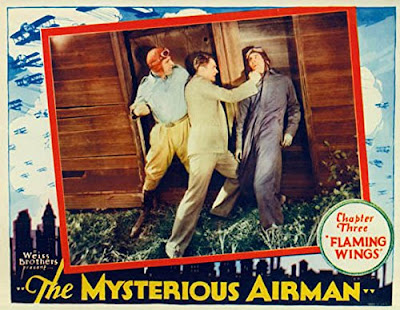 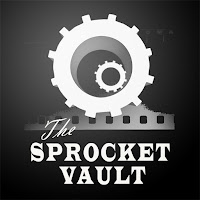 In the history of the motion picture industry, the term “state’s rights” was used to describe many of the independent movie companies; these outfits would sell their releases to local/regional film exchanges for a predetermined price, and outside of the major studios or national theatre franchises, it was often the best way for an independent to make certain their movies were seen throughout the country.  There were a buttload of these companies in operation since the dawn of cinema, and one of the most prolific (and profitable) was Weiss Brothers/Artclass Pictures, which began producing motion pictures in 1915.  (The Weiss bros were a trio—Adolph, Max, and Louie; Louie was Vice-President in charge of production, so he handled most of the creative end.) 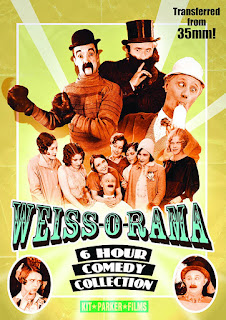 The first Weiss Bros. release was It May Be Your Daughter (1916), an exploitation film that dealt with white slavery, and from that inauspicious beginning the company would produce feature films, short subjects, and serials up until the late 1930s.  (The company kept chugging along in various incarnations until 1984; film historian/friend of the blog Richard M. Roberts notes that “Weiss-Global Enterprises” lasted longer than MGM!  I remember seeing the Weiss-Global logo at the end of several of the late-night sitcoms I watched on CBN back in the 1980s.)  I became familiar with the Brothers Weiss’ contributions to the art of the two-reel comedy when Kit Parker Films/VCI released Weiss-O-Rama to DVD in 2007—a collection of shorts featuring the likes of Ben Turpin, ‘Snub’ Pollard, and Poodles Hannaford.  (I think the review I wrote was at the blog’s former Salon Blogs home, now blown to smithereenies.  The collection is still available, I hasten to add, through The Sprocket Vault and Amazon.)  I was not, however, well-acquainted with any of their cliffhanger serials…but that situation was rectified last week when Kit Parker sent me a screener for The Mysterious Airman (1928)—a Super Chapter Play of the Air! 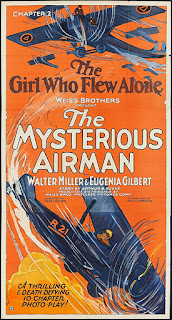 James Joyce (Chris Allen)—not the author of Ulysses, by the way—is an inventor who’s designed a device known as the Aerometer, “which minimizes the danger of flying in fog and storm and makes night aviation practicable.”  Aviation companies would quite naturally give their eyeteeth for such an invention, but it’s Baker Aircraft who’s the beneficiary of Joyce’s hard work…and I’m almost positive that it’s not because the firm’s president, Frank Baker (Walter Miller), is the fiancé of the inventor’s daughter Shirley (Eugenia Gilbert).  Baker’s use of the Aerometer has made his company the target of a series of attacks on his planes by “a daring band of mysterious airmen,” under the supervision of a secretive masked aviator known only as “Pilot X.”  (Please…let’s not have any Speed Racer jokes in the audience.)

Who is “Pilot X”?  The Mysterious Airman has no shortage of suspects—it could be Barney Madden (James Fitzgerald), a loyal pilot at Baker Aircraft.  Or Albert Orren (Eugene Burr), the company’s superintendent and stockholder.  It could be forces outside the outfit—like competitor William Craft (Robert Walker), general manager of Globe Air, or Craft’s girlfriend Fawn Nesbit (Dorothy Talcott), “an aviatrix who seeks the fame as the first woman round-the-world flier.”  (Until I looked it up, I thought “aviatrix” was a wingless bird with hairy feathers…and then I remembered that’s an “apteryx”—from the comic strip B.C.)  There’s even Perkins (Arthur Morrison), a sinister butler who always seems to be in the vicinity (arranging flowers) whenever serious matters are being discussed and…nah, he’s a little too obvious.  All is revealed after ten exciting chapters of this “thrilling and death defying” photo-play, according to the serial’s promotional art. 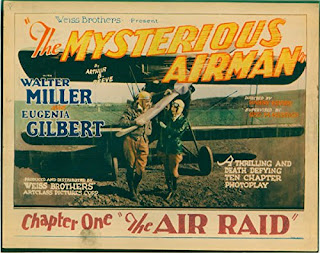 The Mysterious Airman was the last silent serial to emerge from the Weiss Brothers’ film factory, and one of the final chapter plays from the silent era in general.  Its resurrection through Kit Parker Films and The Sprocket Vault is a marvel to classic movie fans, because while it’s not impossible it is a rarity for serials from that time to have survived intact.  (And even Airman has a small blemish—the first reel of Chapter 9, “The Hidden Hangar,” is lost to decomposition.)  Film archivist Jeff Joseph is the individual who should sit in the middle chair at the celebratory dais, supplying an original (and tinted) 35mm nitrate print that looks positively amazing, even when you consider that this was a projection print (so it ran through a projector more than a few times) and that there is some occasional mottling with regards to the tinting.  (Overall, it looks damn good for an 89-year-old production.)

Richard M. Roberts contributes a fascinating commentary track for Airman’s DVD presentation—and I mean throughout the entire serial; we’re talking 190 minutes non-stop, and so does he.  (Roberts even has a little fun when it comes to the serial’s missing reel, pretending his commentary for that reel vanished, too.)  An author and movie historian to whom I am most grateful for keeping me honest when there’s a glaring error on the blog, Rich illustrates in meticulous detail the history of Weiss Brothers-Artclass (identifying it as one of the most important “Poverty Row” factories) and filling out background on the movie’s main players, Miller and Gilbert (I’ve seen Gilbert in shorts with Harry Langdon and Charley Chase, so it was nice to get the additional skinny), as well as the supporting cast, director Harry Revier, and basically everyone involved in the production (and those who enjoyed a long association with the Weiss Brothers—because despite their low-budget moviemaking, they were most generous and loyal to their employees).

If you’ve been scratching your head at the title for this post…it’s because at one point in this stirring saga, a monkey is employed to spy on activities at Baker Aircraft, prompting Richard to utter that phrase when the chimp makes a return appearance in a later chapter.  (Richard eventually settles on “henchmanzee.”)  I enjoy his commentaries because of moments like this (in one chapter, as the Frank Baker character is being held hostage in a barn, Roberts notes that the structure is liable to collapse before he can escape), and because I share with Richard the belief that movies should be a fun and entertaining experience (he has a disdain for those people who rhapsodize over classics like Napoleon and The Passion of Joan of Arc, because it’s productions like Mysterious Airman that made sure there was dinner on the table every night—there’s a reason why “business” is in the phrase “movie business”).  Roberts also takes special pains to let the viewer know that “no airplanes were harmed in the making of this serial.”  (It’s true; they just didn’t have the money in the budget for real plane crashes, so they had to improvise with cardboard models and scratches on the film emulsion—and yet they make it work.)

Truth be told, I ran Mysterious Airman a second time just so I could enjoy the score by Dr. Andrew Simpson—the main accompanist at Culpepper, VA Packard Campus of the Library of Congress.  Honestly, this is a DVD that goes above and beyond in its presentation, with bonus material spotlighting original posters and lobby cards…and a two-reel short from 1928 entitled Flying Cadets, featuring extensive aviation footage shot at Brooks Field in Texas.  (I didn’t see it mentioned at the [always reliable] IMDb; Rich told me in an e-mail that he believes the Kodascope release originated with the Army or some governmental outfit.)  Members of the TDOY faithful know that two of my classic film passions are silent movies and serials, and because The Mysterious Airman is literally the best of both worlds I won’t hesitate to recommend this DVD to like-minded individuals.  (It's available exclusively at Amazon; Ivan Bob says check it out!)