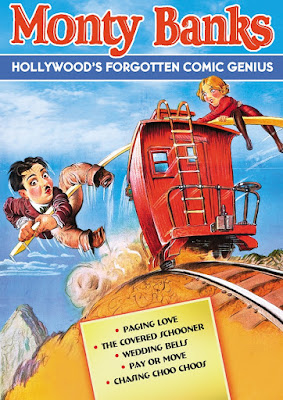 You know the famous quote from John Ford’s The Man Who Shot Liberty Valance (1962): “When the legend becomes fact, print the legend.”  The legend goes that up-and-coming movie mirthmaker Mario Bianchi was inspired to adopt the nom de screen of “Monty Banks” (also spelled “Monte Banks”) when the legendary Roscoe “Fatty” Arbuckle, his employer, told him in 1917: “You can't play another 'montebank' [mountebank] with a difficult name like Bianchi!”  It makes for an amusing story…except that in a 1918 two-reeler, The Geezer of Berlin, “Banks” was still billed as “Bianchi.”  What we can be certain of is that despite his popularity in the 1920s as a comedy star in various shorts and features, Monte’s mostly remembered today (if at all) as the husband of British entertainer Gracie Fields (he directed her in four feature films during the 1930s).

Banks’ enduring contribution to silent comedy is featured in the Robert Youngson compilation Days of Thrills and Laughter (1961): the laugh-a-minute, thrill-a-second, runaway train climax from his 1927 feature Play Safe.  This sequence was later recycled for a two-reeler released that same year entitled Chasing Choo Choos (Play Safe didn’t do well at the box office)—and this engaging short is one of five comedies featured on a new DVD release from Alpha Video, Monty Banks: Hollywood’s Forgotten Comic Genius.  Choo Choos is an entertaining cutdown (the eye-popping stunt work is courtesy of Harvey Parry), though to be honest I think you’re better off watching this material in Thrills and Laughter…only because that movie concentrates on nothing but the chase, whereas Choo Choos contains a little bit of the backstory that might be confusing if you’re not familiar with the plot of the full feature.

The wonderful thing about Forgotten Comic Genius is that Chasing Choo Choos isn’t even the strongest short on the DVD; I really enjoyed Wedding Bells (1924), in which Monty plays a would-be groom who must deal with his jealous bride (Ena Gregory) the morning after his wild bachelor party.  Monty doesn’t know that his neighbor (William Blaisdell) from across the hall is babysitting his fiancée’s dog (she won’t marry him unless she’s certain the dog is properly looked after), and Neighbor has smuggled the mutt into Monty’s crib out of sight of the landlady (Louise Carver).  Ena thinks that Monty’s playing around, and refuses to do the matrimonial sashay down the aisle unless Fido is outta there.  So Monty hilariously attempts to shed himself of his new pet, with hilarious results…and then when Ena gets everything straightened out with the neighbor, Monty must get the dog back.  The gags in Wedding Bells are clever and the denouement is hilarious (I did see this one coming, I must confess), making the overall effort a most delightful two-reeler.

Pay or Move (1924) is also a gem; Monty must protect the father of his girlfriend (Gregory again) from a sinister outfit known as the Koo Koo Kans (my, that’s subtle)—even though he’s in Dutch with the old man because he’s in arrears where his rent is concerned (Papa is his landlord).  There are good gags in this one, but what makes them so engaging is that Monty’s character is shown to be a very resourceful individual (he’s able to fool a couple of goons with some mannequins dressed in police uniforms).  The Covered Schooner (1923—directed by Harry Edwards; the title is a jokey reference to The Covered Wagon) is just a slight slip in quality, mostly because it starts out strong (Monty’s a florist who’s trying to close shop so that he can rescue his girl (Lois Boyd) from the amorous clutches of Captain Blaisdell) but peters out in the second half (Monty gets shanghaied aboard Blaisdell’s ship).  (Though one gag did make me snort out loud: for some odd reason, there’s a gorilla among Blaisdell’s cargo [and not a particularly convincing one], and Blaisdell and his crew decide to throw Monty into the cage where the animal is certain to make quick work of him.  Then they look inside…and both Monty and the gorilla are on the floor of the cage, shooting craps.)

The weakest short on Forgotten Comic Genius is Paging Love (1923)—fortunately it’s also the first short, so it’s kind of like eating your vegetables before you get to the dessert—and really, it wouldn’t have been that bad if someone had just considered making a one-reeler out of the material (the plot in this one, in which Monty must sell a copy of his prospective father-in-law’s [busy Blaisdell] encyclopedia to win his daughter’s [Boyd again] hand, is painfully thin).  (The last five minutes has Banks channeling his inner Harold Lloyd when the shenanigans go “high and dizzy.”)  All five of these comedies come from the collection of my Facebook chum John Carpenter (a.k.a. “The Movie Man”), whose participation in Alpha’s Blondes and Redheads: Lost Comedy Classics was so essential to that DVD release’s success.

As I was browsing the Internets looking for photos to illustrate this essay, I laughed out loud at some of the search results because a small group of people seem to have confused Monty Banks with Harold Peary, radio’s The Great Gildersleeve—and because I knew you’d be saying right now “Oh, come now, Ian” I grabbed this screen shot for proof:

Yes, that is misidentified at Getty Images.  I would expect something like that at eBay or even the (always reliable) IMDb…but Getty? 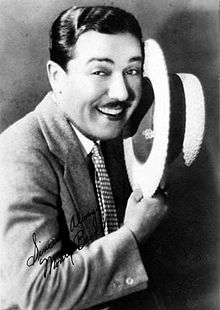 “It is almost impossible now to describe a once-popular comedian like Monty Banks by speaking of his mannerisms; he doesn't seem to have any,” observed Walter Kerr in The Silent Clowns.  “He is short, on the plump side, possessed of a miniature mustache that would seem suave on a head waiter but it is somehow a badge of apprehension on him.  He is likeable.”  Kerr goes on to say that despite his extensive comedy training Banks rode out his career in silents emulating Harold Lloyd (while taking special pains to ensure that the “thrills” in those features steered close of trickery).  “The stunting is impeccable, worth keeping in film anthologies; but we cannot quite remember the man.”  That’s why we’re fortunate to have releases like Monty Banks: Hollywood’s Forgotten Comic Genius—they do so much to make certain we don’t forget.  (Many thanks to my Alpha pal Brian Krey for the screener.)

Scott stepped into the confessional: