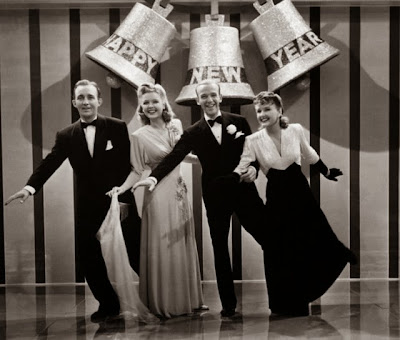 I thought it would be appropriate to squeeze in one more post before we wipe the slate clean and start a brand new year in 2014.  If you’re hoping to see a list of what was good about 2013…well, I’m going to have to disappoint you.  I didn’t see enough new or old movies this year to qualify for a Top Ten, and I’d rationalize this by saying I’ll try harder in 2014 but I’d also be fibbing.  Actually, the best Top Ten list I’ve read this year can be found at my good friend Dr. Film’s blog—a ranking of the best film preservation stories in 2013.  (Ben Model’s Accidentally Preserved collection made the list…and I’ll have some additional news and a review of the second volume in that series sometime in 2014.) 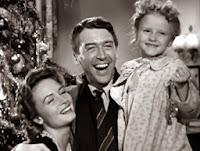 The holiday season here at Rancho Yesteryear was one of the best; my youngest sister Debbie spent Christmas with us, accompanied by her husband Craige and daughter Rachel.  There were good eats, much merriment (we had mimosas on Christmas morning—and those of you who know me well know that I am a man who likes his mimosas) and the initiation of niece Rachel into the wonderful world of classic film.  Christmas Eve Eve, I announced my intention to watch Miracle on 34th Street (a yearly tradition, of course) back in my bedroom environs while my sports junkie parents and the rest devoured football and basketball…and I asked Rachel if she would be interested in seeing it.  She told me would very much like to, and though I stressed to her before the feature presentation that this was an older movie, I apparently did not emphasize it forcefully enough because as the opening credits rolled, she cried out: “You didn’t tell me this was in black-and-white!”  But I’m happy to report that this did not deter her from enjoying the movie (she thought the scene where Kris Kringle is able to converse with the little Dutch immigrant girl “adorable”), and in fact, we watched It’s a Wonderful Life together on Christmas Eve.  I think she had seen a portion of it before, because she remembered the scene where the dancers at the high school fall into the swimming pool.  (By the way—it’s not easy explaining to your niece why you’re a sobbing mess after Life concludes.) 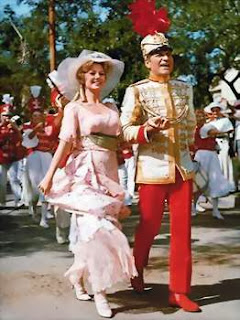 She also inquired as to whether I had The Music Man on hand—which I had recorded off The Greatest Cable Channel Known to Mankind™ a few years back, and so I spent most of Christmas Eve morning trying to locate it in my boxes o’discs.  (You won’t believe this, I know—but it was in the very last box I looked in.  It always is.)  We watched Man on Christmas night, and she loved it as well; but there is often a price to pay in schooling younger people in this sort of thing in that you have to occasionally allow yourself to sit down with something they enjoy.  I had bought her the DVD of the 2013 documentary One Direction: This is Us for Christmas, and I agreed to watch it with her on the night after Christmas.  It wasn’t bad—I think the part I enjoyed most was watching Martin Scorsese become a gushing fanboy with his granddaughters in tow—though in all honesty, I’m not the target audience for those kind of movies.  (The doc was directed by Fairmont, WV native Morgan Spurlock…whose Super Size Me documentary was a request by Rach a couple of visits back except her folks vetoed it because it’s unrated.  Rach told me that she finally got to watch it in school, in a version that made a small edit or two due to language.)

I already shared with you on the blog the news of two Christmas gifts I was going to receive: the Naked City: The Complete Series box set and the Laurel & Hardy: The Essential Collection.  These two gifts (what can I say—I have great taste) were supplemented by volumes 1 and 2 of Have Gun – Will Travel: The Sixth and Final Season, courtesy of my BBFF Stacia (what can I say—she has great taste).  In addition, both of my sisters generously sent me some Amazon gift cards…and with this largesse I was able to purchase a Blu-ray burner/player for the computer, so I have now officially made the leap into the 21st century.  (Which is scary…a cellphone might be next.)

I also want to take a moment to thank everyone who sent a Christmas card my way: I received warm holiday wishes from Brandie (and her saucy Laszlo), Laura, Bill “Get away from my outside decorations, you hooligans!” Crider, Toby, Rodney and my old Morgantown pal Kim.  But the winner for this year’s most offbeat card came courtesy of the folks from The Lightning Bug’s Lair (Zachary), Gonna Put Me in the Movies (B. Goode) and Three Makes a Collection (Peggy)—hey, the family that blogs together stays together—which I will share with you here: 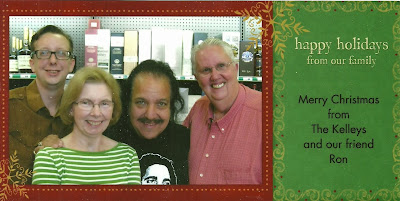 “Ron,” in case you don’t recognize him off the bat, is adult film star Ron Jeremy.  Explaining to the ‘rents who Ron was constituted high hilarity (plus they didn’t quite understand why I was rolling around on the floor laughing); I just want to say that I would trade them in for cool parents like Zach’s (Zach confessed on Facebook: “Best family picture ever!”) in a New York minute.  (Okay, I probably wouldn’t.  But don’t think for a moment I’m not envious.)

So what’s in store for Thrilling Days of Yesteryear in 2014?  Well, I have truly been making an honest effort to get more content up on the blog, and I think you’ll have to agree that this month has had the most compared to all the rest of the months in 2013.  I’m working on movie and book reviews, plus the continuation of Serial Saturdays (Riders of Death Valley will be completed soon and I’m interviewing candidates for our next presentation) and (heaven help us all) Doris Day(s).  I hope that my rewarding associations with Radio Spirits and ClassicFlix continue, too.  For everyone who stops by the blog now and then, I want to wish you all a joyous and prosperous New Year’s—now let’s hit the mimosas!  (Oh, the image on the left comes from Pretty Clever Films—who gave me a nice shout-out in April and I just now came across it.  Mea maxima culpa and thanks for the plug!)
Posted by Ivan G Shreve Jr at 3:02 PM

Wasn't I just here at the site for Doris Day? Yes, that's right ... OK, two visits in one day is my limit ... I have to say I would LOVE to have been there for your explanation to Mommy and Daddy about who Ron Jeremy is (or what he is, or what he has that makes him so popular)! Must have been a moment you will never forget! Have a good eve with plenty of mimosas!

Thanks for liking our card so much that it got a shout out in your last post of 2013. I think you enjoyed this card as much as we did and that says a lot. I think a few of our friends were a little mystified by the whole thing. Ron turned out to be very personable and likable, but probably didn't believe us, when we told him the photo was for our family Christmas card.

Ron turned out to be very personable and likable, but probably didn't believe us, when we told him the photo was for our family Christmas card.

Oh, that's just made me laugh so much harder. When I showed this to Stacia she said: "He's wearing a T-shirt with his picture on it!"

PLEASE! PLEASE! PLEASE! Do a Republic serial for your next Saturday Serial project! Maybe do one of the ones Olive is planning on releasing...FLYING DISC MAN FROM MARS or THE INVISIBLE MONSTER. Or one of the classics like DARDEVILS OF THE RED CIRCLE or MYSTERIOUS DOCTOR SATAN.

Maybe do one of the ones Olive is planning on releasing...FLYING DISC MAN FROM MARS or THE INVISIBLE MONSTER.

I really do hope Olive does do this...I've heard a lot of rumors, but nothing definite yet.

I'd tackle Red Circle or Satan...the only problem is that the majority of my serial collection is collecting dust in my father's storage shed. (I need to admit that I'm partly to blame for this; the day I moved into the apartment I simply couldn't move one more box and told him to leave the rest in storage...not knowing it would be for keeps. Don't get my mother started on that by the way; he's got her Christmas tree in there, too.)

The good news is that I picked up some chapter plays at CheezyFlicks.com before Christmas; they were on sale and Cliff at In the Balcony alerted me to a coupon, too. So I've got copies of Federal Agents vs. Underworld, Inc. (which I'm leaning toward), Government Agents vs. Phantom Legion and Manhunt of Mystery Island...which is also a candidate, except I'm not wild about doing another 15-chapter serial. If push comes to shove, I might take another look at The Black Widow...or possibly do Daredevils of the West or Drums of Fu Manchu.

"Mom, dad, he has an enormous schwanstucker. He's very popular."

B, Ivan is not lying, my immediate reaction was twofold: (a) THAT IS SO COOL and (b) he is wearing a shirt with his own face on it... WHICH IS ALSO COOL.

A wonderful 2014 to you Ivan, and all the TDoYites!

Thanks for posting that link to the preservation stories--looks fascinating. The Ron Jeremy card has to be the funniest one I've ever seen. They'll never be able to top it! There's no explaining Jeremy. To paraphrase Homer Simpson: "you just strap yourself in and feel the 'G's" Shudder.