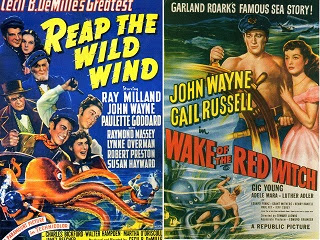 John Wayne’s star was not so high in the heavens in 1942 when he joined the cast of Reap the Wild Wind, a film perhaps more noteworthy at the time for its director, Cecil B. DeMille. Upon its initial release, co-stars Ray Milland and Paulette Goddard received billing over Wayne and Susan Hayward. 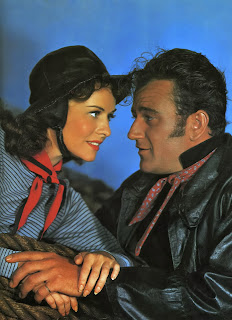 The story is set in the 1840s in/around the Caribbean. Wayne plays Capt. Jack Stuart of the Jubilee. When his ship cracks up off the coast of Key West, King Cutler (Raymond Massey) swoops in like the vulture he is to salvage whatever cargo is left and claim 50 percent of the profits. Goddard portrays Loxi Claiborne, Cutler’s competitor, who is forced to settle for Stuart.

While Stuart recuperates at her home, Loxi falls in love with him. He’s handsome and ambitious, setting his eyes set on the command of the Southern Cross, one of them new-fangled steam ships. That hope comes into question when he must journey to Charleston to face the music for losing the Jubilee.

Stuart believes the ship was destroyed through sabotage, and his chief suspect is his rival, Steve Tolliver (Milland), who is due to take over the shipping line. He comes across as a bit of a fop, complete with a lap dog he makes speak through ventriloquism; really BAD ventriloquism.

With the cloud of suspicion still hanging over him, Stuart returns with Loxi to Key West, hoping to rid the seas of the vultures preying on merchant ships. Tolliver’s also visits the Keys to assess the situation for himself. Fearing Stuart might be the man to bring his criminal enterprises to an end, King Cutler arranges to have Stuart Shanghaied. Learning of the plot, Loxi enlists Tolliver’s help to rescue Stuart. 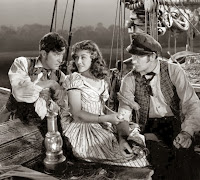 But Loxi and Stuart learn Tolliver has kept Stuart’s captaincy from him, and when the head of the shipping line dies, Stuart sees his chances for commanding the Southern Cross sinking fast. Cutler capitalizes on Stuart’s anger and frustration to convince him to sabotage the Southern Cross. Tolliver gets wind of something when prices for goods shipping on the vessel begin to fluctuate wildly. He commandeers Loxi’s ship, but believing Stuart is innocent, she disables the ship to prevent Tolliver’s interference.

Stuart follows through with his plan to scuttle the vessel, but unbeknownst to anyone aboard, Loxi’s cousin Drusilla (Susan Hayward) had stowed away, intending to join her lover, Dan Cutler (Robert Preston), King’s brother. This comes out when Stuart is put on trial. Stuart and Tolliver dive on the wreck in search of evidence, but are attacked by a giant squid. Stuart sacrifices his own life to save Tolliver.

Six years later, Wayne starred in Wake of the Red Witch, a film based on the 1946 novel by Garland Roark. Once again, he plays a sea captain in the East Indies seeking revenge against Mayrant Ruysdaal Sidneye (Luther Adler), a wealthy shipping magnate. Of course, the root of the vendetta is a woman: Angelique, played by Wayne’s co-star from Angel and the Badman (1947), Gail Russell. 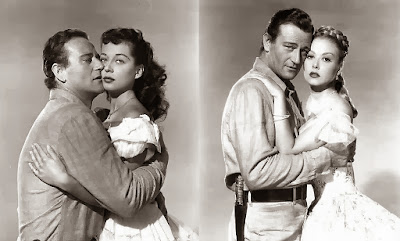 The focus of the film is the deadly rivalry between two men of the sea. Ship's captain Ralls (John Wayne) nurses a long-standing grudge against Sidneye. The reason for the animosity: a woman. 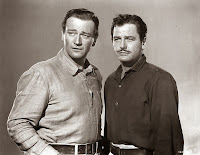 The story begins as Ralls fabricates a series of circumstances designed to bring the sanity – or at least the competence – of his navigator Mr. Loring (Jeff Corey) into question. This is so that Ralls can more easily explain how his ship, carrying $5 million in gold, managed to run aground.

However, during the inquiry that follows, First Mate Sam Rosen (Gig Young), Ripper (Paul Fix), and Capt. Ralls all provide confusing testimony, and before anything can be resolved, Sidneye withdraws his complaint. The three later set sail as fishermen, only to be sold a bogus map resulting in their capture by Harmenszoon Van Schreeven (Eduard Franz). 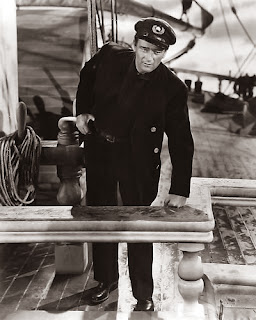 In flashback, we learn that seven years earlier, Ralls and Sidneye made a deal: Ralls would show Sidneye the location of a fortune in pearls in exchange for the captaincy of the Red Witch. However, Sidneye never held up his end of the bargain.

On the pearl island, Ralls meets Angelique (Gail Russell) and her uncle, Commissar Jacques Desaix (Henry Daniell). The locals have a challenge to retrieve a chest of pearls from the lair of an octopus. Ralls manages to rescue on challenger, winning the admiration of Angelique, but she is being pressured by her uncle to accept Sidneye's proposal of marriage.

Angered at Angelique’s betrothal to another man, Ralls dives for the pearl chest, retrieving it and slaying the octopus, though he nearly dies also. At his bedside, Angelique confesses her love for Ralls. When the local chieftain decides that Ralls has legitimately won the pearls, Desaix tries to have him arrested. 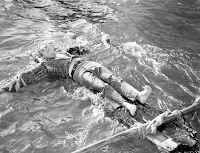 The flashback now over, Sidneye convinces Ralls to leave the island and leave Angelique behind. After she sickens and dies, he sets sail on to have his ship destroyed as it passes over a submerged gate in the bay. Sidneye believes he’s killed his rival, only to have Ralls to reappear unharmed. Ralls then agrees to dive on the Red Witch to retrieve the gold, but after loading the dive basket, he becomes trapped by debris, dying as the ship topples over an underwater cliff.

Both Reap the Wild Wind and Wake of the Red Witch share similarities: Wayne plays a sea captain, fights a giant octopus, dives on a ship he intentionally wrecked, and pays for the crime with his life. Of the two, I enjoyed Reap the Wild Wind more. I found Wake of the Red Witch rather dull and derivative, but that may be simply because I watched it second when preparing these reviews.

It’s unfair to compare the films to Wayne’s library of war and Western heroes, as hindsight is 20/20. But at the time, one can’t help but wonder he would be cast in two films with such similar story elements, other than to say it made for easy casting.

It’s nothing new in Hollywood, as actors are constantly being recycled for multiple roles that are ridiculously similar. It’s been going on since the silent era, and will continue for generations to come.
Posted by Ivan G Shreve Jr at 8:00 AM

I'll always have a great affection for WAKE OF THE RED WITCH because it's based on a novel by Garland Roark, who was from the little Texas town of Groesbeck, about 12 miles from there I grew up.