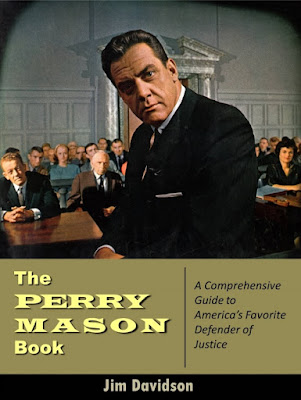 “All I wanted was a list.  Just a little bitty list of Perry Mason episodes.”  That simple task would spur author Jim Davidson to write The Perry Mason Book: A Comprehensive Guide to America’s Favorite Defender of Justice—an e-book I picked up for my Kindle a while back.  Why?  Because I love watching Perry Mason, a habit I adopted when the series was in reruns on TBS in the 1980s; it would run five minutes past the lunch hour (12:05 ET), just as I was returning home from slaving over a hot book at Armstrong State College (now Armstrong Atlantic State University).  My major was in criminal justice, and so I was understandably drawn to a classic boob tube show featuring an attorney who—with rare exceptions—won every case he argued in court.  (Also understandably—I like to watch TV while eating lunch…regardless of my major.)

The quest for an accurate list of Masonry (sorry about that) would lead Davidson to form NAAPM—the National Association for the Advancement of Perry Mason.  (“My then-girlfriend wasn’t fond of the show and refused to watch it with me,” Davidson continues in the book’s foreword.  “So I figured, ‘There must be somebody out there who’d like to watch these episodes.’”)  Jim would eventually cobble together a tally of the show’s telecasts through the CBS Program Information Department in New York…and from there sprang forth a newsletter (in the days before the World Wide Web) and interviews with many of the individuals who worked on the show—including Raymond Burr hizzownself.  Eventually, Davidson had to disband the fan club to concentrate on the book he needed to write. 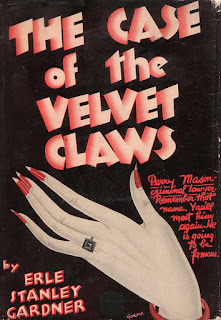 The Perry Mason Book does not take its “comprehensive guide” appellation lightly.  It begins with a history of how author Erle Stanley Gardner was inspired to create a character that has gone on to inspire many of the individuals familiar with Perry Mason (through books, movies, TV and other forms of pop culture) to become lawyers themselves—first with a thorough biography, and the events that led up to the debut Mason novel, The Case of the Velvet Claws, being published in 1933.  (All of the subsequent Mason novels and “novelettes” [short stories] are listed with painstaking detail, with lists of the characters that appear in each printed version, and as to when they were adapted as movies or episodes of the TV series.)  In addition, both Perry Mason novels written by Thomas Chastain (in 1989 and 1990) are discussed, and there’s an exhaustive list of the attorney’s appearances in magazines (many of the novels appeared in serialized form in periodicals like Liberty and The Saturday Evening Post.)

Mason fans are no doubt familiar with the film franchise produced at Warner Brothers from 1934-37 (available since 2012 on a 2-DVD collection from the Warner Archive); several of the features starred pre-Code cad Warren William as Perry.  There’s a section on these films in Davidson’s book (though the author doesn’t seem to have too high of an opinion on W.W.—sorry, Cliff).  The radio version of Perry Mason (which aired over CBS from 1943 to 1955, and later transferred to TV as the soap The Edge of Night) also receives its own chapter (I did not know that John Lund was the first actor to play Paul Drake on this daytime drama—I always associate him with being the weakest of the Johnny Dollars), not to mention the comic books (published between 1944 and 1964) and the brief Perry Mason comic strip from 1950-52 (I did not know there was one—daily and Sunday!). 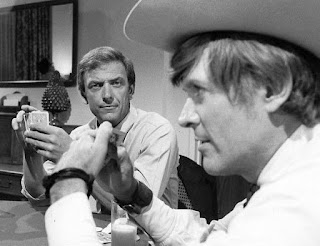 As you’ve no doubt guessed, the largest section in The Perry Mason Book centers on the popular series that aired between 1957 and 1966.  There’s a list of every single episode telecast, with enough arcane trivia (cast lists, quotes, etc.) about each installment to impress even the most jaded fan.  The attempt to revive the show in 1973-74 (The New Perry Mason) is also discussed in loving detail…or to be more accurate, non-loving detail—producer Ernie Frankel is quoted as saying: “It was just a nightmare.  It was the worst time of my life.  I’ve been through combat and it wasn’t nothing like that.  It was just awful—just awful.”  (Frankel, a story consultant for the original series between 1965 and 1966, not only appears to be sitting on the fence but later went on to produce Young Dan’l Boone…so I guess there are some lessons not easily learned.)  Supplemental material is presented in the form of mentions of the show in various pop culture outlets, including records, games, audio books, and magazine parodies (remember the MAD Magazine send-up “The Night Perry Masonmint Lost a Case”?) 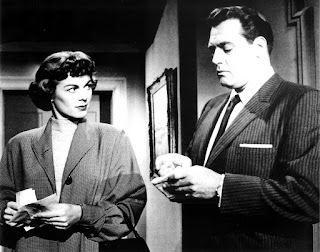 It goes without saying, of course, that a book like this is impossible to read from cover to cover—I skimmed a great deal of its contents to get a general feel for what’s inside, and I’m sure there’s a number of things I could have touched upon but didn’t.  But I can say without exaggeration that if you’re a Mason devotee like Andrew “Grover” Leal or Our Lady of Great Caftan, having this book on your computer is a must—even though the author admits that tomes like The Perry Mason Book are by their very nature destined to become out-of-date.  As for Mr. Davidson, he was able to use his knowledge and expertise on the series to become the co-producer of the Perry Mason: 50th Anniversary Edition DVD set and contribute to such essential reference books as The Complete Directory to Prime-Time Network TV Shows and The Best of Crime & Detective TV.  You can rest assured that I will have The Perry Mason Book at the ready whenever I hear the familiar strains of Park Avenue Beat.
Posted by Ivan G Shreve Jr at 12:00 PM

I have a problem with this book:

Which means I can't get it.

I don't own a Kindle/Nook/Whatever, and have no intention of ever doing so.

This is my inner Luddite, crying in the wilderness ...

... but as someone who's old enough to have seen Perry Mason in network first-run - on a 19-inch Muntz console, living in a part of town where Channel 2 always came in slightly fuzzy, never dreaming that I'd someday own crystal-clear DVDs to watch on an HDMI flatscreen -

Look, I have more than enough trouble working this demon machine in order to write comments like this.

Should Mr. Davidson decide to issue The Perry Mason Book as an actual book - you know, paper, ink, pages, cover, like that - should he deign to make that small concession, he'll have a customer.

Failing that, I'll just have to make do with The Case of the Alliterative Attorney, by Bill Sullivan with Ed Robertson, which covers much of the same territory, and is an actual book.

Yours for holding a line (however futilely) ...

Hey Shrevie, I also got into Perry Mason via those '80s TBS reruns, and I subscribed to the NAAPM newsletter. And like many who watched, I made the assumption that Perry Mason was a lawyer show - actually, it is a mystery show, with a lawyer as its protagonist, and adhered to the conventions of the murder mystery. There were way too many courtroom confessions, but hey, it was adhering to the old TV Code....
Many old hands at mysteries and pulp fiction were recruited to write for the show, including cult fave Robert Leslie Bellem, creator of ultra-slangy PI Dan Turner; Gene Wang, a writer for the Falcon radio show; and Jonathan Latimer, who created the alcoholic private eye Bill Crane. A late addition to the writing staff was James Dean's old college buddy William Bast, who wrote "The Case of the Silent 6" (inspired by the Kitty Genovese incident) and a couple of other scripts.
There was also a Perry Mason comic strip, drawn by Mel Keefer, Frank Thorne and at least one other artist, which pre-dated the TV series.

rnigma broke the stillness of the comments section:

actually, it is a mystery show, with a lawyer as its protagonist, and adhered to the conventions of the murder mystery

As my fellow ClassicFlix colleague Cliff "Sugarball" Weimer describes it: "It's about Tragg, a tough, no-nonsense cop who collars a perp every week only to watch some shyster lawyer get him off the hook."