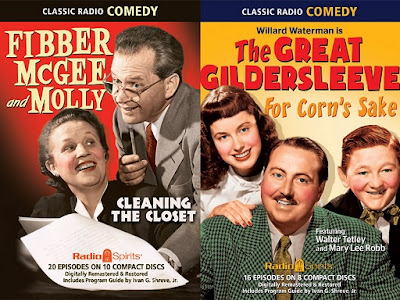 Author-historian John Dunning once mused in the “bible” of old-time radio fans—On the Air: The Encyclopedia of Old-Time Radio—that the three series which best defined the medium were The Shadow, The Lone Ranger…and Fibber McGee & Molly.  Fibber & Molly (the only comedy program on his admittedly short list) hasn’t dated well for some people (“What’s so funny about a guy opening a closet?” someone once asked me completely free of malice) but others (myself included) can spend hours of pleasure listening to the creative wordplay of writer-creator Don Quinn and peerless comedic performances of the show’s stars, the husband-and-wife team of Jim and Marian Jordan. 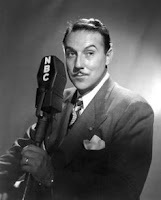 In addition to the Jordans, the cast of Fibber McGee & Molly included veteran performers like Bill Thompson, Gale Gordon, Arthur Q. Bryan, Isabel Randolph, Bea Benaderet, Elvia Allman, Shirley Mitchell, Richard LeGrand and so many others.  From 1939 to 1941, Harold Peary played Fibber’s neighbor and friendly nemesis Throckmorton P. Gildersleeve…who was so well-received as a character that he was “spun-off” onto a successful sitcom, The Great Gildersleeve (more on this in a sec).  (The Fib & Molly show also gave birth to another sitcom, The Marlin Hurt and Beulah Show [later shortened to Beulah], when the titular star of that program became a favorite on the Jordans’ show in 1944.) 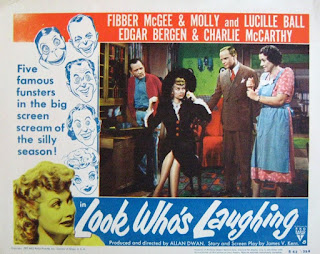 Fibber McGee & Molly had a nearly twenty-five year run on radio: their show was a half-hour staple on NBC from 1935 to 1953, became a weekday quarter-hour from 1953 to 1956, and finished out radio careers with short skits on Monitor from 1957-59.  The Jordans would also star in several movies as their radio counterparts (Look Who’s Laughing, Here We Go Again) and inspired a short-lived TV version (1959-60) that did without Jim and Marian’s services (the boob tube McGees were played by Bob Sweeney and Cathy Lewis).  In their heyday, Jim and Marian Jordan joined the ranks of Jack Benny, Bob Hope, and Edgar Bergen (and Charlie McCarthy!) as radio’s most popular mirthmakers; during the war years, the couple were tireless in their “keeping up” of the nation’s morale. 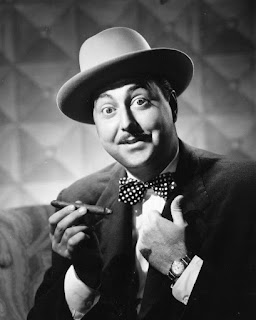 I wrote the liner notes for a Radio Spirits collection featuring many of the series’ wartime broadcasts, Cleaning the Closet, earlier this year…and as blog luck would have it. I have a copy of this set (a 10-CD collection with a MSRP value of $39.98) to give away to one lucky member of the Thrilling Days of Yesteryear faithful.  Maybe it’s because the last contest was such a success or maybe I’m just in a pre-Christmas mood of generosity but I’ve decided to “bundle” this giveaway with a copy of The Great Gildersleeve: For Corn’s Sake—an eight-CD set of broadcasts from Fib & Molly’s “sister” series (valued at $31.95) that also features a booklet composed by your humble narrator.  Gildersleeve was a long-running radio veteran (from 1941 to 1957) that launched a short-lived movie franchise (1942-44) and a brief transition to TV (1955-56).  For Corn’s Sake focuses on broadcasts from 1952 and 1953, when by that time actor Willard Waterman had taken over the role of Summerfield’s water commissioner (and notorious bachelor on the prowl) from series originator Hal Peary (he left the show at the end of the 1949-50 season). 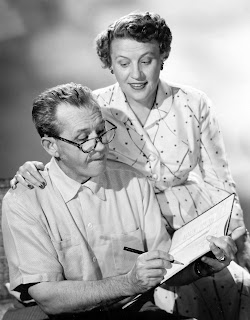 Are you interested?  Of course you are!  Here’s how to enter (oh, for the days of box tops and dimes)…

3) If you’ve won one of the blog’s contests in the past thirty days, it’s the very picture of blog etiquette (blogiquette?) to sit this one out to allow other members of the TDOY faithful a chance to get some fantabulous swag.

4) I will choose one winner—sorry I don’t have enough sets for two this time—Sunday morning and inform the lucky person of their tremendous good fortune.  Keep in mind that when entering, you don’t have to provide a snail-mail address…but I will need it should the roll be called up yonder.

Good luck to everyone who enters this contest—I know the winner is going to love the hours of laughter they’ll spend listening to the antics of Fibber, Molly, & Gildy and I want to extend special thanks to the good people of Radio Spirits for allowing me to distribute freebies of their fine product to OTR fans.  Remember—Thrilling Days of Yesteryear is the phrase that pays!
Posted by Ivan G Shreve Jr at 7:00 AM

My entry is on it's way! Love Fibber and Molly!

My entry is on it's way! Love Fibber and Molly!

And she was as good as her word! (Best of luck to ya!)