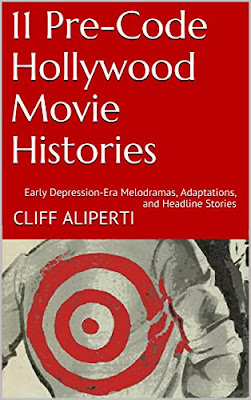 I have heard your pleas, members of the TDOY faithful.  You have been clamoring for more reviews of books dealing with pre-Code motion pictures, and I am here to acquiesce to your demands.  The spotlight in the TDOY Book Club (motto: Oprah who?) today will be on Cliff Aliperti’s 11 Pre-Code Hollywood Movie Histories: Early Depression-Era Melodramas, Adaptations, and Headline Stories.

What’s that?  You say you made no such request?  Well…this is awkward.  Also a case of “tough toenails,” because I took time to read this Kindle selection, dadgummit, and…I guess we’ll just have to make the best of it. 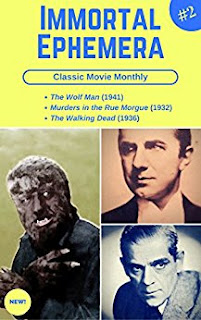 My fellow Classic Movie Blog Association compadre Cliff Aliperti is a Lawn Guyland-based writer who trims the hedges at Immortal Ephemera, celebrating the best in 1930s cinema since 2002 (in addition to offering up nifty vintage memorabilia and collectibles).  The Immortal Ephemera brand is emblazoned on two e-books—Classic Movies Monthly #1 and #2 (a Halloween special!)—and his other published works include Helen Twelvetrees: Perfect Ingenue and Freddie Bartholomew: An Informal Biography.  However, a spending spree at the Kindle Store brought me into contact with 11 Pre-Code Hollywood Movie Histories, which I purchased at the same time as a previous tome spotlighted in this space, Sin and Vice in Black & White.

Mind you, I’m a little uncomfortable comparing both books…but I will say this: both of them would make splendid additions to your movie book library, for the simple reason that there’s no duplication in the content.  I don’t know if this was by design (“Rupe?  Cliff Aliperti here…you aren’t writing an essay on Only Yesterday, are you…?”) or just plain happenstance, but I think it’s dan-dan-dandy that it turned out that way.  Aliperti reviews a number of titles that tend to limbo underneath the pre-Code radar, notably For the Defense (1930) and Washington Merry-Go-Round (1932); on the whole, Cliff’s selections bypass better-known feature films from that era and concentrate on vehicles that are most worthy of rediscovery. 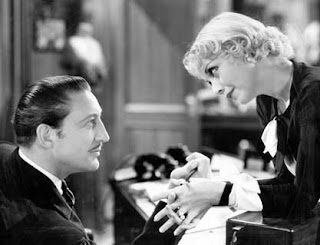 What surprised me most about 11 Pre-Code Hollywood Movie Histories is that Cliff included only one selection from his favorite performer (and beloved pre-Code cad), Warren William.  Aliperti started the first Warren William fan site in 2007, and I’m not going to lie to you—I gambled that Histories would be a little top-heavy with the Warren.  But there’s only one W.W. vehicle reviewed in the book, and it is a goody—1933’s Employees’ Entrance.  It’s an excellent essay—it might be my favorite of all the entries in the book—and despite my disagreement with Cliff’s analysis of William’s character (he sees Warren’s ruthless department store manager as a hero; my lifelong skepticism of capitalism/corporations just won’t let me embrace this) it will persuade you to see the movie in a new and challenging light. 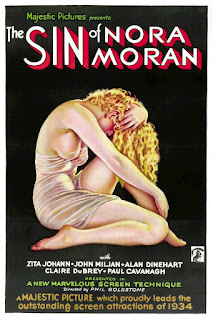 Cliff also has novel takes on a number of movies that have been discussed here at TDOY, including Call Her Savage (1932), City Streets (1931), and The Sin of Nora Moran (1933).  He supplements the essays with colorful background material to put the films in their proper historical context, while offering up tidbits on the film’s stars and other people behind-the-scenes.  Good reviewers tantalize you into wanting to seek out those films you haven’t crossed off your “Must See Movies” list, and Aliperti’s entries on Merry-Go-Round and Only Yesterday (1933—I’ve read the book that inspired this one, but haven’t seen the silver screen version) succeed admirably in that mission.

I’m probably a bigger fan of Hell’s Highway (1932) than Cliff (though I do like how he contrasts it and the better-known I Am a Fugitive from a Chain Gang [1932]), mostly because I’m fascinated by the small oeuvre of Rowland Brown, who directed my favorite of all the pre-Codes, Blood Money (1933).  11 Pre-Code Hollywood Histories rounds out with essays on Show Girl in Hollywood (1930—which aired on The Greatest Cable Channel Known to Mankind™ recently), Gentleman’s Fate (1931—I’ll have to see this one the next time it makes the rounds), and Jimmy the Gent (1934—this one I did see…meh).  Cliff is also generous enough to inform the reader as to the availability of the movies on home video (the e-book was published in 2014, so there have been a few new developments on that score: City Streets is coming to MOD the first of November, which means I’ll have to retire my old Vintage Film Buff copy). 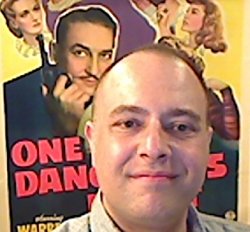 “My name is Cliff Aliperti and I write about old movies when I’m not watching them,” the author declares in a passage at the end of 11 Pre-Code Hollywood Movie Histories; an all-too-familiar mission statement of those of us who blog about classic films because it keeps us out of strip clubs.  (Okay…maybe not all of us.)  “I grew up in a house where black and white movies were every bit as good as color.”  While I wasn’t as fortunate to be raised in similar circumstances (though I don’t have time to get into that right now), it won’t escape your notice that Cliff clearly loves the movies he writes about, and his background in historical research helps immeasurably in making Movie Histories a sensational read and worthy purchase.
Posted by Ivan G Shreve Jr at 7:00 AM

Okay, I may have to go back and see what I said about Hell's Highway because I LOVE Hell's Highway — I'm hoping it's a case of you just love it even more!

Thanks for this write-up! It's funny, I think I get more excited seeing all of these movies mentioned than I do even seeing my name (and big head) pop up.

Hah hah, no collusion or communication with Rupert, though I will say that at the time I published this pre-Code eBook both he and Danny at Pre-Code.com were huge inspirations, as they were the only recognizable names in the Kindle entertainment section! Danny was a big help in other ways too. Anyway, I figured I'd give it a shot, and it turned out fun!

While there very likely will be a "Best of Warren William" in the future, I purposely tried to mix it up in this pre-Code eBook. Different years, different studios, different stars. Of course, Warren and other personal favorites (Alice White, Richard Dix, Sylvia Sidney, Clara Bow, etc., etc.) had to be in there, because mostly I was continuing my quest to try and get new viewers to stuff I love!

Thanks so much for the great review, Ivan, and thank you too for mentioning the new Classic Movie Monthly series! Really appreciate it, my friend!

It's still the best entry in your book, hands down. And to me -- that's great film criticism, the kind that examines movies from a different perspective and generates spirited debate as a result!