Book Review: 101 Horror Movies/101 Sci-Fi Movies You Must See Before You Die 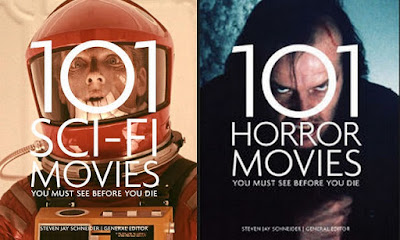 Because life can often be as serendipitous as the movies, the news that two books edited by film critic-scholar Steven Jay Schneider—101 Horror Movies You Must See Before You Die and 101 Sci-Fi Movies You Must See Before You Die—have been re-released this October after languishing in publishing limbo for the past seven years seems like an incredible coinky-dink.  I’m sure it isn’t, of course, but nevertheless this is fantastic news for those of you who have been searching high and low for the perfect gift for that special someone this Halloween.  (Hey…I’m sure there are folks out there who exchange Halloween gifts.  Stop looking me like I’m crazy.  Well, more than you usually do, at any rate.)

The name “Steven Jay Schneider” may be familiar to many of you movie mavens out there: he’s the general editor of 1001 Movies You Must See Before You Die—a hefty reference tome that has influenced a good many movie websites and blogs out there in NetLand, to be sure.  Schneider has since turned to movie producing (he produced the latest Blair Witch reboot, among many films), but maintains an affection for horror movies; his previous books include Horror Film and Psychoanalysis: Freud's Worst Nightmares and Fear Without Frontiers: Horror Cinema Across the Globe.  Publicity material for 101 Horror/101 Sci-Fi states that S.J.’s three favorite horror movies are The Haunting (the 1963 version), Rosemary’s Baby, and The Shining.  (Well…two out of three ain’t bad, I suppose.)

As someone who unabashedly prefers older movies, 101 Horror Movies features essays on many Thrilling Days of Yesteryear favorites—ranging from silent cinema (The Golem, Nosferatu) to the Universal classics (Dracula, Frankenstein, The Wolf Man) to cult essentials (The Masque of the Red Death, The Devil Rides Out).  I was particularly impressed with how the book approaches cinema horror from a wider standpoint than just American movies; you’ll find a lot of entries like Ringu, The Devil’s Backbone, and Onibaba (this will make the rounds on The Greatest Cable Channel Known to Mankind™ in December) …as well as foreign classics like Eyes Without a Face, Black Sunday, and Viy. 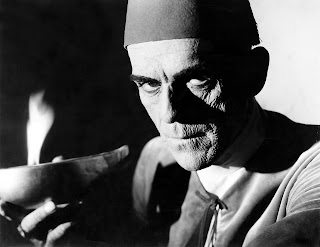 Of course, the handicap with these kinds of books is that they encourage folks (let’s use me as an example) to invariably ask “But what about…?”  You won’t find The Mummy (the 1932 Karloff version) in this book, nor Son of Frankenstein (if you include the first two, why not the third?).  Night of the Demon is glaringly absent, and I’m puzzled by the inclusion of entries like M and Diabolique—while suspenseful, I don’t think I would classify them as horror movies.  And at the risk of having to fight off everyone in the comments section, I’m still bewildered by the popularity of The Shining, one of the most critically-overrated films in the history of cinema.  (Do what damage you must; I only ask that you refrain from insinuating my parents aren’t married.) 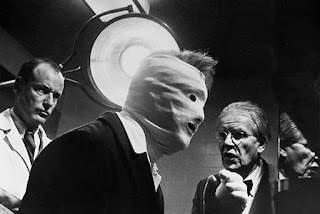 Here’s the explanation why owning both books are essential: 101 Sci-Fi Movies lists movies that could be considered horror, but were probably placed in this volume because of their emphasis on science.  (Science!)  Movies like Them! and Invasion of the Body Snatchers are horror movies to me, though I should stress it’s always troubling to try and box in a movie to just one category.  Just as with 101 Horror Movies, Sci-Fi features silent movie entries (A Trip to the Moon, Metropolis) and some vintage classics like The Invisible Man (the 1933 version) and Things to Come.  (There’s a fifteen-year gap between Things and The Thing from Another World, suggesting that there was a dry spell when it came to science-fiction on the silver screen.)  101 Sci-Fi makes room for some of my genuine favorites: Seconds, Quatermass and the Pit, and Sleeper (it’s in there, honest to my grandma!). 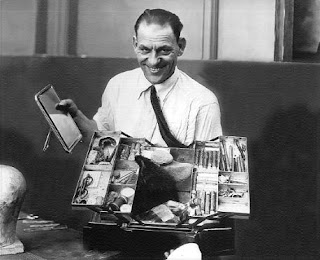 Both 101 Horror and 101 Sci-Fi are larded with rich illustrations, and the essays themselves in both books are clear and concise.  Unfortunately, these entries are not immune from the occasional error; my favorite is this one from Dracula: “Tod Browning made a series of psychologically twisted, cult-like films with Lon Chaney (the actor originally cast as Dracula).  Chaney played a “disturbed” corner of a little love triangle—he was a horribly deformed suitor in Browning’s 1932 Freaks.”  Considering Lon died in 1930 and Freaks came out in 1932…that is quite a feat.  Here’s the thing: Freaks is listed as one of the 101 Horror Movies, and a glance at the cast list reveals no mention of The Man of a Thousand Faces.  (You’d think Schneider would have caught this…maybe he was distracted by being called to the set.)

So here’s the $64 question: are the 101 films in both the Horror and Sci-Fi book releases really movies you must see before departing to that Great Multiplex in the Sky?  Yes.  Yes, they are.  (I’ll be around to check on your progress in about another hour.)  Okay, I’m just being a little facetious; these books should be accepted solely as a guideline for recommendations in case you’re presented with the ultimate movie-watching dilemma: “What haven’t I seen already?”  (Since I was able to check off most of the older movies, I should really seek out more recent titles as The Descent, Let the Right One In, and It Follows.)  I enjoyed poring through both of these books; the only Steven Jay Schneider publication with which I had a previous passing familiarity was 101 Cult Movies You Must See Before You Die (I picked this one up for change at Hamilton Books), and while it was a breezy read it can’t hold a candle to the Danny Peary trilogy (Cult Movies, Cult Movies 2, Cult Movies 3).  I’d highly recommend a purchase of 101 Horror Movies You Must See Before You Die and 101 Sci-Fi Movies You Must See Before You Die; they’re digest-sized, and would fit snugly in that significant other’s Halloween stocking or Trick-or-Treat bag.  Many thanks to Steve Roth at Quatro Publishing for providing TDOY with review copies.
Posted by Ivan G Shreve Jr at 7:00 AM

I enjoy books like these, but I rate them on how many of MY favorites are included. (Modest though I be, I am my favorite film critic because I like all the movies I recommend.) NIGHT OF THE DEMON is a horrible omission! (On the other hand, I applaud leaving out THE MUMMY...which is historically important but a dull affair.) Thanks for the recommendations, Ivan.

Would it be alright to know what updates have been made for both books? My apologies for being so direct and blunt, I'm just searching everywhere because I'm genuinely curious in that.

In response to Anonymous:

No apologies needed for the directness, because you raise a good question. (I’m working with a slight handicap here because I don’t own the previous editions of either book.)

101 Horror Movies: It Follows, Let the Right One In (2008 Swedish version), and Dellamorte Dellamore. (I believe they removed Jacob’s Ladder, Cemetery Man, and The Grudge.)

I hope this helps.

Thank you very much! This helps a great deal. I follow these books, as well as the 1001 movies book, so these updates are always great to know when they happen!