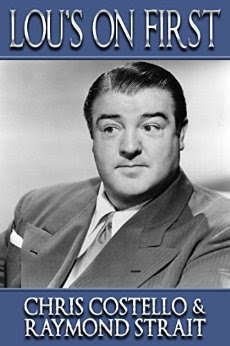 It was my very good Facebook friend (and fellow Jaw-jan) Shiksa Ravelli (whom I affectionately call ‘SKR”) that alerted me to a price decrease in the Kindle edition of Lou’s on First, a biography on the comedic great Lou Costello written by his youngest daughter Christine (Chris) and Raymond Strait.  (Grabbed it for $3.99—there you go, can’t be bad.)  Released three years after the publication of Bob Thomas’ Bud and Lou in 1978 (which became a justly derided TV-movie starring Harvey Korman and Buddy Hackett), Chris wanted to set the record straight with regards to her famous pop…because Thomas got most of the first-hand information in his tome from Eddie Sherman, Abbott & Costello’s longtime business manager.  (This probably won’t come as much of a surprise—but Sherman had an axe to grind on the subject of Lou.  Chris is fairly even-handed when it comes to talking about Eddie…but you kind of get the idea they weren’t swapping Christmas cards after her father’s passing.) 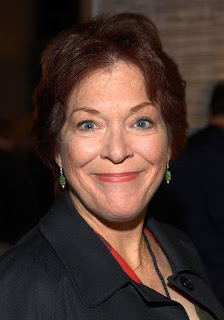 Most of the books that I have read on the famous comedy team are those dealing with their movies; I’d highly recommend Bob Furmanek and Ron Palumbo’s Abbott & Costello in Hollywood as the best, and I dimly remember Stephen Cox & John Lofflin’s The Abbott & Costello Story: Sixty Years of “Who’s on First?” being a good read as well.  (If you’re limited to one purchase, however, go with the Furmanek/Palumbo book.)  Chris’ book, however, offers a much more personal look at her father’s career: a multi-talented funnyman whose life wasn’t always filled with the laughter that he received from grateful audiences.

Paterson, NJ said “hidy” to one of its favorite native sons on March 6, 1906 when Louis Francis Cristillo made his debut in this world.  A gifted high school athlete, Lou at first considered a career in the sweet science, boxing as “Lou King”…but he really harbored a desire to try his luck in Hollywood and the motion picture business.  He worked as a laborer, extra. and stuntman (he did stunt work in 1928’s The Trail of ’98, and can be spotted ringside in the Laurel & Hardy comedy The Battle of the Century [1927]—yet when it became clear that the movies weren’t exactly clamoring for his services, he decided to head for home.  Costello got sidetracked in St. Joseph’s, MO when he landed a job as a “Dutch comic” in a burlesque show. 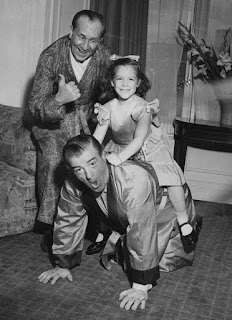 His success in burlesque led him to New York, where he continued to perform in both burlesque and vaudeville…and eventually made the acquaintance of Bud Abbott, another veteran performer.  Abbott had established himself as one of burlesque’s premier straight men, and teaming up with Lou in 1936 would produce comedy gold—notably in their timeless baseball comedy routine, “Who’s on First?”  The duo would eventually conquer Broadway (in Streets of Paris in 1938), radio (they became regulars on The Kate Smith Hour at the same time), and movies—Universal hired them to be the comic relief in 1940’s One Night in the Tropics…which led to their first starring feature film, Buck Privates, in 1941.  It’s no exaggeration to say that their comedies—cheaply filmed yet highly profitable—kept Universal out of the red in the 1940s (though the same thing has also been said about everyone under contract at the studio from Deanna Durbin to Francis the Talking Mule). 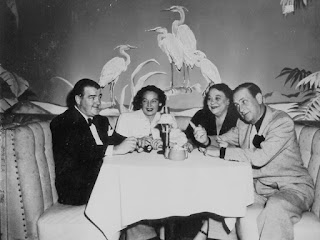 Most of the information on Costello’s (and Abbott’s) career I had read from other sources…so I was pleasantly surprised by revelations that I did not know.  A team that created the miracle of laughter when in front of audiences, both Bud and Lou were cordial to one another off-stage—but not what you would call close buddies.  (In their early days, Bud got 60% of the take due to his straight man status…but once they were America’s #1 movie comedy team, Lou renegotiated their contract to get the bigger split.)  The duo made money and spent it like no tomorrow, which later led to much scrutiny from the IRS…and sadly, their breakup in 1957.  (I wrote liner notes for a Radio Spirits Abbott & Costello collection one time, and was advised to ix-nay on the IRS-way to avoid any trouble with the estate.) 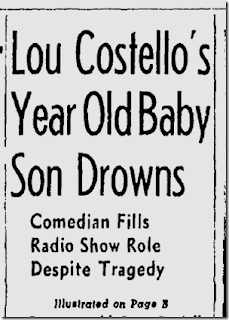 The devastating section of Lou’s On First arrives on that fateful November 4, 1943 date when Lou’s son Lou, Jr. (affectionately known as “Butch”) managed to work his way out of the crib he was in and fell into the family’s swimming pool, drowning as a result.  (Butch was two days’ shy of his first birthday.)  Lou had looked forward to doing his and Bud’s popular radio program that evening because his son was going to get his opportunity to listen to his famous pop clown in the team’s weekly half-hour.  In the tradition of “the show must go on,” Lou fought back tears and wisecracked with his partner that night; it wasn’t until the program’s close that Bud Abbott informed the studio audience of the devastating tragedy that had happened to his better half.

The death of Lou Costello, Jr. haunts the rest of Lou’s On First (I knew it was coming, and even after reading about it I felt like I swallowed a sno-cone): many of Costello’s colleagues have observed that the funnyman was never the same after the incident, and Chris Costello bravely relates that the tragic death of her brother took an immeasurable toll on the family—particularly her mother Anne, who blamed herself till the end of her days in 1959 (she passed away about nine months after her husband).  (The reader will learn that Lou’s family blamed her as well, and it was this family ugliness that led to her mother’s alcoholism.) 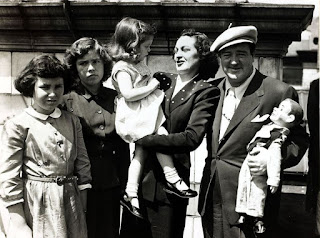 It is not an easy subject to talk about, and yet Chris is able to regale the reader with anecdotes of happier occasions with the Family Costello; her description of how her father loved (I mean loved) Christmas and her dirt-dishing on sisters Patricia (“Paddy”) and Carole''s tumultuous lives will give you a delightful idea of how despite the setbacks, the Costello clan met adversity at every turn and gave it a proper ass-whooping when needed.

My mother’s stepmother (my step-gran) couldn’t stand Abbott & Costello.  She asked me one time when I was watching one of their movies at her house: “How can you watch that nonsense?”  (I seem to recall stronger language used, but I’ll refrain from it.)  The truth is—I enjoyed the heck out of the team’s antics growing up (The Abbott & Costello Show ran like tap water when I was a kid, and when the once-proud AMC showed their movies I made it a point to never miss any of them).  I’m the proud owner of all of their films in the dusty Thrilling Days of Yesteryear archives, and every year it’s a Halloween tradition to run my favorite in their oeuvre, Abbott & Costello Meet Frankenstein (a movie even my mother will watch—and she hates the team almost as much as did my step-gran).  I’ve stated here and elsewhere that despite whether you love them or hate them (and there are a lot of people who feel the latter) they’re an important part of comedy history because their movies and TV shows are a virtual encyclopedia of American burlesque.

If there’s a downside to the Kindle edition of Lou’s On First it’s that it doesn’t contain the photos from the print edition (I knew this going in, of course, but it still would have been nice) and apart from a pin prick of a nitpick (Chris says Bud and Lou’s radio program started in the fall of 1941…but it was actually a year later; the duo were appearing on The Edgar Bergen & Charlie McCarthy Show in 1941) it’s a wonderful book about a man who never really received his due as one of the true comedy greats.  Grab yourself a copy.
Posted by Ivan G Shreve Jr at 7:00 AM

Yes indeed, a very good book, highly recommended. And a nice review of said book...enjoy the photos that accompany it.