“Good evening…friends of the Inner Sanctum…” 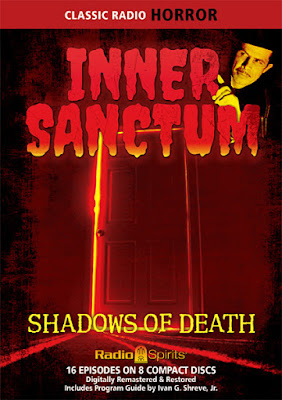 The month of October for my mother is akin to how a child acts at Christmas.  Mom loves horror movies, with a particular jones for the Universal horror films…and anything with a vampire in it, really.  Because operating the DVD/Blu-ray player that’s hooked up to our living room TV is a bit beyond her pay grade, she often asks me to put a movie in for her every evening.  I use “ask” in the loosest interpretation of the word, of course.  It’s more like whining.  (“Pleeeeeeeeeaaase…”) 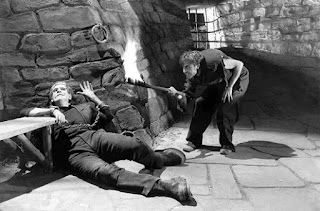 I don’t mind, of course, because I have developed this habit of eating regularly…and Mom is a first-rate cook.  Since I have seen the requested movies on many occasions, however, I tend to just slip the disc into the player and work on the tablet while she enjoys a good old-fashioned thrill and chill.  We lucked out this past Sunday night (October 2) because The Greatest Cable Channel Known to Mankind™ ran the first three entries in the Frankenstein trilogy—Frankenstein (1931), Bride of Frankenstein (1935), and Son of Frankenstein (1939)—so I was thinking that would save a little wear-and-tear on the player.  Ha!  Mom called an audible after the first movie was over, saying she wasn’t up for Bride.  (And people laugh at me when I suggest I was re-dopted.  We watched the last of the Universal Sherlock Holmes features, Dressed to Kill [1946], instead.)  But she did not get away with dissing Bride—since it’s available on TCM on Demand, I downloaded it and we watched it Thursday night.  (“Smoke!  Friend!”) 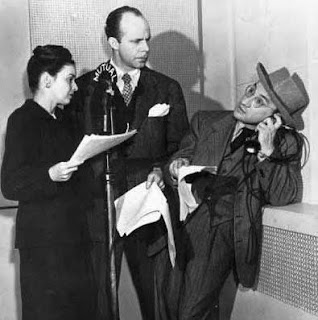 October—and really, fall in general—has always meant old-time radio to me.  I can’t explain exactly why this is the case, but I suspect it has something to do with a vivid memory from 1984, when a Savannah station (WWSA, now right-wing talk radio WKTS) broadcast some OTR horror programs on Halloween Eve…and you couldn’t have stopped me from getting to a radio fast enough.  I recall WWSA ran a couple episodes of Inner Sanctum Mystery, though the only title that really sticks out in my mind is “A Corpse for Halloween” (10/31/49).  Two years earlier, I just happened to be listening to NPR one Sunday afternoon (I was attending Marshall University at the time) and heard an interview with the legendary Arch Oboler…which was my introduction to his excursion in radio horror, Lights Out. 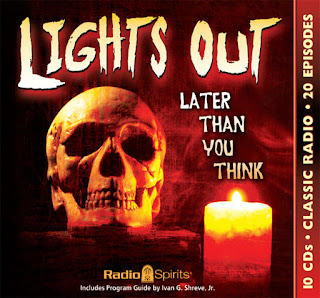 So because I’m wallowing in nostalgia at the moment (I know…you’re completely gobsmacked by this revelation), I came up with an incredible promotional giveaway to celebrate October and all things Halloween.  I wrote liner notes for two Radio Spirits releases: Lights Out: Later Than You Think (released in October of last year and valued at a SRP of $39.98) and Inner Sanctum: Shadows of Death (released this past March—SRP: $31.95).  I have a single copy of each collection to give away, but I thought to myself—why not “bundle” these collections?  (Ah, this DISH terminology just clings to me—does it not?)

So bundle them I have.  Here’s what you need to do to enter for a chance to win.

1) Send me an e-mail with “Inner Sanctum/Lights Out” in the subject header to igsjrotr(at)gmail(dot)com.  You have until 11:59pm EDT on October 15, 2016 to enter, which should be plenty of time to imagine yourselves winning this prize (Thrilling Days of Yesteryear will not be responsible for any goosebumps).

2) Make sure you are a U.S. resident or have a U.S. mailing address.  (I left this information out of the last TDOY giveaway…and if there had been a winner outside of the continental U.S. I would have been obligated to send them their swag.  Suffice it to say, I dodged a bullet.)  Believe me, I would jump at the chance to be able to open these contests to my Canadian cousins and beyond…but despite what you may have heard, I am not a wealthy man.  (I also have little patience for USPS bureaucracy, as a certain smock-wearing postal employee in Savannah will readily attest.)

3) Also, too: if you’ve won one of the blog’s contests in the past thirty days, it’s just good manners to sit this one out to allow other members of the TDOY faithful a chance to get some fantabulous swag.  (We’re on the honor system here—even if it doesn’t seem like it sometimes.)

4) I will choose one winner—sorry I don’t have enough sets for two this time—the next morning and inform the lucky person of their tremendous good fortune.  Keep in mind that when entering, you don’t have to provide a snail-mail address…but I will need it should your name be called.

5) There is no number five. 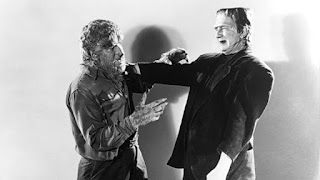 I am jazzed beyond description to be able to offer this promotion, and I hope there are enough Inner Sanctum and Lights Out fans out there to justify a good response (the Escape contest got a very healthy reception…though I'll admit I kind of “goosed” it with a few Facebook mentions).  Remember: you can’t win if you don’t enter—Thrilling Days of Yesteryear is the phrase that pays!

Oh…one more thing.  Turner Classic Movies will run the next three vehicles in Universal’s Frankenstein franchise tomorrow night (Sunday, October 9) beginning at 8pm EDT; The Ghost of Frankenstein (1942), Frankenstein Meets the Wolf Man (1943), and House of Frankenstein (1944).  In anticipation of this event, Mom has duct-taped the remote to her hand so as to keep it out of the clutches of my father.  (Okay, not really—but she did suggest it.)  Until the next time we get together on the blog…pleasant dreams...hmmmm?
Posted by Ivan G Shreve Jr at 7:00 AM

Boy, do I wish I lived somewhere close to Mom! (Well, you too, of course.) We could have such fun in October. I'm a decent cook, not the epicure that Mom is, of course, but I can make fantastic homemade eclairs -- I mean the real thing, with the puff ball, real cream filling, and fudge topping, all from my sweet little hands and enough ingredients to cover the living room and kitchen. I adore October and all the Universal classics, and more still! "Fire bad! Eclairs good!"

I can make fantastic homemade eclairs -- I mean the real thing, with the puff ball, real cream filling, and fudge topping, all from my sweet little hands and enough ingredients to cover the living room and kitchen.

You serrit, kiddo.! (Sadly, my enjoyment of eclairs is a avenue that has been road-blocked.)