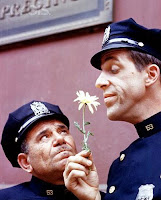 Every year on this date, I seem to get another year older and deeper in debt.  (But I suppose if you consider the alternative, that’s not so bad.)  I briefly thought about doing a birthday list to salute all the people who share a birthday with me but then I said to myself “Do I look like I’m not lazy?” and instead spent of the morning thanking people on Facebook for all the birthday wishes while watching reruns of Car 54, Where are You?  (I should point out that all this Car 54 immersement will pay dividends a week or two down the road…)  So if you are curious as to what other famous people claim September 2 as their natal anniversary date, cha-cha on over to this post and all will be revealed. 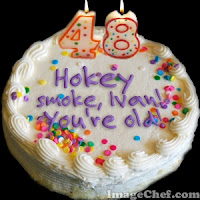 Last night, America’s favorite wacky parents and I went over to my sister Kat’s—or as my father humorously nicknamed it, “the Double K Ranch”…and it sort of stuck afterward—for a nice little birthday bash that included grilled steak and salmon and all the trimmings.  We also had a nice yellow bundt cake for dessert (Mom offered to get me a cake at Publix’s but I told her that spending all that moolah wasn’t necessary if she was up to baking a more inexpensive one…which she was) and in between I was endlessly entertained by my nephew Davis, who while eating his green beans would hold one up in front of me and hiss, and then whisper “snake.”  (Never failed to crack me up.)  I mentioned that my father was nice enough to part with a little scratch and got me a nice used printer/scanner/copier/hovercraft/2-way radio for my birthday present…which has sort of come back to bite me in the ass because I have now become his personal Kinko’s, in charge of running off copies for the various Kramden-like money-making ventures he’s currently embarked upon.  My sister, her partner and nephew Davis got me a nice shirt, a notepad with paper that has “Thrilling Days of Yesteryear” printed on it (sweet!) and an Amazon gift certificate as well…so there’ll no doubt be some DVD-age here in the House of Yesteryear soon.  In fact, there already is...my Mom was nice enough to grab me that Criterion Josef von Sternberg set during Barnes & Noble's 50% off sale earlier this year.  (I also received a swell gift from a certain buh-biff, once I was able to make simple corrections to my Amazon Wish List mailing address that apparently eluded me the first time out.) 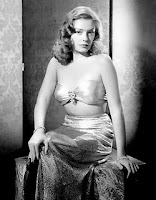 Well, I need to get back to the misadventures of Toody and Muldoon…I just wanted to thank all the people on Facebook (and in particular, the incomparable s.z., Scott C. and Mary C. at World O’Crap, who gave me a nice homina homina homina picture of Jane Greer to gaze lovingly at when things get slow around here) who wished me a happy one on the ninth anniversary of my 39th birthday.  As the Great One himself used to say, “Ooooh, you’re a good group…”  (And very special thanks to my pal “Johnny” B. Goode at Gonna Put Me in the Movies for sending me the link to YouTube goody that kicked off this post.)

Happy Birthday, and have a wonderful year!!

Give my regards to poor, benighted Captain Block.

Today is also the birthday of one of my sisters, and since she is related to MOI, it is an important occasion... That picture of Jane Greer looks like the kind of poster they used to put outside the "adult" tent at carnivals! Wowee-wow-wow (and I'm not even a MAN!) I love your Dad -- "Kramden-like" ventures! If your Mom and he ever go separate ways, I get dibs. (I'm glad I live in Indiana so your Mom can't hit me over the head with a frying pan!) I'm sure that, like Alice Kramden, she wouldn't part with him for all the tea in China!

So did you get the package? The tracking says it has been languishing in a nearby large city for 14+ hours, but I know how accurate tracking is. By that I mean it's not accurate at all, and yes, I DID just explain the joke.

Earlier this year I spent a lot of time trying to find a good picture of Jane to frame and send you and failed... remind me to hire the World O Crap Crew, Internet Mercenary Picture Acquirers the next time. That is a NICE picture!

Happy Belated Birthday, good sir! May your next year be a rich and rewarding one!

That picture of Jane Greer is a STUNNING picture. Honestly, I don't think I ever thought of her as THAT sexy. I wonder why, although we classic movie lovers just think she's great, that she did not go on to become a much bigger star. She was obviously beautiful, had a beautiful smoky voice - it doesn't make sense.

Well, compared to me, Ivan, you're just a little babe in pajamas running around the old homestead. :)

Belated Happy Birthday wishes to you.
It is my chore in life to always be a day late and a dollar short.

I missed your birthday! Hope it was a good one.