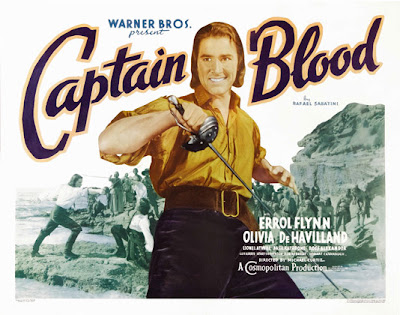 A year or two back I got me a Kindle, and being the cheapskate that I am, I immediately loaded it up with as many public domain books as I could find. Among them was Raphael Sabatini’s swashbuckling adventure novel, Captain Blood. Midway through reading it recently, I decided to revisit the film version. Directed by Michael Curtiz in 1935, it is the first of nine pairings of then-unknowns Errol Flynn and Olivia de Havilland.

Flynn plays Dr. Peter Blood, a physician in 1685 who is called out in the middle of the night to tend the wounds of a political rebel.  Consequently, he himself is convicted of treason against King James and exiled into slavery in the West Indies. There, he is purchased on the whim of Arabella Bishop (de Havilland), the niece of a wealthy plantation owner (Lionel Atwill). As a prank, she arranges for the defiant doctor to treat the governor’s gout, which draws the resentment of the town’s official physicians (Hobart Cavanaugh and Donald Meek).

The doctors conspire to finance Blood’s escape, ridding themselves of this usurper to their profession. Blood intends to take with him a company of his fellow prisoners, but on the eve of their departure a Spanish galleon attacks Port Royal, Blood leads his men to capture the vessel and escape to the high seas. Privateers though they may be, Blood instills in his crew a unity of purpose, and a vow for the fair and ethical disposal of all their booty, including captives, especially women. 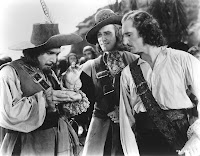 Nevertheless, Blood’s name becomes fear throughout the Caribbean, leading to a partnership with the French pirate Levasseur (Basil Rathbone), who chafes under Blood’s ideals. This builds to a head when Levasseur captures Arabella, who is sailing home after a brief visit to England. With her is Lord Willoughby (Henry Stephenson), who has been tasked by the king to bring an end to the pirate raids in the West Indies.

In a duel to the death with Levasseur, Blood wins the lovely Arabella and rids himself of the cruel French captain with the stroke of a single cutlass. While aboard Blood’s ship, she rebukes the charming buccaneer, who in turn decides to exchange her freedom for his own. Of course any one can see that these two kids are crazy in love, and nothing good will come of all this posturing.

Blood intends to sale to Port Royal even though it will mean not only his death, but that of his crew. Arabella’s uncle is now the governor, and he’s sure to put the lot of them in a noose at the first opportunity.

Arriving at Port Royal, Blood discovers the town under attack by a pair of French ships. Willoughby explains that France and England are at war, and he has been authorized to offer Blood and his crew a place in the British Navy. Naturally, they collectively refuse to serve King James, only to be told by Willoughby that James has been deposed and William III now sits on the throne. 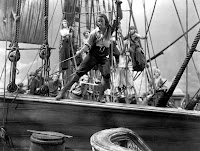 With a fresh wind blowing, Blood orders his vessel into the harbor where, under the guise of the French flag, he is able to take both ships by surprise and save the town from destruction in a dramatic battle sequence. Though filmed mainly with miniatures, process photography and stock footage, it is surprisingly effective.

But what of Blood’s fate? Governor Bishop had abandoned the protection of his station in a misguided and fruitless pursuit of Blood. Willoughby reveals to Bishop that if he’s lucky, the new governor might not hang him for abandoning his post. Of course it’s up to Arabella to plead for clemency, but seeing as how her true love is now the governor, she just might be able to save her uncle from the gallows.

Of course, similar events would be played out a few years later, when Flynn plays yet another dashing rogue who charms a privileged beauty in his quest for justice and loyalty to the King of England, skewering Basil Rathbone in the process. Yes, kids, I’m talking about The Adventures of Robin Hood (1938), also directed by Michael Curtiz.

If it seems that Rathbone made a career out of playing villainous swordsmen, there’s a reason. At the time, he had a reputation as the finest swordsman in Hollywood. His skill was legendary, and it has been claimed he was so good that he could make a novice opponent (usually the film’s hero) appear far better.

Comparing the novel to the film, the movie is of course condensed, and the book perhaps rather wordy by today’s standards. The book harkens back to an earlier time, when adventure novels were epic stories in the vein of The Three Musketeers or Scaramouche. I don’t hold it against the film that it hits mostly the high points of the novel. It’s merely the product of its time – but it’s a mighty good product. Its only fault is that it parallels too closely its younger sibling, the more widely known Adventures of Robin Hood.
Posted by Ivan G Shreve Jr at 8:00 AM

I love Rafael Sabatini's version of CAPTAIN BLOOD as I must say I loved reading THE SEA HAWK which was turned into another Errol Flynn swashbuckler in 1940. This time out though, his lady-love was the rather wooden Brenda Marshall (she married Flynn so she won his heart in real life - at least for a little while.

I loved the film of course and thanks very much for writing about it. I enjoyed your post very much. I could watch these movies any time, any day, any hour. Of course I also love Basil.

As a fan of both Sabatini and Flynn, I enjoyed both novel and adaptation. While Errol is quite good, he obviously became a better actor and that was evident just a few years later with ROBIN HOOD. Still, the charisma was there from the beginning, as was the incredible chemistry with Olivia.

Somehow, I've always liked this better than Robin Hood, probably because of the pirate/sea angle. Of course, when you've got chemistry like Flynn and de Havilland, even a ridiculous whitewash of George Armstrong Custer works. :)

"The Adventures of Robin Hood" has a lot of good things going for it: the lush Technicolor, Basil Rathbone (again) and other great supporting actors like Claude Rains, Eugene Pallett, Una O'Connor and Alan Hale.Even the same director and composer as "Captain Blood".

But I like the earlier film better, too. I have to admit, the pirate angle probably puts a big thumb on the scale, but "Captain Blood" just seems to have a certain something to it that I prefer. It's by far my favorite Korngold score; the sets and cinematography are brilliant; Olivia de Havilland never looked more beautiful. And of course, there's also Basil's outrageous accent.