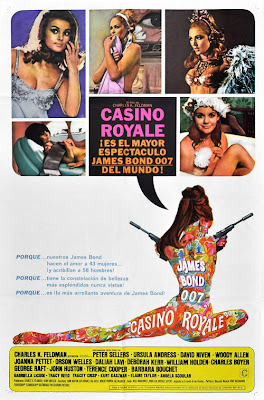 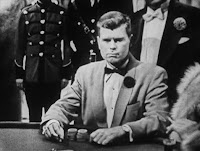 After watching last year’s documentary Everything or Nothing: the Untold Story of 007, I decided I should revisit the original Bond films, including “Casino Royale” as it was presented on CBS in 1954. This episode of the television series Climax! featured an American Jimmy Bond played by Barry Nelson.

As bad as that was, it was only slightly more palatable than the 1967 James Bond spoof of the same name. According to some sources, it was originally intended to be filmed by the Bond producers Albert “Cubby” Brocolli and Harry Saltzman, but the recent partnership with Kevin McClorry on Thunderball (1965) had left a bad taste in their mouths, so Charles K. Feldman, who held the rights to Casino Royale, proceeded without them. 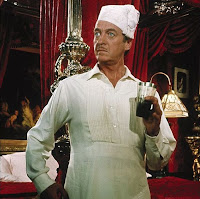 Rather than produce an entirely independent spy film as McClorry would later do with Never Say Never Again (1983), Feldman chose to play the story for laughs. Sure, let’s cast Peter Sellers and Woody Allen, and the laughs will just happen. Of course, in Hollywood that never works.

Starring as Bond is David Niven, brought out of retirement by the assassination of his former boss M (John Huston). Bond immediately takes over the old department, and realizing that James Bond 007 has a target on his chest, he immediately sets out to confuse the enemy – SMERSH – by designating all his agents as James Bond 007 just to confuse the enemy – including his nephew Jimmy (Allen).

With the help of Vesper Lynd (former Bond girl Ursula Andress), a trap is laid for SMERSH operative le Chiffre (Orson Welles) by causing him to lose at baccarat, drawing the enmity of his superiors. Subbing for Bond is baccarat authority Evelyn Tremble (Sellers).

Meanwhile, the real Bond sends his daughter Mata (Joanna Pettet) to infiltrate a SMERSH hive located in West Berlin. It’s trippy in a deChirico sort of way, and merely provides a diversion from the original story while introducing a kidnappable sidekick for later in the film.

The film is dull, despite the hand of six different directors and 10 different writers (most of them, such as Allen, Sellers, Ben Hecht, Jospeh Heller and Billy Wilder) would be uncredited. To call it a comedy is being generous, as there are painfully few laughs to be had. In all, it adds up to 131 minutes of painful watching best left for desperate rainy afternoons, or those days when one is suffering from a cold and misery is such that anything else can hardly do any further harm.
Posted by Ivan G Shreve Jr at 8:00 AM