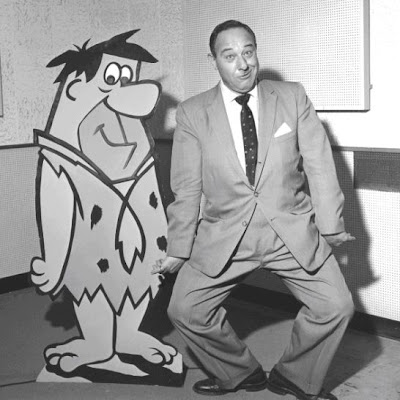 Over at the Radio Spirits blog this morning, I was pleased to write-up a little birthday shout-out to one of old-time radio’s most unsung performers.  I don’t meant to suggest that people are unaware of who he was—actor Alan Reed (born on this date in 1907) will always enjoy his small screen immortality as the voice of caveman Fred Flintstone on TV’s first prime-time animated sitcom, The Flintstones.  But it wasn’t until I became fully immersed in “the hobby” that I realized the amazing versatility of the man. 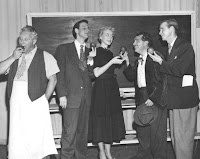 It’s been guesstimated that Reed was accomplished with something like twenty-two different dialects, and he certainly made good use of them, no better example than his hilarious role as Pasquale, owner of Pasquale’s Spaghetti Palace, on the sitcom Life with Luigi.  If you’re not familiar with the show’s premise, an Italian immigrant named Luigi Basco (played by “the celebrated J. Carrol Naish”) arrives in America and doggedly pursues the American Dream by starting his own business (an antique shop) and attending night school to further perfect his English.  Reed’s Pasquale was Luigi’s patron; he funded his friend’s trip to the U.S., and rented out the space Luigi used for his shop.  But Pasquale—who was essentially an Italian version of Amos ‘n’ Andy’s Kingfish—was also a relentless schemer whose ultimate goal for Luigi was to marry him off to his zaftig daughter Rosa (the wonderful Jody Gilbert).

Life with Luigi doesn’t really hold up well today because of its heavy Italian stereotypes.  But if you can get past that, I defy you not to laugh at Reed—he’s falling-down hysterical as Pasquale, who always gets his comeuppance by episode’s end.  One of my favorite bits in the show would have Luigi repeating something his friend said—only phrasing it in the form of an insult…which would prompt Pasquale to observe: “You know, Luigi…when you-a say it, it doesn’t sound-a the same.” 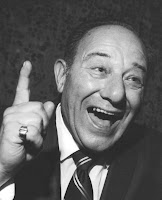 Alan Reed worked alongside many of radio’s top comedians.  He was a member of Fred Allen’s stock company for over a decade, playing the hammy poet Falstaff Openshaw, and he originated the role of Daddy Higgins, the stern parent to Fanny Brice’s Baby Snooks (Hanley Stafford inherited the role because Reed was reluctant to move west when Brice took the show there…but he later wound up playing the part of Daddy’s boss Mr. Weemish).  He worked with Goodman and Jane Ace, Jack Benny, Edgar Bergen, Mel Blanc (yes, even before The Flintstones—Alan was a regular on Mel’s 1946-47 sitcom), Eddie Cantor, Jack Carson, Jimmy Durante, Stan Freberg, Phil Harris and Alice Faye, Rudy Vallee and Alan Young—to name just a few of the many.  Alan was also a regular on classic radio sitcoms like Duffy’s Tavern (as Clancy the cop), The Life of Riley (as Riley’s boss, Mr. Stevenson) and My Friend Irma (as Irma’s boss, Mr. Clyde).  He did quite a bit of dramatic acting as well—he inherited the role of Lt. Walt Levinson from Arthur Q. Bryan on Dick Powell’s Richard Diamond, Private Detective for starters. 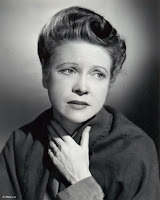 Also celebrating the same birthday as Mr. Reed—in fact, she was born in the exact same year—is “The First Lady of Radio” herself, Lurene Tuttle.  Her radio resume is equally lengthy, and she’s fondly remembered as gal Friday Effie Perrine on The Adventures of Sam Spade…not to mention roles on The Adventures of Ozzie & Harriet (as Harriet’s ma), The Great Gildersleeve (the first Marjorie) and The Red Skelton Show (most of the female characters, notably Junior’s “Mummy”).  She, too, was much in demand in dramatic roles on Dr. Christian, Let George Do It, Night Beat, Suspense, The Whistler and Yours Truly, Johnny Dollar (and believe me, that’s just the tip of the iceberg).  Lurene also made memorable appearances in film (Psycho) and TV (Julia)—but it’s radio for which she’s best remembered here at this ‘umble scrap of the blogosphere.  We’re pleased as Hawaiian Punch to give them a shout-out today!
Posted by Ivan G Shreve Jr at 8:00 AM

Happy Birthday to a versatile actor indeed! Thanks for the heads up!

One of my very favorites, truly a talented man.

Happy Birthday to Alan Reed, who we of Team Bartilucci love not only for his signature performance of lovable loudmouth Fred Flintstone and other comedies, including many Hanna-Barbera cartoons, but also his noir turns in THE POSTMAN ALWAYS RINGS TWICE and heavies on PETER GUNN -- so versatile! Glad to see Lurene Tuttle getting a little love, too, and not just the Sheriff's wife in PSYCHO (not that there's anything wrong with that!). Excellent post, as always!

I'm sure I've watched Reed in one or more of his film roles, but the only time I can actually recall seeing him was the year he served as Grand Marshal of the Hollywood Christmas (née Santa Claus Lane) Parade. We kids had no clue who he was until he bellowed out "Yabba dabba doo!" from his slow-moving convertible, but I remember feeling oddly pleased that he was a big stocky guy like Fred.

Lurene Tuttle's star for television work is a couple of blocks from here, outside the Vegas Seafood Buffet on Hollywood Boulevard. Not exactly a prime spot, but the star commemorating her radio work is on Vine Street, right in front of the Capitol Records building.

Mystery Science Theater 3000 fans will of course remember Lurene from her heartbreaking turn as the love-starved county judge who sentences Mamie Van Doren and Lori Nelson to the World's Sexiest Chain Gang -- not for spite or personal gain, but simply because she's in sexual thrall to cotton-farming gigolo John Russell in Untamed Youth (1957).

not for spite or personal gain, but simply because she's in sexual thrall to cotton-farming gigolo John Russell in Untamed Youth (1957).

Annnnnd that's why I left that credit out on purpose. Ye gods, I think that may be the only recorded instance of me going "Ewwwwwwww!!!" when I watched that.