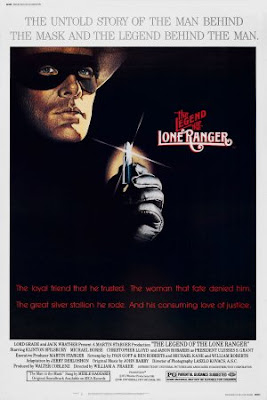 Recently I stumbled across The Legend of the Lone Ranger (1981) on YouTube. Unlike many films on that site, it’s not broken up into multiple segments. It’s presented in its entirety, which one might think to be a copyright infringement, but methinks it’s the only way the film’s owners could get anyone to watch this turkey. 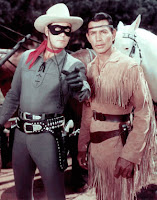 The story behind this film is a multi-layered one of poor choices by the producers. Their first move was alienate their core audience by securing a court order to prevent Clayton Moore from making personal appearances as the Lone Ranger.

Moore had starred on the Lone Ranger TV series in the 1950s, and since then had been making personal appearances in full costume, stumping for the ideals for which the Lone Ranger stood: honesty, justice and good citizenship. Many of his appearances included schools and children’s hospitals

One might believe that having an independent individual make personal appearances on behalf of your property would be a publicity bonanza, but the producers felt otherwise. They wanted to distance themselves from previous interpretations, and in their eyes, Moore’s efforts would only harm their film. It was believed that Moore’s association would undermine the new film, and that some might think the film would star the 65-year-old actor. 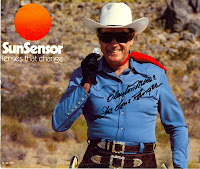 This move proved to be a public relations disaster. Longtime fans, many well into adulthood with children of their own, were outraged. While the film’s producers couldn’t prevent Moore from making personal appearances, the actor was required to avoid any mention or affiliation with the Lone Ranger. He still appeared in cowboy regalia, sporting a very modern pair of sunglasses in place of the trademark black mask. He counter-sued the Wrather Corporation and was able to resume his appearances in costume, which he continued to do until shortly before his death in 1999.

In retrospect, one might question which is worse: to be kicked to the curb by the producers of this cinematic stink bomb, or to be endorsed? Irate fans of the Lone Ranger rallied in support of Moore, encouraging the filmmakers to ally themselves with their hero, hoping he might be given some acknowledgement for his pivotal place in the character’s history.

Not only did they fail to do so, they instead favored actor John Hart, who had briefly replaced Moore during the run of the original show, with a cameo. So for producers of the 1981 film to acknowledge this “usurper” to the mask only aggravated fans further. But it was merely one of many poor choices in casting for the film.

Starring as the Lone Ranger was an unknown actor named Klinton Spilsbury. This would prove to be his only significant role to date, and he quickly faded into the obscurity from whence he came. Pre-release appearances were kept to a minimum, usually those in which speaking could be avoided, such as the Rose Bowl Parade, in which he and co-star Michael Horse appeared in costume, mounted on their respective movie horses. Later, it was revealed that Spilsbury’s dialogue was dubbed by actor James Keach. 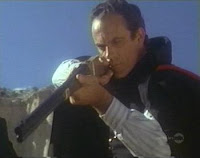 Another questionable casting choice was Christopher Lloyd as the film’s villain, Butch Cavendish. Lloyd was fresh from his role as the drug-addled but lovable Jim Ignatowski on the ABC sit-com Taxi.

The film presented the origin of the Lone Ranger, in a long drawn-out sequence lasting 2/3 of the film. By rescuing President Ulysses S. Grant (Jason Robards) from the evil clutches of Cavendish, the Lone Ranger is awarded carte blanche to operate throughout the West on the side of justice.

One noteworthy moment of the film was a sequence in which stuntman Terry Leonard duplicated a stunt originally performed by master stuntman Yakima Canutt in Stagecoach (1939). It required Leonard to jump from his horse to the team pulling a stagecoach, only to seemingly fall between the horses and drop to the ground as the stage passes over him. Leonard had performed a very similar stunt in Raiders of the Lost Ark, which was released just a few weeks later. Nevertheless, the fact that action fans would see almost identical stunts in two separate movies left many moviegoers feeling one was merely imitating the other. Granted, it could be argued they were both “borrowing” from Stagecoach, but Raiders of the Lost Ark certainly kept the stunt fresh, whereas Legend of the Lone Ranger merely copied it.

Inevitably, the movie opened to horrible reviews, unresponsive audiences and a lackluster box office performance. It disappeared quickly, becoming another statistic in red ink on the financial ledgers of The Wrather Corporation. With a budget of $18 million, the film’s gross was $12.6 million, according to the Internet Movie Data Base. 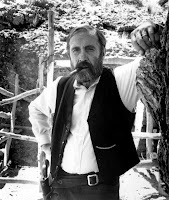 Christopher Lloyd’s career suffered little, achieving success in the Back to the Future films and many other character roles. Jason Robards was already a successful actor and he weathered the storm as well. Michael Horse went on to appear in the critically-acclaimed Twin Peaks.

But Klinton Spilsbury? He’s faded from sight altogether, leaving many a trivia master to ponder, “Who was that masked man?” According to the IMDB.com, he has never appeared in another film. Mr. Spilsbury, if you’re out there, let’s hear from you. No recriminations. You’re as much a victim of bad production choices as we audience members were.
Posted by Ivan G Shreve Jr at 8:00 AM

This review piqued my curiosity and I watched the movie over on YouTube. I regret that now. Thanks all the same!

When this was being made it was known as "The Stoned Ranger" which explains a lot.