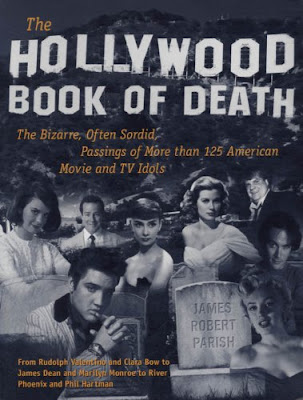 I’d be willing to wager that somewhere in the movie library of every classic film fan there’s a book authored by James Robert Parish.  The odds are in my favor: Parish is the author and/or co-author of over one hundred books on show business and entertainment—ranging from film reference books to Hollywood biographies.  In addition, he serves as a consultant for scads of TV documentaries and biographical programs.  (His publication output, you could joke, makes him “the Martin Grams, Jr. of movie books.”)

I once purchased a copy of JRP’s The Tough Guys from a used bookstore; it’s a collection of biographies on the celebrated careers of James Cagney, Kirk Douglas, Burt Lancaster, Robert Mitchum, Paul Muni, Edward G. Robinson, Robert Ryan, and Franklin Pangborn.  (Okay, I made that last one up.  Just wanted to see if you were still paying attention.)  I strongly suspect that I’ve either sold it by now or that it’s being detained in my father’s personal Guantanamo Bay (a.k.a. his storage shed).  The encouraging thing about many of Parish’s previously published books is that the formerly out-of-print ones (like Tough Guys) have resurfaced on something called Encore Film Book Classics, so titles like The RKO Gals and The Great Cop Pictures are available for Amazon Kindle.  (So maybe I’ll repurchase Tough Guys one of these days.) 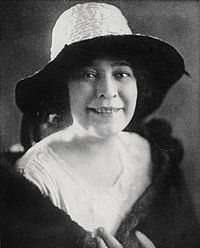 I picked up one of Parish’s non-Encore books, The Hollywood Book of Death: The Bizarre, Often Sordid, Passings of More than 125 American Movie and TV Idols, as a BookBub deal not too long ago (it’s available at Amazon for $13.99—I grabbed it for $1.99).   Had I paid the full tariff for the book, I might have walked away from the reading experience a little ticked off.  JRP’s books have a tendency to separate folks into two camps: those who are full of effusive praise (film critic Rex Reed gushes over The MGM Stock Company as “sort of a Bible around here”) and those who are significantly underwhelmed.  One person remarked in a comment at Amazon: “To add my own known inaccuracy in the Valentino chapter June Mathis is mentioned as dying in a fire.  WHERE the author got this I have no clue...she may not be heavily remembered but every and any simple source out there on here says she died of a heart attack while watching a Broadway play.  Did he just start making stuff up instead of [G]oogling?” 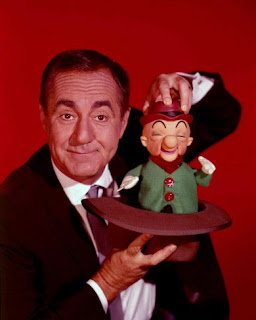 Herein lies the problem.  In a biography of Jeff Chandler, Parish writes that Chandler “spent the next two years on radio in shows like Mr. Dana; Michael Shayne, Detective; and as Eve Arden’s love interest in Our Miss Brooks.”  The “Dana” show is actually titled The Private Practice of Dr. Dana, while Jeff’s “Michael Shayne” gig was The New Adventures of Michael Shayne.  In a section on Jim Backus, “He first portrayed the nearsighted, raspy-voiced Magoo in the animated TV special Mr. Magoo’s Christmas Carol (1962).”  Backus voiced Magoo as far back as the first Magoo cartoon, Ragtime Bear (1949).  (And I’m not sure I’d describe his voice as “raspy,” but that’s a matter of opinion.)  I know this all sounds a little nitpicky, but here’s the problem: if I notice these mistakes (simply due to my familiarity with both actors from an OTR standpoint) how many more boo-boos are in this book that I don’t know about?  Nothing disappoints me more that finding a glaring inaccuracy in a reference book…because this is the sort thing that winds up getting repeated as gospel, and then future authors have to go out of their way to correct the record.  (I’m certainly not immune to passing along bad information, which is why I’m always grateful to folks who point out my slip-ups in the comment section.) 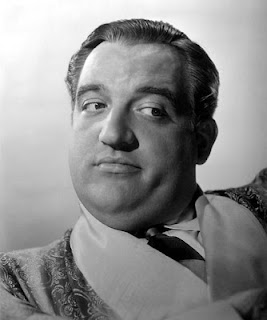 The passings of celebrity notables are split into individual chapters in The Hollywood Book of Death.  There’s “Accidental Deaths” (Laird Cregar, James Dean); “Alcohol and Drugs” (John Gilbert, John Barrymore, John Belushi); “Murders” (Sal Mineo, Carl “Alfalfa” Switzer); and one that nearly had me falling out of my chair with laughter— “Natural Causes.”  I imagine that would apply to a large percentage of famous people who leave this world for a better one, wouldn’t it?  You’ll find out just how large that percentage is with an appendix entitled “Necrology of Notable Hollywood Actors and Directors.”  An additional appendix, “Where Notable Hollywood Actors and Directors are Buried in the United States,” has received some Amazon criticism for its inaccuracies as well.  (The cumo graino salto factor in this book rears its ugly head when you look at the Bibliography and see Kenneth Anger’s Hollywood Babylon listed among the sources.  Oof.) 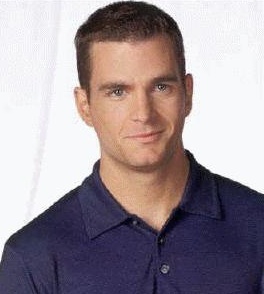 Let me blunt.  If you pay what I did for this book, you’ll probably be satisfied with the read though it might not be a bad idea to have a second or third source handy just to verify the information.  Parish is a good writer, no question; it’s just that he’s a bit sloppy where accuracy is concerned.  I enjoyed reading Book of Death because there are celebrities in this book whose demises I did not have any sort of familiarity with…and there are some celebs I hadn’t even heard of.  David Strickland?  The name rang a faint bell, but it wasn’t until I came to the part where he had a regular role on Brooke Shields’ Suddenly Susan that I remembered who he was and that I had read of his suicide in 1999.  (I have never watched Suddenly Susan; the concepts of combining “Brooke Shields” and “sitcom” make almost as much sense as combining “peanut butter” and “raw onion.”)

Film critic Charles Champlin wrote in 1978: “So far as I can tell, the most prolific producer of compiled movie nostalgia is a New York lawyer named James Robert Parish.”  But prolific and accurate are two different things; my interest in an earlier JRP book (co-authored with William T. Leonard) entitled The Funsters waned after reading reviews that the content was both imprecise and a little on the negative side despite some rare photographs.  In the case of The Hollywood Book of Death, caveat emptor.
Posted by Ivan G Shreve Jr at 7:00 AM

I thought this sounded familiar and went and checked my piles of "to be read" books, but what I have is JRP's The Hollywood Book of Scandals. It'll still be a fun read, but now I know better than to rely on it. I'm going to have to check my shelves for any of his other books, I suspect there are a few lurking there.

Thanks for the informed review!

It'll still be a fun read, but now I know better than to rely on it.

I hope that's the takeaway everyone gets from the Book of Death review, too. It really is a lot of fun but as a source for serious scholarship it's best to be on your guard.