“Want to get away from it all? We offer do not offer you…Escape!” 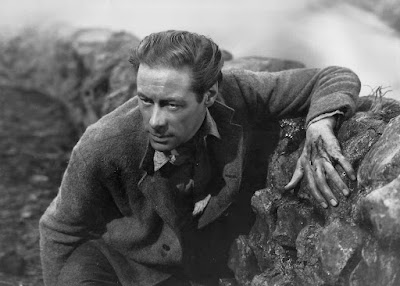 You might remember a little over a week ago that I had to call an Overlooked Films on Tuesdays audible when the DVD of the 1948 film Escape I purchased from Finders Keepers turned out to be the similarly-titled suspense thriller from 1940, with Robert Taylor and Norma Shearer.  I e-mailed Martin Grams about this, just to make sure no one else purchased it (it’s still up on the site, so if you’re thinking about buying a copy…caveat emptor, and other Latin phrases) and as he has always in the past, graciously acknowledged his mistake and pledged to send me a replacement disc tuit suite. 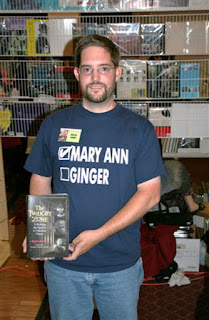 Well, there have been new developments.  He e-mailed me Tuesday to tell me after checking his master copy he did not have the 1948 film.  Again, he was very apologetic (hey: I have, in the past, mistakenly bought DVDs that I already own—movie libraries can be voluminous even if you do maintain a database) and offered to send me a couple of freebies to rectify the error.  (I picked out a couple of cherce titles, too.)  I felt that this notice was in order, seeing as how I did mention that the 1948 Escape would be making an appearance at Thrilling Days of Yesteryear in the near future…so I would like to correct this error by saying “No dice, Chicago.”  (Note: the 1948 Escape is available for viewing at rarefilmm.com, in case you really have a jones to watch the movie.)  I suppose I could purchase it from another vendor…but I’ve come to rely on Martin for a confident guarantee of quality; he’s very particular about obtaining the best print of a film, and is constantly on the lookout for upgrades. 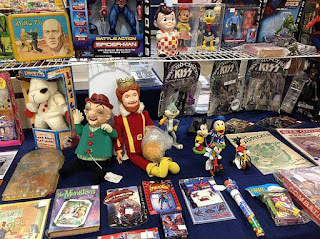 Martin is also well-known for churning out a book on some aspect of old-time radio a week.  (Okay, I’m exaggerating slightly—but there is a reason why I jokingly call him “the Isaac Asimov of OTR books” …he’s quite prolific.)  In addition, Martin's the organizer for the Mid-Atlantic Nostalgia Convention (MANC), an annual event held in Hunt Valley, MD dedicated to a lot of things I discuss here at TDOY: classic movies, vintage TV, old-time radio, etc.  MANC always features a superlative line-up of guest celebrities, and offers nostalgia vendors the opportunity to ply their wares of collectables and memorabilia.  This year, MANC will take place from September 15-17…and if you’re planning on going, I hope you have a keen time.  If you’re like me and have difficulty saving pennies (an all-too familiar lament here in the House of Yesteryear), Martin asked me if I would pass this along to all interested parties:

With increased mobile viewership and faster speeds, live streaming is expanding rapidly. Anyone with high speed internet can watch YouTube videos on their smart phone, iPad, laptop or computer. So it comes as no surprise that old time radio conventions attempt to move into the 21st century with this same service. Two years ago the Mid-Atlantic Nostalgia Convention broke ground by providing live video streaming from the convention. This meant people who lived great distances from Hunt Valley, Maryland, such as California, Alaska, England and Finland could watch the celebrity panels, slide show seminars and old-time radio re-enactments live as it happened... all from the comfort of their computer screen.

DaCast was the company that provided the service but there were three hiccups. One, the system was not free. Viewers had to pay for the service. In fear that video streaming would discourage locals from traveling to the hotel, the cost was set at $20 per day. Two, the hotel did not have superb high speed upload speeds, discovered only at the last minute. Three, a number of viewers discovered they themselves did not have high speed internet at their home and therefore could not watch the streaming smooth enough to enjoy the videos. (Others had no problem with the service.) Thankfully, these complexities have been resolved. 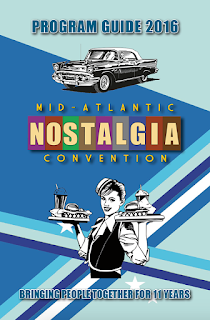 Courtesy of Facebook, there is no costs for video streaming and practically anyone using Facebook has to have some form of high speed internet to watch videos posted on Facebook anyway. This year, from September 15 to 17, the Mid-Atlantic Nostalgia Convention will be video streaming the slide show seminars, celebrity Q&A sessions and old-time radio re-enactments "live" through the Mid Atlantic Nostalgia Convention Facebook page. Viewers can comment during the live broadcasts and celebrity guests can answer questions viewers submit. (Celebrity guests this year include Robert Conrad, Bernie Kopell, Kent McCord, Robert Fuller, Luciana Paluzzi, Britt Ekland, Debra Paget, Kathy Garver, Geri Reischl, Keir Dullea and Gary Lockwood, among others). The service will be provided free.

Kowabunga, cartooners!  Pretty exciting stuff.  Keep an eye out for more Finders Keepers offerings to be reviewed on the blog, and we now return you to our regularly scheduled programming.
Posted by Ivan G Shreve Jr at 12:00 PM