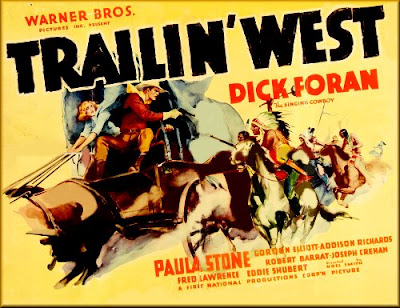 It is 1864.  The Civil War is taking its toll, pitting brother against brother.  (And in some cases, sister against sister.  Truth be told, a lot of sibling rivalry went on.)  This is quite evident in the weary demeanor of The Great Emancipator himself, President Abraham Lincoln (Robert Barrat), who has been briefed by Union Army officers that the situation in Kent City is quite serious if not hopeless.  All attempts to send in an undercover man have been thwarted, so Lincoln gambles on one last roll of the dice.  Hearing Lt. Red Colton (Dick Foran) entertaining White House guests in an adjoining room with a song, Honest Abe likes the cut of Colton’s jib; he assigns Red the task of ferreting out the enemy activity in Kent City before it erupts into guerilla warfare. 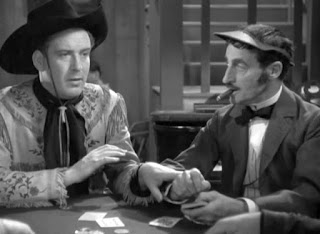 Arriving in Kent City, Colton—masquerading as a gambler named “John Madison”—is a babe in the woods; on his journey there, he was waylaid by a pair of goons in his hotel room…who absconded with his credentials and handed them off to Jefferson Duane (Bill Elliott), the scoundrel behind all of the Kent City subterfuge.  Duane is also working in tandem with the sebaceous Curley Thorne (Addison Richards), the owner of Kent City’s center of night life in The Little Nugget, a saloon/casino.  To bring the evildoers to justice, Colton will have to depend on a newly-acquired sidekick in Happy Simpson (Eddie Schubert) and “dance hall girl” Lucy Blake (Paula Stone)—the Union must survive…at any cost! 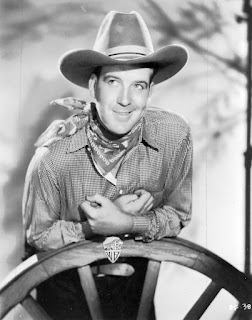 Back when TDOY was involved in the Mayberry Mondays project, I made special note of how actor Dick Foran received a “Special Guest Star” credit on an episode entitled “Palm Springs Cowboy”—highly unusual in that there were only two other actors on Mayberry R.F.D. to receive this accolade, Andy Griffith and Don Knotts, which makes sense because they were both Andy Griffith Show alumni.  I reasoned at the time that since “Cowboy” was Foran’s show business swan song that might have been the reason he was singled out for this honor.

Dick was Warner Brothers’ reigning cowboy star during the 1930s—and not just a cowboy star: “the singing cowboy,” as he was frequently billed in the credits of his starring series of B-Westerns.  The studio’s production supervisor, Bryan Foy, made the decision to get back in the oater game in 1935 and according to western film historian Boyd Magers, Foy had originally asked Lyle Talbot to saddle up (Talbot had a fine singing voice though he didn’t get the opportunity to use it much) but Talbot’s attitude was “Find yourself another guy” because he did not like horses.  So Foran and his pipes got the tap.  “Although the Foran westerns have solid production values and the benefit of strong casts,” writes Magers, “what Warner Bros. never got right was what historian Les Adams called ‘that self-taught, down-home, Mama-and-all-them brand of Americana so easily and naturally projected by Gene Autry, Tex Ritter and Roy Rogers among the singers, and John Wayne, Buck Jones, Bill Elliott and Johnny Mack Brown among the straight action performers.’” 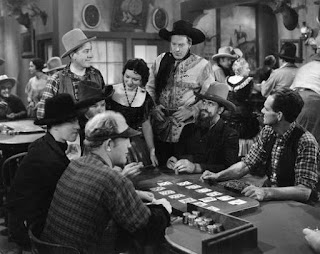 I think Brother Boyd speaks the truth on this: the Foran westerns are pleasant enough (and barely run over an hour, so it’s not like you make a costly time investment by sitting down with one) and while I have a tendency to joke about Dick’s sagebrush career, Foran was actually an underrated actor.  I caught him in a Warner’s B a while back called Gentleman Are Born (1934—he was still being billed as “Nick Foran”) in which he sympathetically played a college graduate having difficulty landing a job (sounds kind of relevant today).  Foran wasn’t just limited to oaters while he was at Warner’s: he turns up in films like The Petrified Forest (1936—where he loses Bette Davis to Leslie Howard, fercrissake), Black Legion (1937), and Four Daughters (1938).  But leave us not make any bones about it—there’s a reason Dick was known as “the matinee idol of B pictures.” 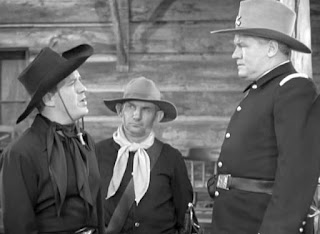 Magers gives Trailin’ West (1936) four stars at Western Clippings.  I don’t think it’s a terrible Western, but I don’t think it’s anything to miss Dancing with the Stars about, either.  (Note: I have not and will not ever watch Dancing with the Stars…I reference it only to seem hipper than I actually am.)  West does have a pretty good supporting cast: the presence of future Saturday afternoon cowboy Bill Elliott (billed here as Gordon Elliott) as a bad guy might generate a few chuckles amongst western fans, and co-bad guy Addison Richards is always welcome company.  (Richards’ character is named “Curley,” which is kind of a tip-off he’s up to no good; unless a movie character named “Curley” has “Nyuk nyuk nyuk” and “I’m a victim of coicumstance!” in his vocabulary, bet on him being a villain.)  Eddie Schubert plays it straight as Dick’s buddy, and I was quite taken with Paula Stone as the woman who becomes Mrs. Red Colton at West’s conclusion (she’s a bit too demure to be a “dance hall girl” but there’s a reason for that, as you might guess).  Other familiar faces include the ubiquitous Joseph Crehan, Carlyle Moore, Jr., and Jim Thorpe (All American); you might also spot stuntman Yakima Canutt and Gunsmoke bartender Glenn Strange as well. 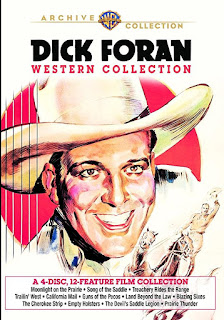 Trailin’ West is well-directed by B-picture veteran Noel M. Smith (he also co-helmed 1942’s Gang Busters, one of my favorite serials) and scripted by Anthony Coldeway; one of the highlights of the picture is a spirited donnybrook between Foran and Richards’ characters (well, their stuntmen if you want to be picky).  But the film’s lasting contribution is a sequence that’s technically not in the film: one of the outtakes appears in the short Breakdowns of 1937, in which Foran tries to mount his faithful steed “Smoke” …and fails miserably in the attempt (“I can't raise my ass off the ground!”).  (This hilarious blooper would become a “Breakdowns” tradition.)  Trailin’ West makes the rounds on The Greatest Cable Channel Known to Mankind™ from time to time (that’s where I caught it), but you can also check it out on the Warner Archive’s Dick Foran Western Collection.
Posted by Ivan G Shreve Jr at 7:00 AM