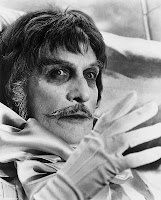 'Dead Alive' was pretty insane, wasn't it? When I wrote about that movie this past May, I said that I see no need for anybody to make another zombie movie ever again because this one goes beyond them all. Still feel that way!

The whole test is kind of time-consuming, but I would like to pass along my all-time favorite horror-movie memory:

House Of Dark Shadows played in Chicago during the month of November 1970. There was an off-year election that year, and one of the major contests was for President of the Cook County Board of Commissioners.
The incumbent Democrat, George Dunne (father of Murphy Dunne, the Blues Brothers's keyboardist), was opposed by Republican Sheriff Joe Woods (the brother of Nixon's very flexible secretary, Rosemary Woods).
Sheriff Woods had a string of TV ads, dramatizations of ordinary citizens griping about what a lousy job the Democrat-dominated was doing.(These dramas were filmed in Hollywood - I recognized several members of Jack Webb Repertory in them.) At the conclusion, Sheriff Woods would march on camera and announce (in a kind of gravelly drawl) that if elected he would solve whatever problem was being groused about.

Anyway, House Of Dark Shadows.
Midway through the movie, there's the standard scene in the big mansion where the characters who haven't been attacked yet are gathered, and someone says something to the effect "Why doesn't somebody do something about these attacks?"
And at that point, somebody in the theater booms out (in a gravelly drawl):
"Ah'm Joe Woods! 'Lect me Pres'dent o' th' Cook County Board an' Ah'll do somethin' 'bout vampahrs!"

As I'd expect, some marvelous answers to this movie quiz, Ivan. THE PIT AND THE PENDULUM remains a favorite of mine. So true about Craven' DEADLY FRIEND. That's a great line-up for the Halloween all-nighter.

The Colossal Man! James Whale! Pit and the Pendulum! The Creature from the Black Lagoon! I knew there was some reason I like to read your blog.... You named just about all my favorites, except for a couple I have never seen which I will try to do now that I've heard of them.

Of course, my favorite TDOY expression in this one is "...I would have bailed out of that mutha faster than you can sing 'Ben'..."