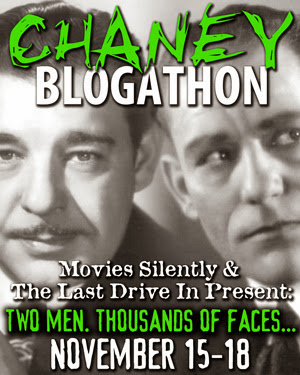 The following essay is Thrilling Days of Yesteryear’s contribution (the second of two) to The Chaney Blogathon: Two Men, Thousands of Faces—which is currently underway from November 15-18 and sponsored by Movies, Silently & The Last Drive-In.  For a complete list of the participating blogs and the subjects being covered, click here. 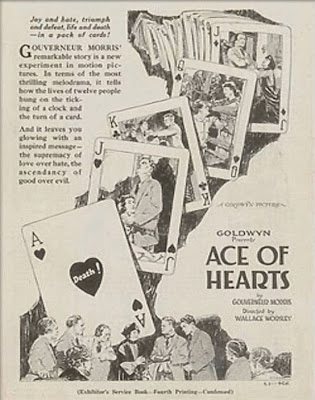 From 1919 to 1921, the United States of America found itself in the grip of what historians would come to call a “Red Scare”—it was believed that because of the Russian Revolution of 1917, that sort of political rebellion would spread to Uncle Sam’s backyard and foment all sorts of trouble from anarchists, Communists, immigrants and any other member of the unwashed who refused to genuflect at the altar of capitalism.  It led to such government interventions as the Sedition Act of 1918 and the infamous “Palmer raids,” which were a series of attempts by the Department of Justice (the “Palmer” was U.S. Attorney General A. Mitchell Palmer) to “round up the usual suspects” and deport them because of their Bolshie leftist leanings. 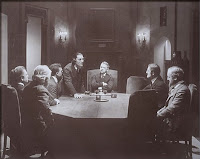 The Red Scare provided grist for several feature films produced in Hollywood at that time, notably a Goldwyn Pictures effort called The Ace of Hearts (1921).  In Hearts—though the members of the secret society are not identified with any sort of political label—an organization carries out assassinations on citizens that the membership believe to be corrupt and a cancer on society’s fee-fee.  The targets are designated as “The Men Who Have Lived Too Long”—and the assassin who will dispose of said target is chosen via a deck of cards…with “the ace of hearts” being the winning ticket in the murder sweepstakes. 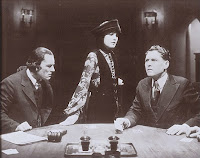 Two members of the organization, Farallone (Lon Chaney) and Forrest (John Bowers), are both in love with the only female of the group—a woman (Leatrice Joy) identified as “Lilith.”  Lilith deals the ace of hearts to Forrest, and announces that as a bonus for winning assassin blackjack, she will tie the knot with him.  Farallone is despondent at this news, but tries to keep his spirits up despite a bit of overacting.  Forrest, who’s been posing as a waiter at the restaurant where the target (Raymond Hatton) dines every day, will dispatch the filthy capitalist to The Great Beyond with a bomb device invented by the group’s chemist (Edwin Wallock). 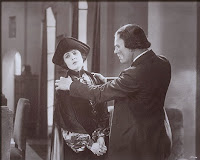 Love, suffice it to say, has a way of changing people.  Lilith and Forrest, now wedded to one another, are starting to have second thoughts about carrying out their mission.  And the downcast Farallone will also be transformed by unrequited love into sacrificing himself on behalf of the couple.

The Ace of Hearts was the second of five films that “The Man of Thousand Faces,” Lon Chaney, made for Sam Goldwyn in the period between his contracts at Universal and MGM.  It’s considered second-tier Chaney, but despite its melodramatic elements I’ve always found it to be an entertaining picture.  It’s an early example of what would be recurring themes in most of the actor’s movies—unrequited love and self-sacrifice—plus it’s interesting to note that Lon doesn’t need elaborate makeup to play his character (he wears only a wig of long hair, to suggest that Farallone is an artist).  With the exception of The Penalty (1920)—which I’ll confess I enjoy a lot more because of its macabre elements—Hearts is the only one of the Goldwyn Pictures productions to survive: the other three presentations—For Those We Love (1921), Voices of the City (1921) and A Blind Bargain (1922)—are lost films. 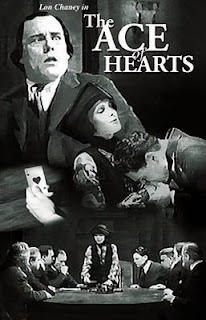 The Penalty was directed by Wallace Worsley and scripted by Gouverneur Morris (based on his novel); both men would re-team with Chaney to make Hearts, and in fact Worsley worked with Lon on three other pictures, including the actor’s classic The Hunchback of Notre Dame (1923).  In an audio commentary for the DVD presentation of Hearts—available on the TCM Archives set The Lon Chaney Collection—makeup artist and Chaney biographer Michael F. Blake explains that producer Sam Goldwyn wasn’t able to rely on a bevy of big motion picture stars at Goldwyn Pictures because of economics, and often had to sign performers to minimal three- or four-picture contracts (that was the case with co-star Leatrice Joy, who left Goldwyn after this film to become Cecil B. DeMille’s female star over at Paramount).  Instead, Goldwyn would keep top scriptwriters like Morris around, believing that the public would go to see movies with strong stories rather than just stars. 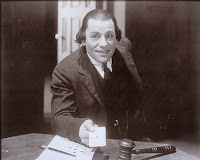 Ace of Hearts is pretty short-and-sweet (it runs about an hour and fifteen minutes) but it tells a cracking good tale and has some nice moments of suspense.  It also demonstrates why I’ve long believed that Lon Chaney was one of the greatest actors of both the silent and sound eras (though he was only able to make one talkie); he certainly was one of the most expressive, and I never cease to be fascinated by how he’s able to use body language and gestures to convey what’s inside his character—qualities that Blake speculates were a necessity since both of Chaney’s parents were deaf and mute.  (I won’t deny that there are a couple of occasions in this movie where Chaney goes a little overboard by hamming it up a little; a stronger director than Worsley might have had him tone it down a tad.) 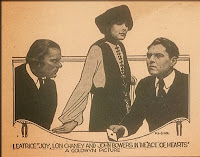 If there’s a flaw in Hearts, it’s that there’s a plot point toward the end that doesn’t make much sense (I’ll keep mum about it for those of you who haven’t seen the film)—but I’ve never let it interfere with my enjoyment of the movie, since I maintain that even the weakest of Chaney films is far and away better than most of the material cranked out today.  Because of the movie’s brevity, you might want to think about pairing it with The Penalty—a swell double feature for that upcoming silent Sunday night.
Posted by Ivan G Shreve Jr at 3:00 PM

I first got to know this movie watching Ben Mankiewicz's intro on YouTube. I love these kinds of films, and with chaney they get even better!
Don't forget to read my contribution to the blogathon! :)
Greetings!

Marvelous! I enjoy the odd red scare film and how can you beat the combination of Lon Chaney and Leatrice Joy? Thanks for another great contribution!

Great stuff. "I never cease to be fascinated by how he’s able to use body language and gestures to convey what’s inside his character." You hit it on the nose. Chaney always stands above the other actors in his films. This was a fun one. Thank you for sharing.