An additional story in the Naked City

No one is as more surprised as I to see the flurry of activity on the blog this week…but since TDOY’s been on a roll since Monday, I figured I’d continue running the table.  (Particularly since a fallow period is headed for the blog soon, as I have a couple of Radio Spirits projects on my plate.)  But today, I’d like to indulge in a bit of bragging. 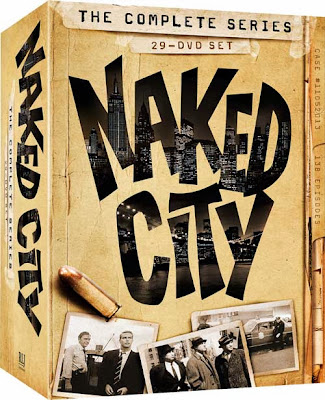 Back in May, I mentioned in passing that TVShowsOnDVD.com had posted an announcement in which RLJ Entertainment (formerly Image Entertainment) had plans to release all 138 episodes of the seminal police drama Naked City in a 29-disc set that, at the time of the announcement, had no official street date (it was later announced that the set would be released on November 5) but was available at Amazon for a pre-order tariff of $99.99 (the set itself retails for $179.98).  Even though I painstakingly parted with the wherewithal to buy the previous not-quite-complete collections/sets released by Image…and even though my religion has strict rules against “double-dipping”…I told myself that I would have to have the set, because Naked City is seriously one of my all-time favorite television shows. 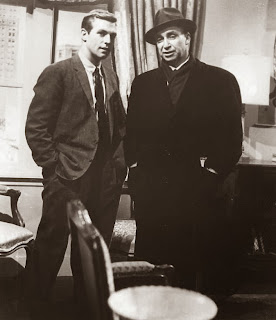 My mother and I have a conversation a month or two after this announcement is made.  She asks me if there’s anything I have my eye on for Christmas, and I tell her the only thing I really want is this set.  After groaning about yet another portion of discs making their way into Rancho Yesteryear, she acquiesces and has me pre-order the set…then issues strict instructions that I am to be surprised on Christmas.

Now…here’s where the story takes an amazing turn.  I do not know for what reason I happened to stop by DVDPriceSearch.com that fateful day in October—lately I’ve been trying to avoid the site because I’m weak when it comes to temptation—but I cannot ignore an entry on that site that says the Naked City set I’ve pre-ordered from Amazon is available from Walmart…

My eyes leave their sockets for a brief second as if I were in a Tex Avery cartoon.  I could not believe it—it had to be some sort of error.  So I mosey on over to Walmart.com…and sure enough, the set is selling for $25.48.  I even read the description, just to make sure they haven’t misidentified the collection.  Same one they’re selling at Amazon (and by this stage of the game, a few other places as well).

I was convinced that this was a huge mistake, and that Walmart was going to find some way to weasel out of this…but I was also convinced that if I didn’t avail myself of this deal of a lifetime, I would hate myself for the rest of the time I have on Earth.  So I ordered a copy, and set aside enough time to wait until I was sure I would be getting this deal before I canceled the Amazon pre-order.  The last week in October, the Amazon order was cancelled.  I figured, what the hell—if it does turn out to be a boo-boo, I can always re-order…and what’s more, I’ll shop around to see if there’s a better deal (as I said earlier, a few more places had started selling it since my initial order).

The package arrived yesterday—and it’s the same set as the one advertised on Amazon.  I am convinced Baby Jeebus loves me, because I cannot believe my good fortune—even my mother high-fived me, and we all know how she feels about DVDs.  The word on this apparently got out on Facebook—I know Video Watchdog’s Tim Lucas shouted it from the rooftops—and after who-knows-how-many-people capitalized on this deal, the $99 price eventually returned to the listing.  I checked the site the other day and I couldn’t even find the set in the inventory; somebody must have removed it after the company took the bath they did on the discounted sets.  (The imp in me wants to believe that the poor schmendrick responsible was demoted for this fox paw and is now on greeter duty.)

I do feel bad about buying this from Walmart, though…because there’s no love lost between me and a corporation who represents everything I despise about corporations, and I try not to patronize the business as a rule.  But I simply couldn’t pass this up, and I’m sure if I light a few candles and say a few novenas during the holidays that will right the situation.  (I just need to be able to remember where the church is.)

In other DVD news, Barnes & (Ig)Noble are running their annual 50%-off Criterion sale as of this post…and because B&N appears doomed to be crushed under the boot heel of the gigantic behemoth known as Amazon, I figured I’d drop a few shekels (okay, it was more like a lot of shekels) into their coffers and buy a few nice things for myself (including The Uninvited, which Laura has sold me on with her latest ClassicFlix review).  (Brandie proved to be a first-rate saleswoman as well, since I grabbed I Married a Witch while I was at it.) I also pre-ordered the City Lights release, which is being sold as a Blu-ray/DVD combo…so on the off-chance I eventually do acquire a Blu-ray player I’ll have something to play in it.
Posted by Ivan G Shreve Jr at 7:00 AM

All part of my evil plan, my good man. (Thanks for the shout-out!)

I am a huge Stirling Silliphant fan. I love both Naked City and Route 66. I'll have to get the complete series at some point (even at $99 it would be worth it)!

I love both Naked City and Route 66.

Brothers under the skin. They're both my two favorite dramatic shows from the 1960s.

Isn't awesome when things work out like that? THE NAKED CITY was a landmark TV series, with buckets of gritty style and brilliant scripts. It's a great addition to any DVD collection.

Isn't awesome when things work out like that? THE NAKED CITY was a landmark TV series, with buckets of gritty style and brilliant scripts. It's a great addition to any DVD collection.

I've used up the rest of my karma in this lifetime, but in retrospect I think it was worth it.