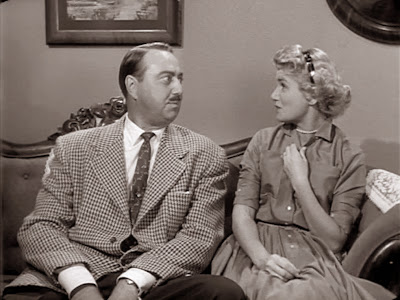 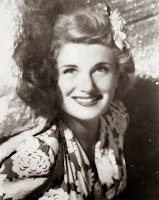 Three years ago on the blog, I gave a birthday shout-out to the incomparable OTR actress Shirley Mitchell, who was celebrating her ninety-first natal anniversary.  Well, Ms. Mitchell is still going strong at age ninety-four, and you can get a quick look at her amazing career over at the Radio Spirits blog this a.m.  The screen capture above is from an appearance she made on The Real McCoys in 1957—to my knowledge, that was the only time she was on the program—and she played the wife of Mac Maginnis, a minor character on the program essayed by another OTR vet, Willard Waterman.  I find this episode (“Luke Gets His Freedom”) a delight because Mitchell and Waterman performed together on The Great Gildersleeve, the radio comedy featuring Shirley’s signature turn as flirtatious Southern belle (from Savannah, y’all) Leila Ransom.  (I also don’t think it’s a coincidence that Mrs. Maginnis’ first name is “Lela.”)  The two performers also worked in tandem on Leave it to Joan, a 1949-50 radio sitcom starring Joan Davis, and while Waterman was still alive they attended many an old-time radio convention.

As you’ll read over at Radio Spirits, Shirley worked on a good many sitcoms (the item to your left is an item from an issue of Radio Mirror that mentions she was a regular on a short-lived program, Tales of Willie Piper) where Southern women sort of became her stock-in-trade.  Mitchell is also the last surviving recurring cast member of I Love Lucy; she played one of Lucy Ricardo’s chums, Marion Strong, in three episodes of that iconic sitcom.  Thrilling Days of Yesteryear wishes her much love and luck on her birthday today—she is truly a show business treasure.

And speaking of Thrilling Days of Yesteryear (Gad! These segueways just write themselves!) it was ten years ago on this date when I was hanging out with some of the cool kids in the smoking area in back of the high school and one of them suggested I get myself a blog so that the others wouldn’t knock my cap off or steal my lunch money.  And thus…TDOY was born.  I honestly have difficulty believing sometimes that I’ve been doing this for a decade, and I’ve been enormously fortunate in that it’s not only something I love doing but that it opened up avenues to where I’ve been richly compensated (in a monetary sense), as witnessed by my long association with Radio Spirits (thanks to Mark, Nancy, Karen and the rest of them for all the work and support) and newest gig with ClassicFlix.  Thanks to L.B. for coming up with the idea in the first place; thanks to S.Z. and Scott C. for showing me not only how simple it was but also how I would never be able to compete with World O’Crap (not even after massive humor injections); thanks to Stacia for being my BBFF; thanks to Philip Schweier for the guest reviewery and cub reporters Larry Shell and Tom Stillabower; and thanks to each and every one of you out there who have encouraged my behavior over the past ten years.  Baby, you’re the greatest.
Posted by Ivan G Shreve Jr at 8:00 AM

I always loved Victor Borge when I was a kid -- he said that laughter is the closest distance between two people. Congrats on the anniversary and I'm glad for the closeness.

A big congrats on your anniversary, Ivan!

Ahhh, they grow up so fast. Pretty soon TDOY will be developing pimples and an interest in girls, and the next thing you know it'll be asking to borrow the car, and uttering bits of incomprehensible teen lingo, like "download," "USB", and "reet!"

Happy blogiversary, Ivan, and many more (because reading this joint is a habit, and I'm in too deep to go cold turkey).

Congrats on your first ten years of blogging, and here's to many more!

"And all those little people out there in the dark..."