The Duke is Tops: A Double Feature Guest Review 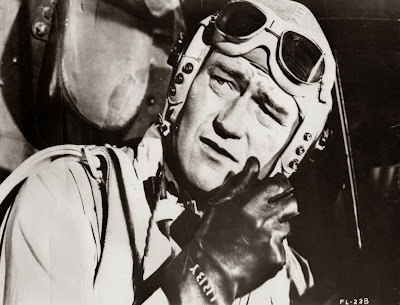 After several years of being featured in Westerns, John Wayne first put on a uniform in the forgettable Seven Sinners (1940), in which he got second billing behind the incomparable Marlene Dietrich. In 1942, he starred in Flying Tigers as Capt. Jim Gordon of the American Volunteer Group, better remembered as the flying Tigers. The AVG was a group of American flyers helping defend the Chinese people against the invading Japanese forces. It’s a fairly standard formulaic war tale, elevated by the presence of the Duke at the peak of his manly charm.

The story begins with battle between Flying Tigers and Japanese bombers, in which the Tigers lose one of their younger members. Gordon journeys to Rangoon to see what kind of enlistees he might be able to scare up. Waiting for him is Blackie Bales (Edmund MacDonald), an experienced flyer trying to live down a questionable past. Gordon isn’t inclined to take him on, until an impassioned plea by Mrs. Bales (Mae Clark) changes his mind. Also along for the ride is Woody Jason (John Carroll), a carefree hot-shot who makes it clear from the get-go he’s only interested in one thing: the $500 bounty for each Japanese pilot shot down.

Jason quickly alienates most of the other men with his grand-standing. He and Blackie lock horns over Jason’s habit of swooping in for the kill at the last minute.  Jason is given a lot to think about when Blackie is forced to bail out in the heat of battle. Without Jason to protect him on the way down, he and his parachute are an easy target for Japanese fighters. To ease his guilt, Jason pays a visit to Mrs. Bales, handing over some money he says belonged to Blackie. 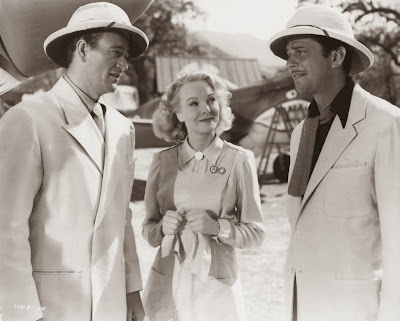 There’s a further softening when Jason tries to make time with Gordon’s girl, Anna Lee (Brooke Elliott), a British nurse stationed at the airfield. She takes him to an orphanage where Jason entertains the children with parlor tricks. Anna Lee, at first a little frosty toward Jason, begins to thaw.

As the war against the Japanese escalates, the squadron is assigned night patrol, requiring each of the men to undergo a physical. Hap Smith (Paul Kelly), Gordon’s second-in-command is grounded following the revelation that his eyesight is failing him. But when Jason and Anna Lee leave the post for a date, Hap takes off in Jason’s plane to cover for him.

Typical of war films, Hap’s handicap in the air costs him his life. Returning to the airfield, Gordon tells Jason and Anna Lee, “I hope you two had a good time. Hap paid the check.” 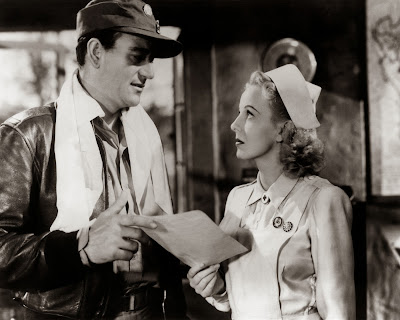 Finally, Jason begins to see the light, and in the aftermath of December 7, 1941, American strikes against the Japanese take on an increased urgency. With Japanese supplies moving by train, Gordon cooks up a plan to use a less-conspicuous cargo plane to drop nitroglycerin on the enemy. He’s instructed to locate a volunteer for what is very likely a one-way mission, but in manly Duke fashion, Gordon isn’t going to ask one of his men to do something he’s not prepared to do himself. But on board the plane he finds Jason waiting for him. He manages to convince Gordon they stand a better chance together than one of them would alone.

Bombing the bridge is successful, but as they attack the train itself, Jason is wounded by flak. Once Gordon bails out, he aims the plane and rides it down in an appropriate kamikaze attack.

The film is easily predictable by anyone who’s seen more than a few war films of the era, thanks to writers Keith Garnet and Barry Trivers. John Wayne is in top form as the hard-as-nails commander of the squadron. David Miller’s direction is superb, the action is fierce, with some top-notch (for the day) special effects. Highly recommended.

Nine years later, Wayne would play another squadron commander in another Keith Garnet story. But rather than a formulaic adventure story, Leathernecks is a glimpse inside the lives of Marine pilots during WW II.

Maj. Daniel Xavier Kirby (Wayne) is the new commander of VMF-247 (“Wildcats”); Capt. Carl Griffin (Robert Ryan) is his executive officer. Kirby believes the potential for air support for ground troops, and Griff is more than willing to agree with him. However, he wins no favors from the men when one of the flyers breaks formation in pursuit of an enemy observer plane. He gets the plane but ends up having to ditch his due to lack of fuel. As result, Kirby intends to court martial the pilot.

For much of the film, Griff acts as the peace-maker as more incidents arise to drive a greater wedge between Major Kirby and his men. Death, injury and more death seems to the pilots’ steady diet during the ongoing battle in the Pacific. Kirby drives the men relentlessly, not because he’s a hard-ass, but because there’s a war on, a little sacrifice now just might save more than a few lives later – even if it means sending men to their deaths. 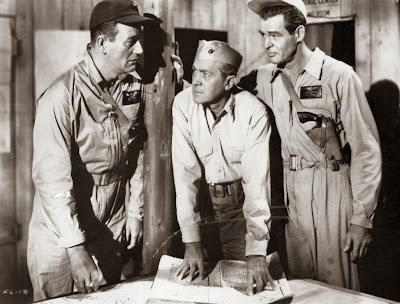 This becomes clear when the two commander’s are faced with two assignments: one is a milk run, manned by rookie pilots, the other more dangerous mission is assigned to the veterans. Griff suggests he command the milk run, and Kirby counters with the idea of one of the new pilots replacing him in the more hazardous mission. Griff balks at the idea of having to choose a flyer whose lack of combat experience will place him at greater risk.

Kirby explains this is why Griff failed to be given the command of the squadron in the first place, and it leads Griff to have to make a tough choice later in the film during a key battle.

In between the moody bravado of both officers, the audience witnesses brief glimpses of typical life in the armed service. MSgt. Clancy (Jay C. Flippen) is a conniving trickster of a sergeant, squirreling away various critical needs for the men and blaming it on others. One of the more amusing scenes is when the pilots write home, and we are shown the recipients of the letters. Several depict families and affection; the last one shows a floozy who seems to be the life of everyone’s party. 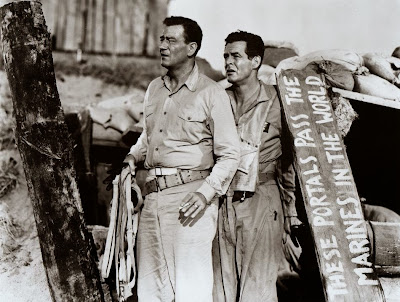 Whereas Flying Tigers made use of miniatures for its battle scenes, Leathernecks has the advantage of actual war footage. Legend has it some came from Japanese sources. While it might add a greater sense of realism for some, I found the transition from Hollywood to historical footage a little jarring, but your mileage may vary.
Posted by Ivan G Shreve Jr at 8:00 AM

Standard formulaic war tale? Yes, but along with the Duke, it is a far better film than synopses make it out to be.

I can't help but compare it to the dreadful Eagle Squadron where the Americans show a thing or two to the Nazis and those snooty Brits. Eagle Squadron has a stupidly implausible story line that is embarrassing.The Flying Tigers, on the other hand, shows the Chinese allies as mute witness to the war and they are shown as masters of communications. The AVG pilots, the Flying Tigers, are American mercenaries fighting for a good cause. They are shown t be more than devil-may-care flyboys who laugh at the face of death. These are men bitten by the Depression, finally making money after long and hard searches for work. Sure, there is the blustery John Carroll, but his character is well dimensioned and resentment of him by the squadron is natural and deserved. The scenes with Duke and Paul Kelly are very well acted. Also, the realistic attitude of the fliers comes across well. These men are not hollow, wide eyed men who just know that they're going to win the war. They are measured and their view is one of looking for a means of stopping the enemy. The only major fault, and this is REALLY pushing it, is the aircraft are not real P-40s but mock up planes not capable of flight. That said, and with a desperate set of aircraft footage, the film is better than most of its time. Again, the terrible Eagle Squadron comes to mind.