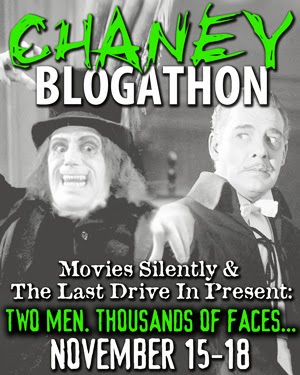 The following essay is Thrilling Days of Yesteryear’s contribution to The Chaney Blogathon: Two Men, Thousands of Faces—which is currently underway from November 15-18 and sponsored by Movies, Silently & The Last Drive-In.  For a complete list of the participating blogs and the subjects being covered, click here…and for that one person who’s not seen the following film—this is your spoiler warning. 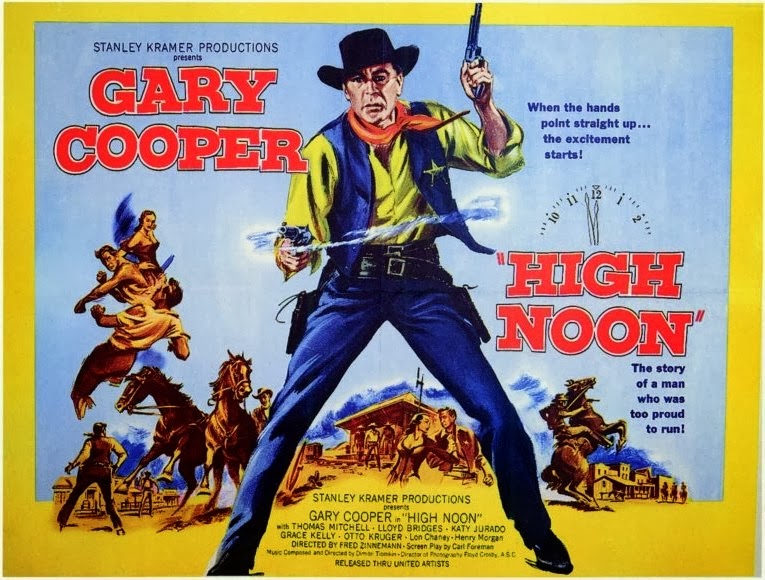 Hadleyville marshal Will Kane (Gary Cooper) has just tied the knot with Quaker bride Amy Fowler (Grace Kelly) when he learns of trouble a-brewing via a telegram.  Five years earlier, Kane was responsible for sending the man who ran the town—outlaw Frank Miller (Ian MacDonald)—to prison for murder…and although Miller was sentenced to be hung, he has instead been paroled and is scheduled to arrive in Hadleyville on the noon train.  Miller’s brother Ben (Sheb Wooley) and two of his associates, Jim Pierce (Robert J. Wilke) and Jack Colby (Lee Van Cleef), are already waiting at the depot for Frank’s return.

Several members of Hadleyville’s town council—including mayor Jonas Henderson (Thomas Mitchell) and Martin Howe (Lon Chaney, Jr.), the man who got Kane his job as marshal—suggest to Will that he beat a hasty retreat…and he and Amy are soon on the first (and fastest) wagon out of Hadleyville.  But Will’s sense of duty won’t let him run like a rabbit; he knows that the town’s new lawman isn’t due to arrive until tomorrow…and what’s more, a man like Miller will come after him wherever he sets down stakes.

The couple returns to town, though Amy informs Will that her pacifism will not allow her to stick around and watch his fool self be killed.  Will’s attempts to solicit help in repelling the eventual danger that is Miller and his gang are rebuffed at every turn: his deputy Harvey Pell (Lloyd Bridges) refuses to pitch in unless Kane lobbies the council to appoint him marshal; many of the townsfolk (particularly those running the saloon and hotel concessions) are actually enthusiastic about the business that will result with Miller’s return; and an endeavor to appeal to several citizens during a church service results in mostly a bunch of speeches filled with sound and fury, signifying nothing.

The hour of noon is at hand, and Amy prepares to leave Hadleyville by train along with Helen Ramirez (Katy Jurado), a Latino businesswoman who once knew Kane very well and in the Biblical sense before Will met Amy.  (Ramirez was also well acquainted with Frank Miller, which is why she’s folded her tent and headed for points unknown.)  The two women board the same train that Miller has just stepped off of, and he joins the other three men strolling into town, preparing to shoot Kane down.  Through grit, determination and a little ingenuity (not to mention a moment where Quaker Amy abandons her principles to gun one of them down through the window of the marshal’s office) Kane comes through his ordeal…and in preparing to leave the town with Amy, throws his badge down in disgust at the townsfolk. 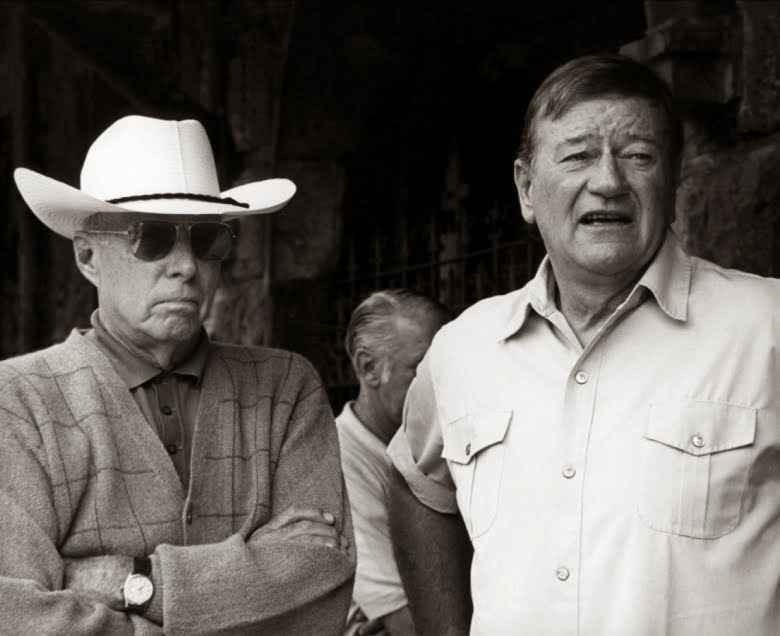 In a recent post at The Classic TV and Film Café, the topic of director Howard Hawks’ reaction to the 1952 western High Noon was broached…which included the now legendary criticism from Mr. H: “I didn't think a good sheriff was going to go running around town like a chicken with his head off asking for help.  And who saves him? His Quaker wife. That isn't my idea of a good Western.”  The legend then has it that Hawks made Rio Bravo (1959) with John Wayne (who in a 1971 Playboy interview tagged Noon as “the most un-American thing I’ve ever seen in my whole life”) as a conservative response to the movie they both so disliked. 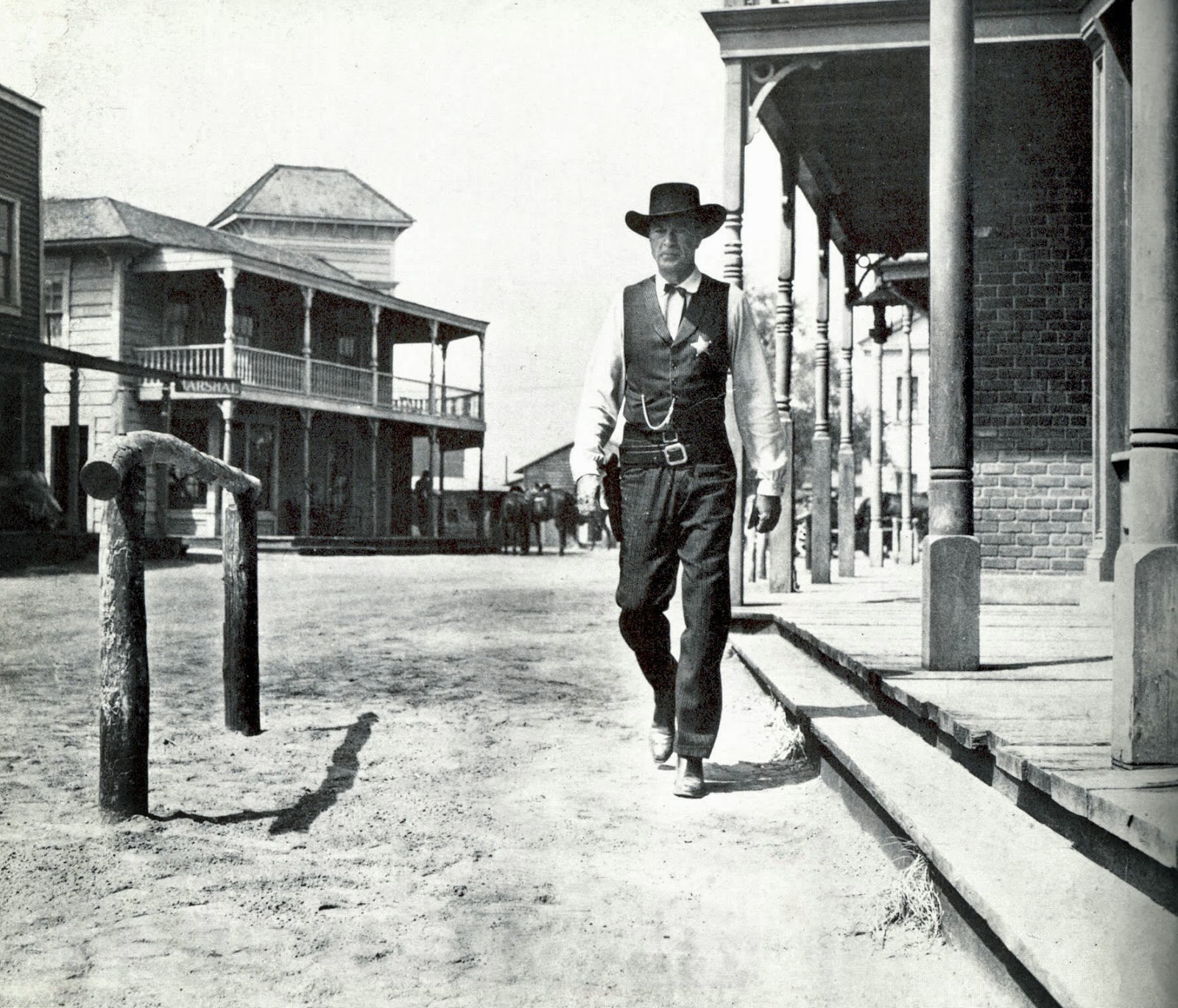 With all due respect to Howie and the Duke—and mostly because I think their remake of Bravo, El Dorado (1967), is a far better film—this is all complete and utter bollocks.  High Noon is a great Western, and rests snugly in my top three movie oaters of all time.  Besides, you don’t get to complain about a lawman (the character of Will Kane is not a sheriff, but a marshal) “asking for help” or depending on assistance from “his Quaker wife” when your movie needs “a game-legged old man and a drunk”—not to mention a lock-jawed Ricky Nelson—to bail out its hero.  (High Noon’s director, the great Fred Zinnemann, dismissed Hawks’ comments by saying: “I admire Hawks very much—I only wish he’d leave my films alone!”) 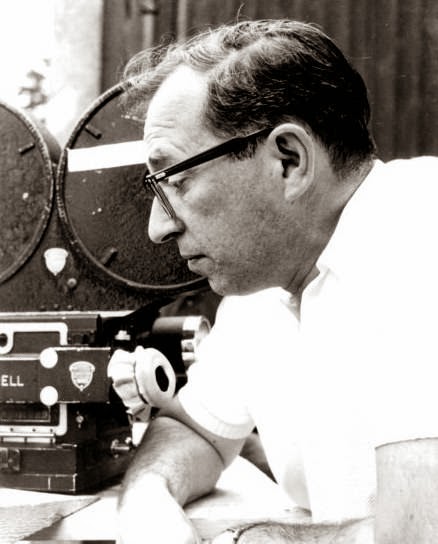 Screenwriter Carl Foreman always claimed that High Noon was essentially an allegory about Hollywood at the time the movie was produced, which I’m convinced is one of the main reasons why I’ve always championed the film, despite criticism that Foreman’s view was a bit narrow.  You see, I have an affinity for westerns…but I love those westerns that challenge the orthodoxy of what has long been a conservative film genre, like Johnny Guitar (1954) and Silver Lode (1954).  I’ve lost count of how many times I’ve watched High Noon, and it seems that each time I do watch it I find something in it I missed on a previous viewing.  There’s an ambiguity to its narrative, and the psychology of the film (a town that knows a psycho killer is arriving soon will do nothing to save itself) has fascinated me since the first time I sat down and watched it with my father. The script and direction are first-rate, as is the editing (which won an Oscar for Elmo Williams and Harry W. Gerstad)…but what I love most about the film is the pitch-perfect casting.  Gary Cooper was always more movie star than actor but his Best Actor Oscar was richly deserved.  Grace Kelly, as the “Quaker wife,” is also great (she always complained of her stiffness in the role but it’s just what her character needed), as are Katy Jurado (High Noon made me a fan of hers for life), Otto Kruger, Thomas Mitchell and Lloyd Bridges.  The film is virtually larded with character greats…which brings us to the man of the blogathon: Lon Chaney, Jr.

Lon, Jr. has a small but memorable role as Martin Howe, the ex-lawman who was a role model to Will Kane as a kid, inspiring him to follow in his footsteps.  (Howe later reveals the cynicism about his career to Kane, intoning wistfully: “It’s a great life—you risk your skin catchin’ killers and the juries turn ‘em loose so they can come back and shoot at ya again.”)  In the film, Kane believes he can depend on Martin to lend a hand when Miller and Company arrive…but he learns to his dismay that Martin plans to sit this one out:

You know how I feel about you…but I ain’t goin’ with ya… (He looks at his hands) Seems like a man with busted knuckles didn’t need arthritis, too—don’t it?  Naw…I couldn’t do nothin’ for ya…you’d be worried about me…you’d get yourself killed worryin’ about me…it’s too one-sided like it is… 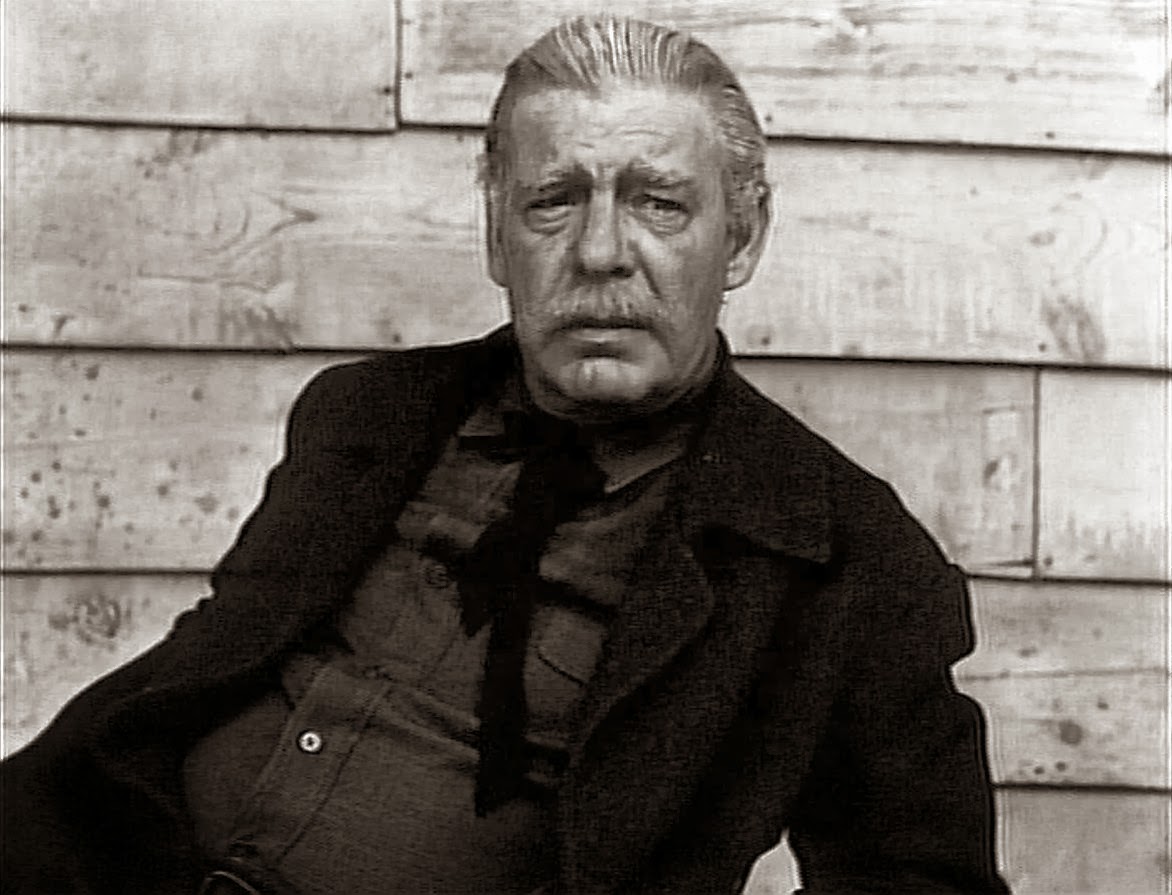 Among the actors considered for the part of Howe were TDOY fave Jay C. Flippen and Victor McLaglen—but Zinnemann wanted Chaney because of the actor’s “flat voice,” which he thought was perfect for the world-weary ex-lawman.  It’s one of Lon’s finest hours onscreen, particularly the wonderful observation (also made by Otto Kruger’s Judge Mettrick in an earlier scene) that “It’s all happenin’ too sudden…people gotta talk themselves into law and order before they do anything about it.  Maybe because down deep…they don’t care…they just don’t care.”  It’s a statement that can be applied to a lot of things (I always hear Lon’s voice in my head when I read something outrageous about politics), and one that answers the question “Why won’t anybody help that guy?” better than anything else in the picture.

“It’s all for nothin’, Will,” remarks Howe sadly as Kane takes leave of his old friend.  “It’s all for nothin’.”  Chaney’s role here and his turn as “Big Sam” in The Defiant Ones (1958) remain two of his very best acting showcases from the twilight of his career.
Posted by Ivan G Shreve Jr at 1:30 PM

Thanks for the review of one of my favorite movies. I especially enjoyed your points about the criticism leveled against the film. Nail hit firmly on the head!

I'm very happy you picked this one. It is not an obvious choice, but Chaney's performance is wonderful. Zinneman was right. His voice is an important part of the character.

Lon Chaney doesn't have a very big role in this film, but it's important - and he gives a wonderful performance.

Wonderful review of a fantastic movie!