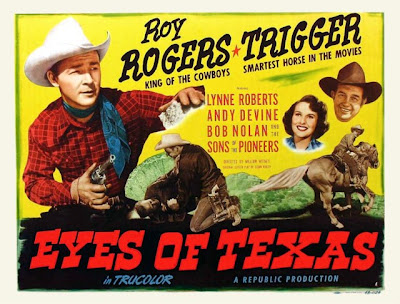 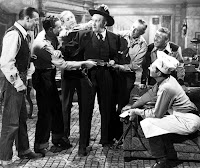 Camp Cameron is a boys’ camp built and run by wealthy Thad Cameron (Francis Ford)—whose nephew Frank was MIA in the war, and for which the camp is dedicated, taking in other boys whose fathers perished under similar circumstances.  Thad, however, will learn via telegram that Frank is still alive, and so he pays a visit to his attorney: grandmotherly Hattie Walters (Nana Bryant).  Excited about the news (Thad’s been estranged from Frank for twenty years, having had a disagreement with Thad’s ma), Cameron directs Hattie to change his will: instead of leaving his fortune to the camp, he’ll split his estate between the boys and the newly-found Frank.  On his way back to , Thad is attacked by a pack of wolves and killed…wolves that would actually appear to be wild dogs.  They’re rounded up by a pair of no-goodniks, Vic Rabin (Roy Barcroft) and his partner Pete (Pascale Perry)…but one of the dogs was apparently shot by Thad, and the two men elect not to hunt for the dead canine.

The appearance of the “wolves”—who in addition to the murder of Thad Cameron have been attacking livestock and making trouble for local ranchers—has brought U.S. Marshal Roy Rogers (himself) riding into town on Trigger (the smartest horse in the movies).  (In fact, Trigger has a memorable run-in with henchman Vic, who makes the foolish mistake of trying to clobber the horse with a pitchfork.)  Visiting his old friend Cookie Bullfincher (Andy Devine, a doctor in this one), Roy lets on that he’s working on behalf of the insurance company that’s paid off on the stockmen’s policies…and that he personally has doubts as to whether wolves were responsible for Thad’s death.  But is also anxious to meet up with his old pals The Sons of the Pioneers (who are running the camp), so he plans to head out that way…and Cookie asks if he can join him, seeing as he has to make a house call at Hattie’s.

Hattie, it would seem, is not the sweet little old lady with a law degree that she appears to be.  She informs Bob Nolan and the rest of the Pioneers that “Uncle” Thad left all his money to nephew Frank, and the camp has been cut out of the will.  When pressed for details, Hattie has one of her “spells”—according to Doc Bullfincher, she has a “coronary occlusion” (“A bad ticker,” he explains.)  Learning from cook Pat Brady that a wolf was spotted in the direction of Timber Ridge, the two of them ride off in that direction and discover the injured dog from the attack on Thad.  is able to befriend the dog (with some help from Trigger) and he takes the canine back into town, where Cookie and nurse Penny Thatcher (Lynne Roberts) nurture the newly named “El Lobo” back to health.

The discovery of the dog starts to worry Rabin; it turns out that he’s in the employ of Hattie, who’s responsible for Thad’s death by training the dogs to be homicidal mutts.  (She’s evil…eevill!!!)  Hattie learns that has asked the insurance company to hold up the money from Thad’s estate, so she whips up public sentiment against our hero by accusing him of wanting to sabotage the camp.  A petition gets started among the townsfolk to request Roy be stripped of his marshaling duties, and at a meeting Roy ends up decking Cookie when his pleas to those assembled to let him handle the matter are ignored.  As Hattie and Vic leave the meeting, they put the snatch on Lobo when they discover him in the back of a surrey. 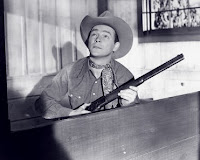 Roy’s punching out of Cookie has cost him his badge…as it turns out, this was his plan all along—with him disgraced in the eyes of the other townspeople, he’s free to work on clearing up the matter involving Thad’s murder.  He experiences a setback when Vic, Pete and a few other goons take him outside of town and beat/whip the living $%#@ out of him; he’s rescued by Cookie and Penny just in the nick of time.  Hattie, in the interim, has decided to put Plan B in action in order to speed up the insurance paying off—she arranges for nephew Frank Cameron (Danny Morton) arrives in town to claim his inheritance.  But he’s a fake (he’s ex-con “Frank Dennis”; the real nephew died during the war) and statements that he makes at a welcome party held in his honor tip off to the deception.  Ironically (irony can be pretty ironic sometimes), Dennis’ greed is the catalyst for bringing down Hattie and her operation (like you would actually doubt Roy Freaking Rogers wouldn’t come out on top).

Anyone who’s ever dismissed Roy Rogers movies as just average singing cowboy vehicles needs to become well-acquainted with Eyes of Texas (1948), one of the most action-packed and violent entries in the western star’s oeuvre.  There are sequences in this film that would not be out of place in an “A” western; the wolf attack on Thad Cameron is pretty sobering stuff for its time, and Roy’s beating at the hands of henchman Barcroft and his stooges doesn’t (if you’ll pardon the pun) pull any punches either.  Eyes is another one of the great Roy Rogers-William Witney collaborations (Witney being the Republic Studios director who cut his teeth on cliffhanger serials before graduating to the product), with a suspenseful script courtesy of scribe Sloan Nibley (who also penned Night Time in , the premier entry in our B-Western Wednesdays series). 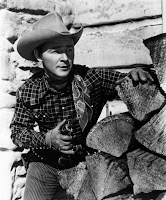 Eyes of Texas features one of the most formidable villains ever to grace a Rogers oater…and is played by Nana Bryant, a veteran character thespian best known for matronly and motherly movie roles in films like Theodora Goes Wild, The Adventures of Tom Sawyer and The Reluctant Dragon (she plays Robert Benchley’s wife in that Disney film).  Her last onscreen role was as a Mother Superior in The Private War of Major Benson in 1955; by that time she was a cast member on TV’s Our Miss Brooks (as the owner of the private school where Connie and Mr. Conklin ended up in the sitcom’s last season) but her death on Christmas Eve of that year necessitated her being replaced by Isabel Randolph (as Bryant’s character’s sister).  Hattie Walters, as played by Bryant, doesn’t have much of a backstory; we never really learn why she’s so pure dagnasty evil but it doesn’t really matter much in the big picture.  She does meet a particularly grisly fate: Lobo, the dog adopted by Roy Rogers (played by his real-life canine Bullet in his film debut), never really liked Hattie and when he returns to her house she dies of a heart attack when he lunges for her, literally scaring her to death.

I thought it sort of odd that Bryant’s Walters goes down so easy (her demise could have come straight out of a Disney film) but I was pleased by the fact that Roy Barcroft’s Vic isn’t rounded up until the final minutes of the film.  Barcroft, the man to whom I frequently refer as “the baddest serial villain of them all,” is engaged in a shootout with Roy in a stable at the end of Eyes when he manages to wound Roy with his rifle…but that shot sets off a blaze in the makeshift fort he’s built out of hay bales and Barcroft is nearly barbecued to death.  They just don’t make them any meaner than Roy B.; he attempts to beat Trigger early in the film (with the horse having other ideas), and then about midway he and a bunch of goons give our hero a right pummeling, finally tying Roy to the back of a runaway horse (the dummy they used for this stunt is a little unconvincing).  He’s even pressed into service to dispose of “nephew” Frank when Mr. Dennis decides he wants a bigger cut of the take by shoving him into the basement where the vicious dogs are being kept.

Lynne Roberts had a long history working with Roy Rogers, appearing in some of his earlier Republic films (billed as “Mary Hart”); she also played leading lady in two of the studio’s serials, The Lone Ranger and Dick Tracy Returns (where she was billed in both as “Lynn Roberts”—before the extra “e”).  Lynne’s character of Nurse Penny figures in two amusing gags in Eyes where she ends up doused with water (the second one at the end has her grumbling “This is where I came in!”).  Other character greats you’ll recognize include Stanley Blystone (as the sheriff) and Francis Ford, who plays the doomed Thad Cameron.  Ford, who appeared in many of his brother John’s films, sort of surprised me in this role because he was actually “cleaned up” for a change (when I think of Francis, it’s as the grizzled old halfwit who winds up hung along with Dana Andrews and Anthony Quinn in The Ox-Bow Incident). 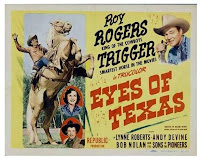 Normally, I don’t mind Andy Devine as the comic relief in Roy Rogers’ films (I know for some he’s an acquired taste) but for some odd reason I had difficulty buying into his Cookie Bullfincher being a doctor in this one.  Future TV sidekick Pat Brady has a couple of amusing moments (his line “My corns are wore to a frazzle” brought Chet Lauck’s Lum Edwards of Lum ‘n’ Abner to mind), and even sings lead on a number he does with the Sons of the Pioneers, Graveyard Filler of the West.  (The Pioneers and sing two additional numbers, Texas Trails and Padre of Old San Antone; all three of them penned by Pioneer Tim Spencer.)  When many of the Roy Rogers films were shown on TV they’d often be whittled down to less than an hour, meaning the musical numbers were often scrapped—this DVD I purchased is the full seventy-minute version…but is not in “Trucolor,” as the original negative is apparently lost.

Eyes of Texas has been released in a number of DVD formats and the fact that Alpha Video has paired it with another Rogers film, Grand Canyon Trail, would seem to hint that it’s in the public domain (and if it isn’t, somebody’s in trouble for making it available for free download here).  It’s a top-notch outing for The King of the Cowboys, and I’m glad I was able to track down a copy at DeepDiscount.com (Motto: “Thanks for the swimming pool, Iv!”) when the company was having a clearance sale (I also grabbed a copy of Dangerous Assignment: The Complete Series…much to my mother’s chagrin).  I know whenever I do a review of a Rogers-Witney film I’m bound to be biased, but I really enjoyed this one (so thanks to the anonymous commenter who recommended it) and I think you will, too.
Posted by Ivan G Shreve Jr at 3:00 PM

I've never seen this movie - I'll have to watch for it. Thanks!